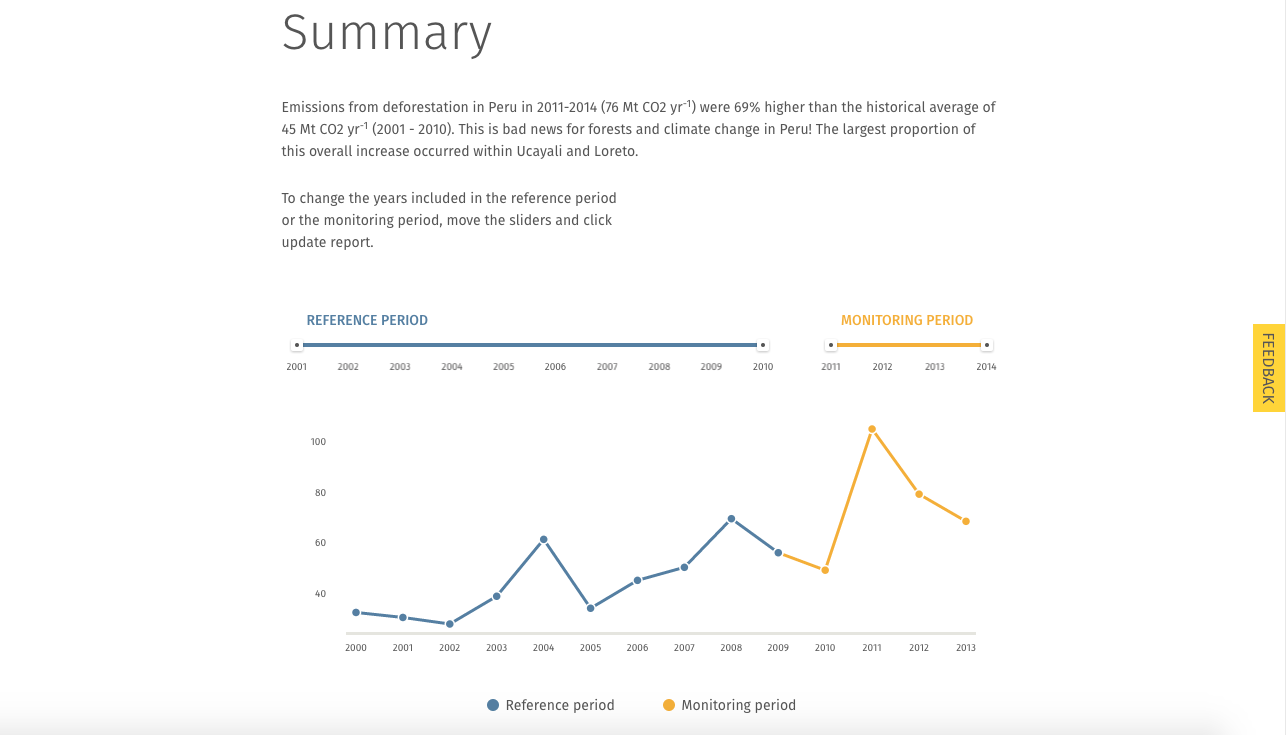 By Nancy Harris and Carolyn Ciciarelli

Since GFW Climate launched in Paris last December, we have been hard at work to move users beyond just viewing pixels on a map to better understanding how those pixels translate to real world impacts on international climate change mitigation efforts. GFW Climate has released three new features that make this easier than ever.

1. Monitor progress on international forest commitments in near real-time

A new feature in GFW Climate’s Insights section shows a country’s cumulative, year-to-date forest loss and its associated emissions by combining weekly GLAD tree cover loss alerts with forest carbon stock data. Users can take this information and track how a country’s current emissions stacks up against its emissions from past years as well as their stated climate goals. The feature also includes a thumbnail map showing where each week’s GLAD alerts were most concentrated.

What does this mean for monitoring forest commitments? In 2014, leaders around the world endorsed the New York Declaration on Forests (NYDF), which set a goal to cut global natural forest loss in half by 2020 and end it by 2030. Though not all countries signed the NYDF, these ambitious targets cannot be achieved without the help of the world’s most forest-rich countries.

The new near real-time emissions feature makes it easier to see the progress signatories are making toward their commitments, as well as track how other non-signatory, but heavily forested nations factor into this global effort. So far, data show little to no progress in slowing historical rates of forest loss or its associated emissions in countries where data are available (Brazil, Peru, Republic of Congo, Uganda and Kalimantan in Indonesia).

GFW Climate is packed with satellite-based tree cover loss and emissions data. Now users can generate a custom report using independent, consistent and credible data that show how a country’s recent forest loss and emissions have changed compared to a historical baseline defined by the user. The report also provides information about where a country’s changes in emissions were most pronounced and explains the scope and assumptions used to generate the estimates.

Last year, forests got another boost on the international climate agenda with the inclusion of REDD+ (an acronym for Reducing Emissions from Deforestation and Forest Degradation), which pays highly-forested countries to prevent emissions by reducing deforestation and forest degradation, in the Paris Agreement. Tropical countries that would benefit the most from REDD+ are at various stages of developing their own reliable national forest monitoring systems to track forest emissions and emissions reduction. Some countries, like Brazil, have sophisticated monitoring technologies in place, while others still depend on inconsistent and outdated methods. Until all countries have timely, accurate and operational systems in place, GFW Climate’s custom reports can help fill the information gap.

3. See how forests are incorporated into Nationally Determined Contributions

On GFW Climate’s country pages, users can see how each country has incorporated the forest and land use sector in its commitment to achieve climate mitigation and adaptation starting in 2020 (Nationally Determined Contribution) under the Paris climate agreement. Some countries include forests as part of their strategy to achieving an economy-wide greenhouse gas mitigation target, others set mitigation targets specific to the forest and land use sector and others set non-GHG related targets, such as increasing forest cover to a specific level. Although the level of focus on forests varies greatly, the fact that many countries mention forests specifically is a major step forward. 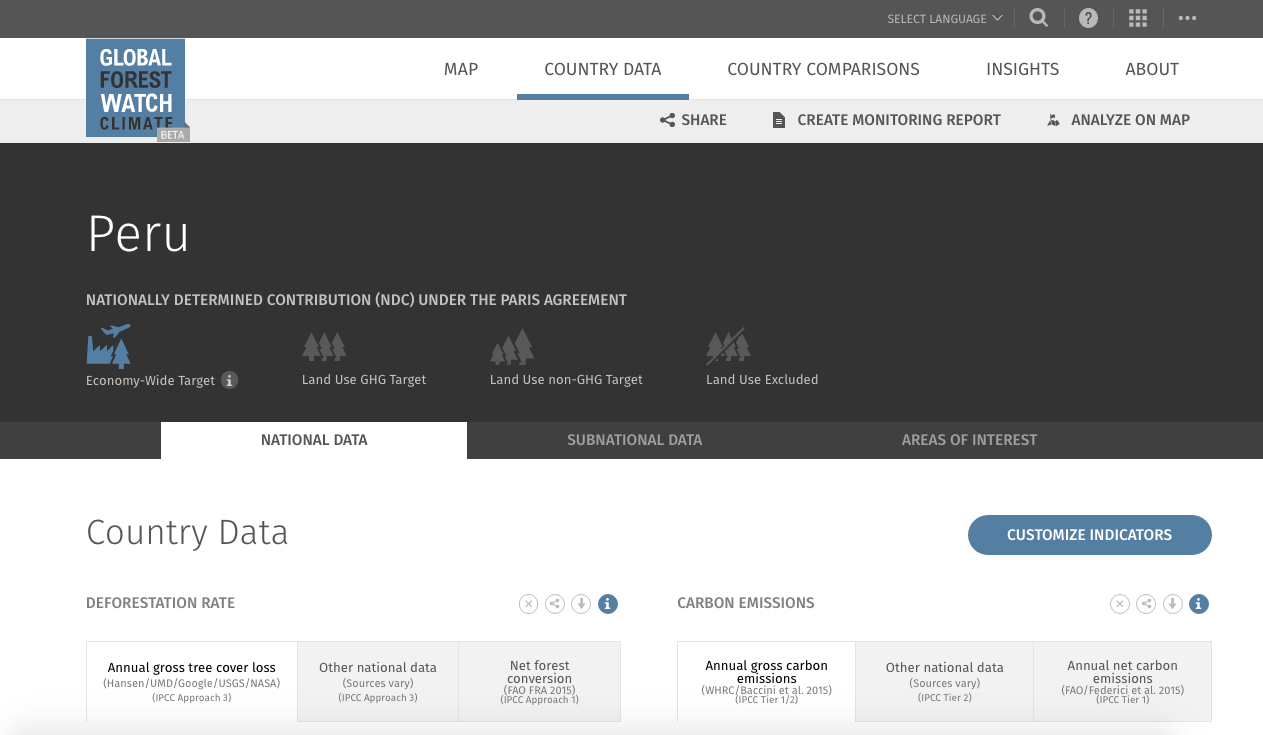 Country NDCs now available at the top of each country page, just below the country name.

International forest commitments have been chronically hampered by a lack of robust data to define targets, set baselines and monitor progress. Without credible and reliable measurement tools, it is nearly impossible to hold countries accountable for their goals. GFW Climate aims to fill this data gap and improve the way the international community defines success and measures progress toward forest conservation goals, one feature at a time.