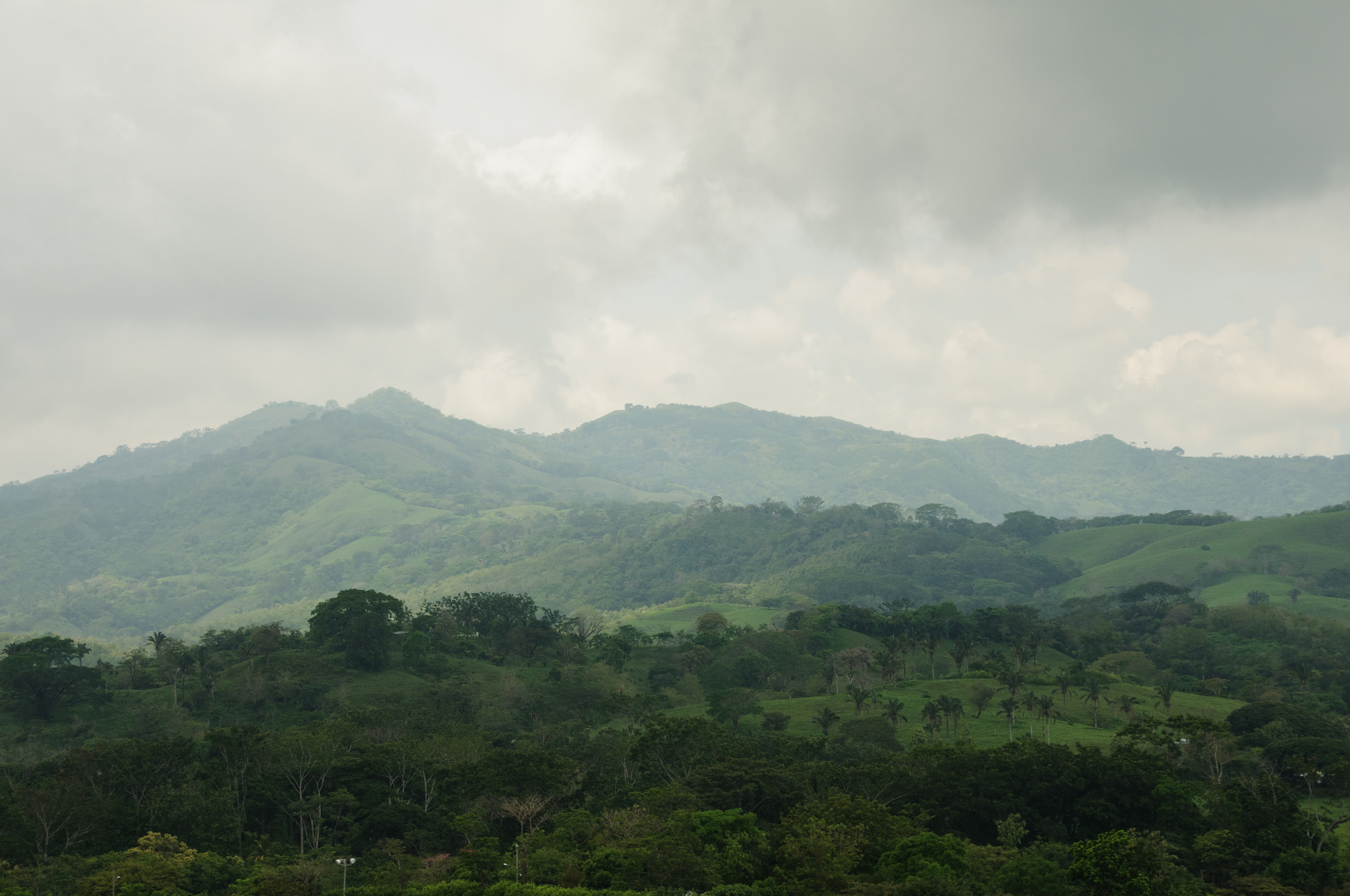 Cantonal Hojancha was once a major cattle ranching region. Most of this area was cleared for pasture only 30 years ago. Now, many of the residents have moved into the service industry, and the pasture land has slowly converted back to forest. Photo by Aaron Minnick (World Resources Institute)

New analysis from The Nature Conservancy, WRI and others estimates that stopping deforestation, restoring forests and improving forestry practices could cost-effectively remove 7 billion metric tons of carbon dioxide annually, or as much as eliminating 1.5 billion cars—more than all of the cars in the world today! In fact, forests are key to at least six of the study’s 20 “natural climate solutions,” which could collectively reduce 11.3 billion metric tons of greenhouse gas emissions per year. That’s as much as halting global oil consumption, and would get us one-third of the way toward limiting global warming to 2 degrees C (3.6 degrees F) above pre-industrial levels — the threshold for avoiding catastrophic effects of climate change — by 2030.

Avoided deforestation could deliver more than 40 percent of total emissions reductions offered by low-cost solutions. (Low-cost as defined in the study means it would take less than $100 a year to reduce a ton of carbon dioxide emissions.) Protecting forests also offers the greatest potential to mitigate climate change based on land area. Brazil and Indonesia together contribute more than 50 percent of carbon emissions from tree cover loss across the tropics, and thus offer the greatest mitigation opportunity for avoided deforestation. 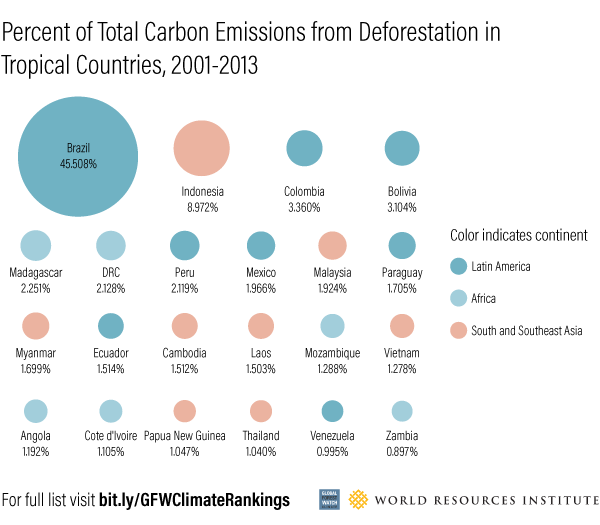 Despite these setbacks, the international Paris Agreement’s REDD+ (Reducing Emissions from Deforestation and Forest Degradation) policy and the inclusion of the land sector in 83 percent of tropical countries’ emissions-reduction plans (known as “nationally determined contributions,” or NDCs) mean these trends could be reversed. For example, strengthening and expanding Indonesia’s Forest Moratorium could help the country avoid 427 million metric tons of deforestation-related emissions by 2030. If all countries achieve their NDCs for land use change by 2030, the world’s forests could collectively store more greenhouse gases than Russia emits today.

While forest-related climate solutions are critical, they must be balanced with the need for greater food production as populations and incomes rise. Like avoided deforestation, reforestation also offers large climate mitigation potential, particularly in the longer term. 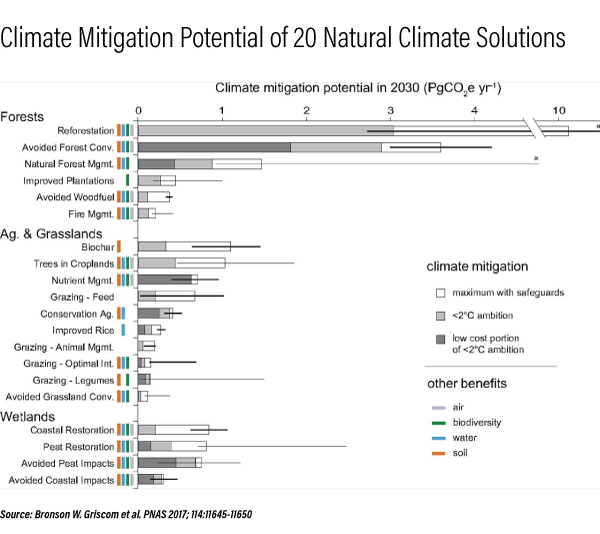 According to the study, 42 percent of the total emissions reductions that could be achieved from reforestation depend on reducing pasture land, including by reforesting all grazing land in forested ecoregions. This scenario may be difficult to fully realize given the growing demand for food, including a projected 95 percent increase in beef demand between 2006 and 2050. Instead, we will need to find ways to increase productivity on pasture lands to concentrate food production on a smaller amount of land and free up land for restoration.

Brazil, for example, aims to restore 22 million hectares (54 million acres) of land by 2030, including boosting productivity on 5 million hectares (12 million acres) of degraded pasture land by 2020. Restoration provides a good compromise. Forest-based products from restored forests—such as nuts, fruits and wild game—promote food security, while the trees absorb carbon dioxide. And research supports the business case for investing in restoration.

We can also reduce demand for pasture land by shifting our diets and reducing food loss and waste. Cutting our meat and dairy consumption in half could nearly halve our dietary carbon footprint, and if whole populations shifted their diets away from beef, it could free up nearly 300 million hectares of grazing land—an area nearly the size of India—and reduce agricultural pressure on forests.

Similarly, reducing food loss and waste could free up hundreds of millions of hectares of pasture land. Costa Rica has proven that this approach works. In the 1980s, Costa Rica removed subsidies for the cattle industry, which, along with falling international beef prices, made it less profitable to ranch marginal lands. The nation’s cattle herd dropped by one-third and pressure on grazing lands decreased. Meanwhile, Costa Rica’s economy began to focus more on urban areas and tourism. Forest cover increased from 41 percent in the 1980s to 48 percent in 2005.

Peat and Wetlands Are a Good Starting Place

One of the most effective areas for avoiding emissions from forest and land conversion is protecting and restoring peatland. Wetlands are the most carbon-rich type of land and offer 14 percent of the low-cost natural climate solutions available — the biggest benefit over the smallest land area.

WRI estimates that each hectare of tropical peat drained for plantation development emits an average of 55 metric tons (more than 60 U.S. tons) of carbon dioxide every year, roughly equivalent to burning more than 6,000 gallons of gasoline. Indonesia has some of the highest potential for mitigation benefits from peatland restoration and avoided conversion. Protecting wetlands also boosts climate resilience. Mangroves protect coastlines from storm surges and sea level rise, and wetlands provide flood prevention amidst the extreme rainfall expected to increase with a warming climate.

More research organizations are campaigning to increase awareness and implementation of natural climate strategies. A broader movement including government, private sector and civil society stakeholders could deploy solutions faster and on a larger scale.