Stripped earth at an Arco Minero gold mine in Venezuela. Photo by Vilisa Morón-Zambrano.

Mining in the Amazon is a pervasive threat to the world’s largest rainforest— and it’s on the rise. Gold prices spiked last summer and have remained high. COVID-19-related stimulus packages supported gold prices, and the economic threat posed by the pandemic turned investors towards the seemingly stable investment in gold. Demand for the metal has accelerated. And where demand has grown, deforestation and human rights abuses have followed.

Venezuela’s rainforests and people have been hit particularly hard by gold mining, where estimates indicate that between 80% and 90% is mined illegally.

Gold mining replaces oil industry, with the potential to be just as destructive

Venezuela has been historically dependent on extractive industries; until recently, the country’s economy was built on government-controlled petroleum extraction. After the oil industry collapsed due to crumbling infrastructure, the government was looking for a way to bolster the economy and gold offered a potential salve.

In 2016, the President of Venezuela, Nicolás Maduro, announced plans for the Arco Minero, which designates 112,000 square kilometers of rainforest south of the Orinoco River for mining gold and coltan (a mineral used in many electronics).

The plan for the Arco Minero explicitly contradicts environmental standards laid out in the country’s constitution. Many of the mines are run by Venezuelan gangs or guerilla groups from Colombia under protection from the Venezuelan military, creating a landscape of lawlessness.

Illegal goldmining had been occurring south of the Orinoco since before the Arco Minero, but never on such a massive scale. Cesar Romero, a metallurgical engineer, director of Fundacion Cerlas and co-founder of “Plataforma contra el Arco Minero”— an activist organization that opposes the mining— recalls his shock at just how much territory had been approved for mining.

“When I read the decree, I couldn’t believe the dimension. The activity was bad before, but the Arco Minero made it huge,” said Romero. “The area established by the decree is more than 12% of the national territory, bigger than Cuba and some European countries.”

An arc of destruction eating into the rainforest

Since the declaration in 2016, mining has proliferated, transforming Bolivar and Amazonas state where most of the activity is concentrated.

Vilisa Morón-Zambrano, President of the Sociedad Venezolana de Ecologica (SVE) which has been investigating the ecological impacts of the Arco Minero since 2016, has traveled to the region several times and remarked how quickly things have changed.

“In 2014 I was there for tourism, and the mining was not evident. But last February, once you pass some of the main towns and find the road to Brazil, it’s shocking, it’s all over,” Morón-Zambrano said. “You’d see people with craft equipment for mining walking around, and you could also see extraction plant sites in plain sight.”

Global Forest Watch (GFW) data shows a spike in primary forest loss in Venezuela in 2016, and loss in subsequent years has yet to return to pre-2016 levels. 74% of loss since 2016 occurred in Amazonas and Bolívar state.

The destruction can be seen from space. Satellite imagery of Las Claritas, a mining town in Bolívar state, shows tan scars sprawling out into the otherwise dense forest. Since 2016, Bolivar has lost 74,600 hectares of primary forest. Amazonas has lost 76,850 hectares, which is almost 1.5 times the amount of loss from the prior 15 years combined. 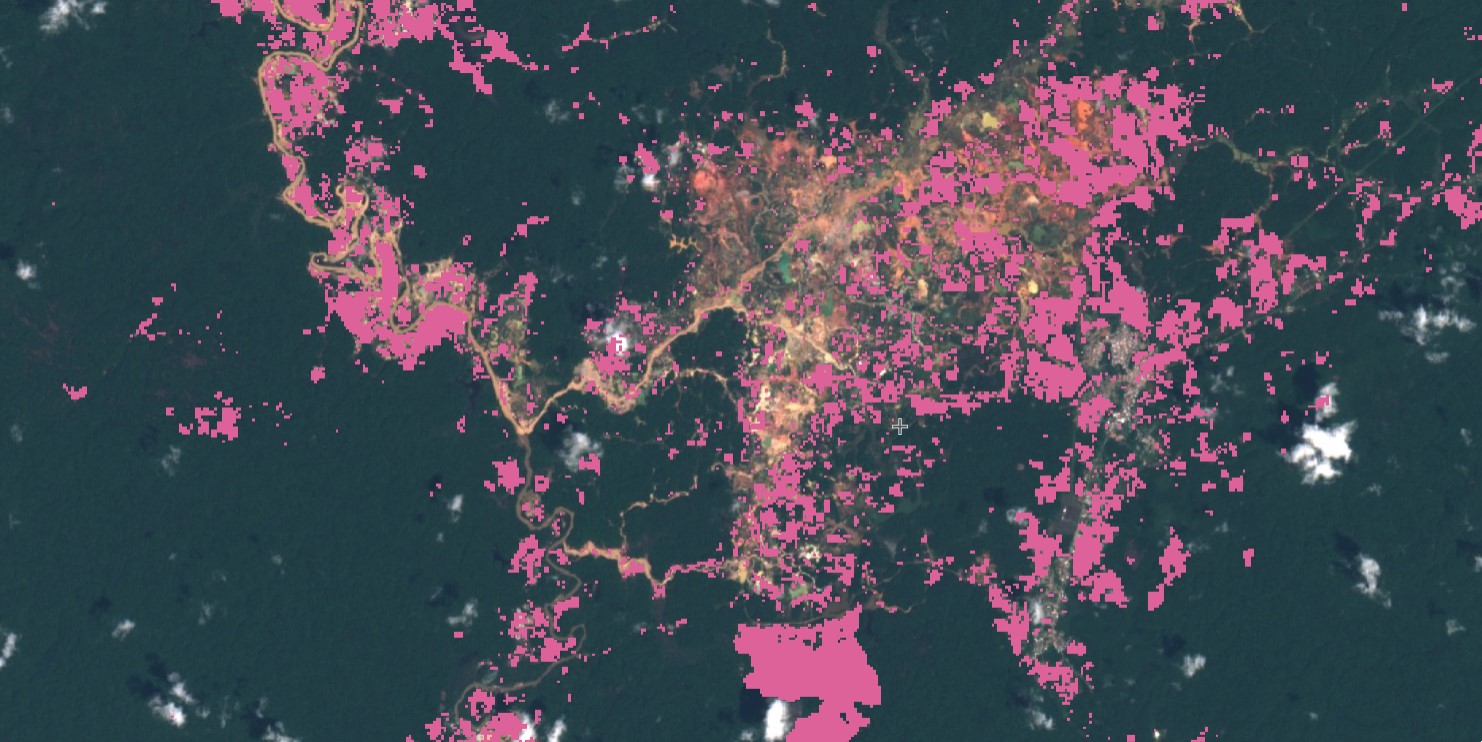 Venezuela’s forests are vital to the world’s natural heritage

Venezuela is considered one of the world’s “megadiverse” countries—17 countries that harbor the majority of the Earth’s species. Over 60% of the country is covered in natural forests that house threatened species like the jaguar and the giant anteater. The southern half of the country spans the Amazon and Orinoco river watersheds, as well as the dramatic landscape of stone pillars — called tepui— and the tallest waterfall in the world, Angel Falls. 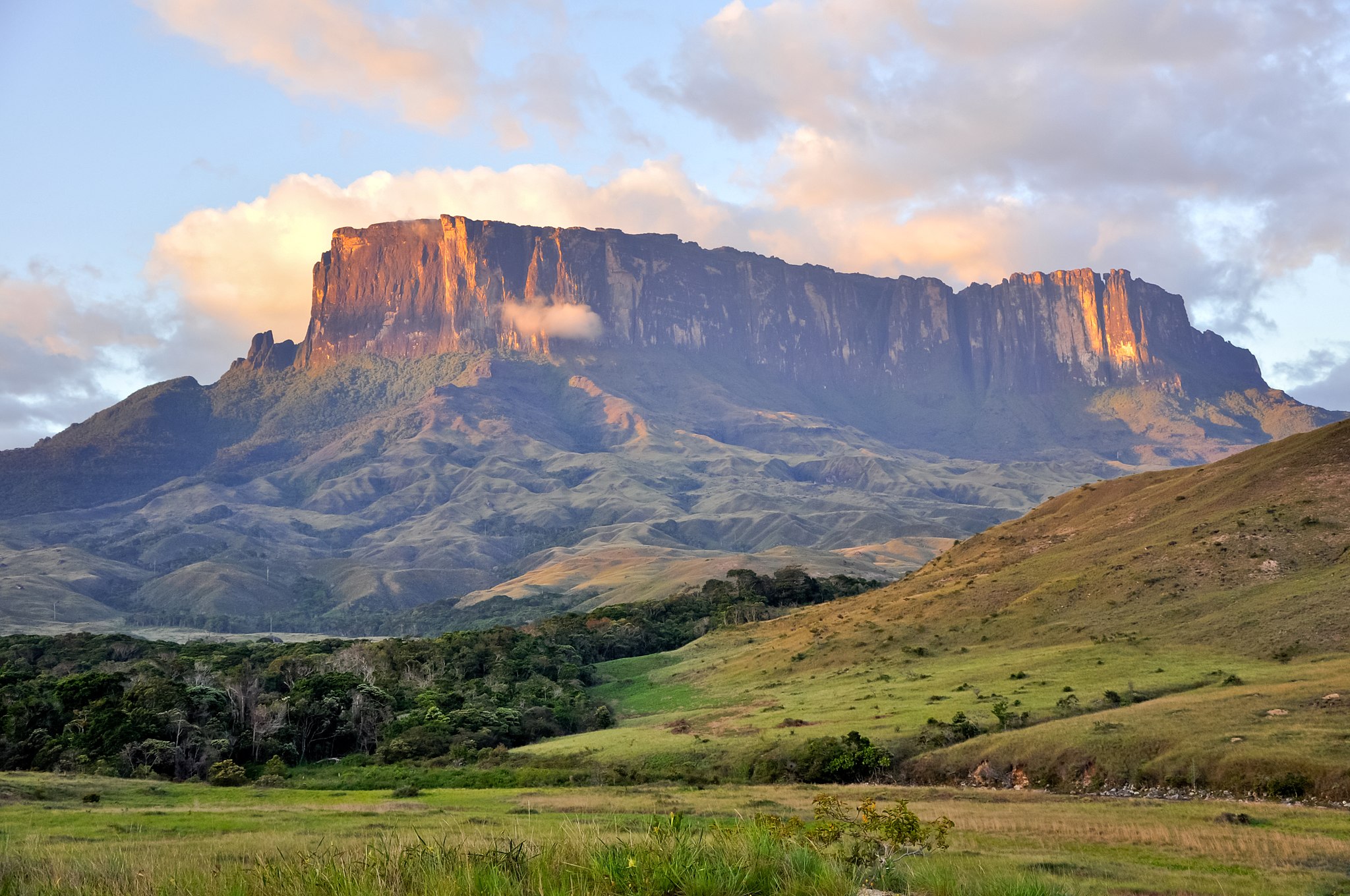 70% of Southern Venezuela is technically protected by 8 national parks, 2 biosphere reserves and 19 national monuments. But these designations present only a small deterrent against the advance of mining. Mining has spread like wildfire from the designated area of the Arco Minero to encroach on Canaima and Yapacana National Parks.

The gold mining process is highly destructive. It strips back trees and topsoil, causing erosion. Mercury, a toxic chemical used to amalgamate gold particles, can get carried for miles by rivers and accumulates in the bodies of fish and other organisms. The Orinoco River drains to the Atlantic where the pollution can impact fisheries in Caribbean nations.

The surge of unregulated mining activity has carried with it a flood of human rights abuses. Mining towns are rife with drugs, prostitution, violence and illness. Deaths often result from unsafe working conditions in the mines.

Venezuela’s Indigenous population has been disproportionately affected. The largest concentration of Indigenous peoples in Venezuela live south of the Orinoco and they have been given little to no say in the development of their region. Vladimir Aguilar, professor of political science at the University of Los Andes works with Indigenous towns and communities to help them define the borders of their territory and defend their land rights. He estimates that roughly half of Indigenous communities in Venezuela have felt either direct or indirect impacts from the mines.

Communities like the Pemon, Yanomamis and Ye’kuanas have either had to leave their ancestral lands as they are invaded by miners and armed groups, or work in the mines for survival, facing the threat of violence from armed groups and escalating costs of living. This major disruption to their traditional ways of life has strangled Indigenous culture and Aguilar worries that, once gone, it will be irreplaceable.

“The horrible part is that once you lose a culture, you lose part of humanity. In Venezuela, it was always the summation of cultures, including Indigenous cultures, so we are losing a part of our national identity. Once you lose that, it’s gone forever,” Aguilar said.

The impacts are also spreading beyond Venezuela’s borders. Mining towns often have increased rates of malaria and other diseases. According to Romero, as people have fled the conditions in Venezuela, those diseases follow, creating a regional public health issue.

“Now there are cases of malaria, diphtheria, AIDS…” Romero said. “6 million people are estimated to have left Venezuela, mostly to bordering countries, walking through roads and mountains and later affecting all those neighboring countries with these diseases.”

Halting the damage will require national and international system change

In order to see real change in the region, Morón-Zambrano says that the government regime needs to change. But the international community can take some actions to mitigate the impact. A gold market that sources gold responsibly, recycling electronics, tighter controls on the sale of mercury and responsible purchases on the part of the consumer, she said, could all help reduce the pressure on Venezuela’s people and forests. Wider awareness of the scope of the issue could also help drive action.

But Morón-Zambrano also sees hope in the people working to change the situation from the inside.

“What impacted me most was that there were people that wanted to do things differently, despite all the huge challenges. People who are organizing to plan and revert the damage happening today, people with big ideas,” Morón-Zambrano said.

Aguilar said that, despite the grim situation, the people south of the Orinoco are resilient.

“They have hope, that’s part of their culture,” Aguilar said. “There was a German philosopher that said, ‘destiny is not what happened, but where we’re going’. We’re going with strength and hope.”