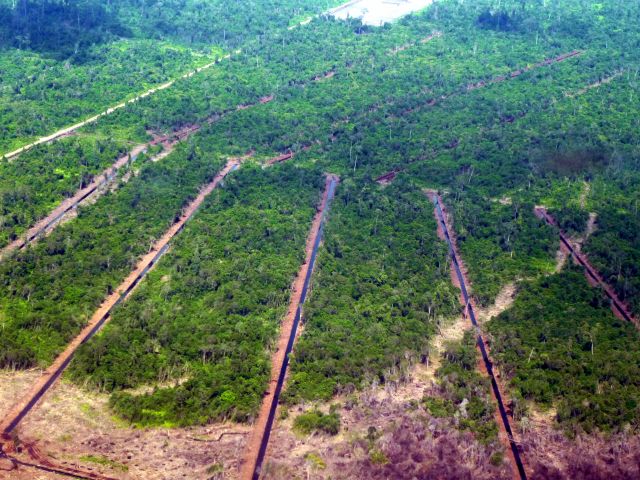 By Rachael Petersen, Samantha Gibbes and Mikaela Weisse Sarawak, a Malaysian state on the historically richly forested island of Borneo suffers from high rates of deforestation, but understanding this dynamic is made difficult by government secrecy and lack of transparency. Official maps of logging, oil palm and wood fiber concessions for Sarawak are hard to come by; the government does not publish this data in a publicly usable format. It is not surprising that Sarawak wanted to keep this information opaque. According to new maps of industrial logging, oil palm, and planted forest concessions complied and published by Global Forest Watch, these concessions cover over half the state of Sarawak, often overlapping with sensitive intact forests that are being exploited and degraded at one of the highest rates in the world. The new data launched by GFW offers the first detailed look at the extent of industrial concessions in Sarawak. These maps show the presence and extent of industrial forest timber licenses, oil palm concessions and license planted forests (LPF). This data was assembled from official documents in the public domain, including two State Forestry Department (SFD) 2010 maps, and supplemented with information from Environmental Impact Assessments (EIAs). While the resulting datasets are likely incomplete, they represent the most comprehensive and interactive picture of the distribution of concessions across Sarawak to date. (WRI invited the Sarawak State Forest Department to share information for inclusion on Global Forest Watch, but they did not respond). When combined with other data on Global Forest Watch, the impacts of logging and other land uses on forests can be monitored with more consistency and precision than ever before. Powerful remote sensing data, combined with the boundaries of concessions, sheds light on where forests are being cleared or degraded, how quickly and by whom.

These new maps reveal that timber license concessions alone cover a total of 6,542,852 hectares (nearly 16 million acres), over half (53 percent) of Sarawak’s total land area. The logging concessions are concentrated toward inland Borneo, on the border with Indonesian Kalimantan, home to some of the densest and most biodiverse remaining forests on the island. However, as previous research confirms, this area has been “impacted by selective logging, fire and conversion to plantations at unprecedented scales since industrial-scale extractive industries began in the early 1970s.” The data also reveals where logging concessions overlap with the last remaining ntact Forest Landscapes (IFLs) in the country. Although Sarawak has very few remaining IFLs compared to neighboring Indonesia, Malaysia has one of the highest rates of IFL degradation in the world in both area and percentage. These new maps confirm that logging is in part responsible for the degradation of these landscapes in Sarawak between 2000 and 2013.

For example, the Shin Yang T/3342 logging concession, located on the border with Kalimantan, covers around 200,000 hectares (nearly 500,000 acres) of forest, much of which was considered intact as of 2000. But logging activity within this concession boundary fragmented and degraded one of the few remaining IFLs in Sarawak. Since 2000, almost 40,000 hectares (nearly 100,000 acres) of trees have been cleared within this concession, over 70 percent of which occurred within an IFL.

According to our analysis, only 26 percent of land with tree cover in Sarawak remains outside industrial concessions and protected areas. While reforms have been promised, much of the damage is already done: Sarawak is running out of forests. The new data show just how urgent it has become for the government of Sarawak to preserve what is left. The international business community must also play a role by sourcing only truly sustainable timber and looking with caution at logs and oil palm flowing from the highly deforested areas of Sarawak. This is relevant to all consumers. Take alook at GFW today to learn more about the link between commodities and deforestation and what you can do. Explore Sarawak logging, oil palm and planted forest concessions on Global Forest Watch or learn more about the history of forest exploitation in Sarawak in our blog 25 Years of So-Called “Sustainable Forest Management” in Sarawak.