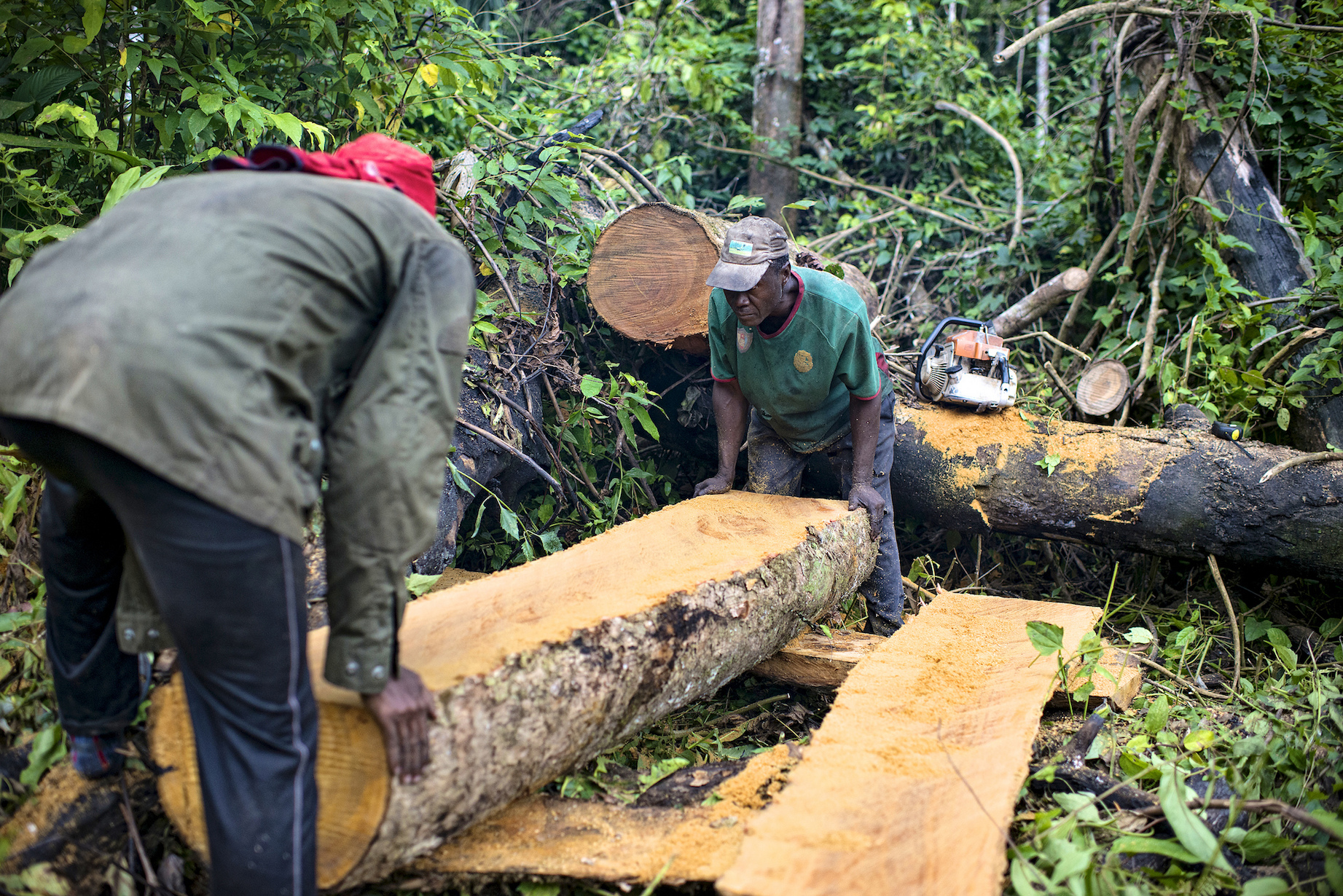 By Bo Li and Yaxin Yan China’s investments in Africa have exploded in recent years, with outward foreign direct investment (OFDI) stock growing from $1 billion in 2004 to more than $30 billion in 2014. Investment in forests—particularly the timber sector—is no different. China’s overseas forest project investments grew from eight in 2007 to 84 in July of 2015. Today, Chinese forest investment can be found in 25 African countries. Yet in many cases this expanded investment has come at a cost to people and the planet. Five trends shine a light on the impact Chinese investments have had on Africa’s forests, and point to how both governments and companies should proceed in the future.

In the face of a growing demand for timber and tighter domestic forest protection laws, China has become the world’s largest importer and processor of logs, and a lot of them come from Africa. Around 75 percent of African timber exports are sent to China every year, according to the International Institute for Environment and Development (IIED).

2.     Investments have mixed impacts on local communities and environment.

The impact of Chinese forest-related investment in Africa varies significantly. On the one hand, Chinese forest investment can improve market access and increase income sources for local, small-scale operators in countries such as Zambia. On the other, IIED and Forest Trends reports find negative impacts like low contribution to local employment, inferior labor practices, deforestation, and involvement in illegal logging and timber trade. These impacts also pose reputational risks for China’s government and companies in Africa. 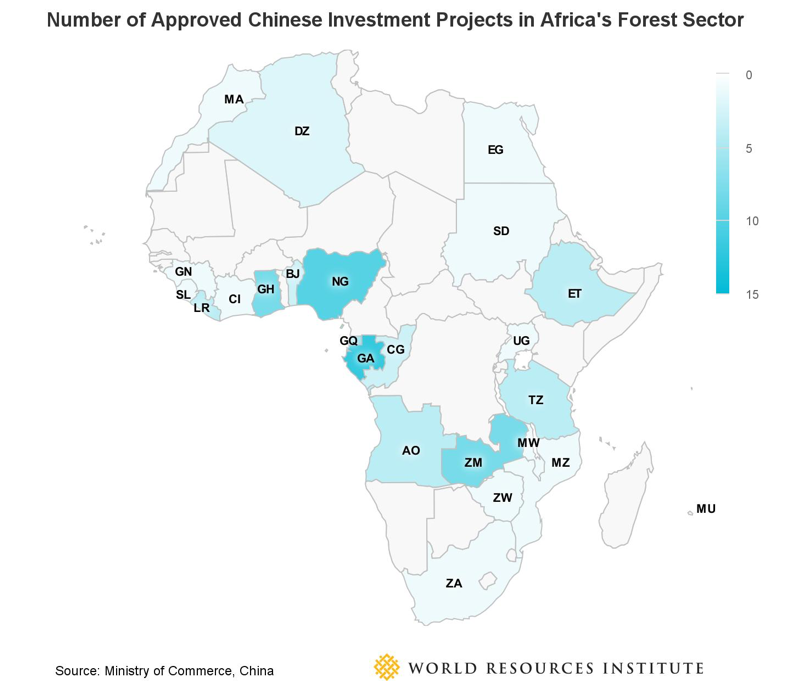 3.     Investment is mainly coming from harder-to-regulate small and medium enterprises.

While large, state-owned enterprises (SOEs) are traditionally the main players in China’s overseas investment, privately owned small and medium enterprises (SMEs) are playing a larger role in the African forest sector. More than 80 percent of the Chinese companies that have invested in the African forest sector since 2007 have less than $10 million in registered capital. Several of these SMEs have reported that they do not receive any government funding or even loans from Chinese commercial banks, unlike larger companies, which typically obtain 80 to 90 percent of their funding from Chinese commercial and policy banks. 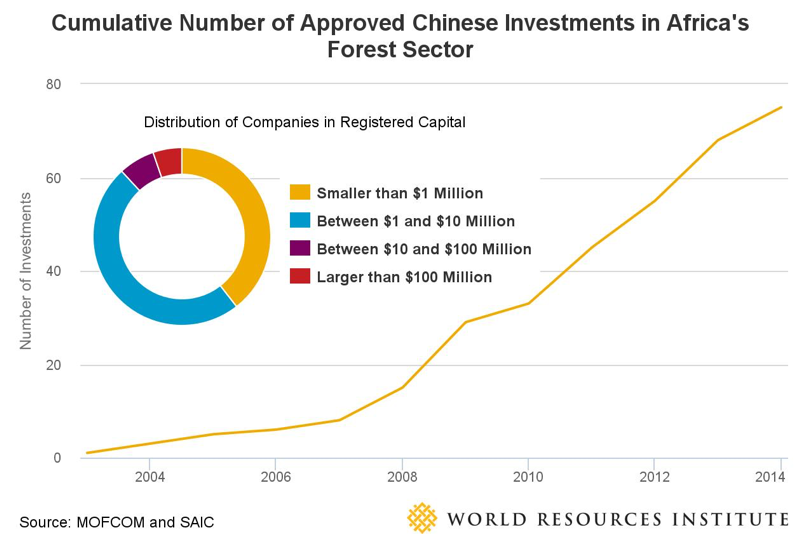 Due to their limited financial ties with the Chinese government and banks, SMEs are less likely to comply with the country’s voluntary guidelines for social and environmental safeguards for overseas investment. For example, the Environmental Investigation Agency (EIA) found one Chinese company engaged in illegal log export in Mozambique just one month after its representatives attended a guideline training.

4.     Investments are moving upstream in the timber supply chain.

Instead of directly acquiring forest concessions, many Chinese companies began as trading companies that purchased timber from local concessions and forest operators. Now, however, an IIED study finds that several Chinese companies in Gabon and Mozambique have moved upstream, acquiring forest land concessions and setting up local factories to directly engage in timber harvesting. More direct access to forests allows Chinese investments to play a bigger role in sustainable forest management in Africa.

In order to increase the added value of forest exports and create more employment benefits for local people, a number of African countries, including Cameroon, Mozambique and Gabon, have introduced national bans or restrictions on the export of unprocessed logs in recent years. In practice, however, weak forest governance within these countries has rendered such bans ineffective. Data from the United Nations Comtrade Database indicates that China is still importing a significant amount of logs from major African countries, despite log export bans (see the case of Mozambique below). In other cases, Chinese companies shift their supply chains to different countries to continue sourcing logs. While Chinese log imports from Gabon have dropped significantly after the country enacted its log export ban in 2010, China has begun to import more logs from other countries including the Democratic Republic of Congo and Cameroon.

The rapid growth of Chinese investment in African forests has significant implications for forest management—and the trends are going in the wrong direction. It’s up to governments and companies in both China and Africa to create more sustainable investment pathways. The Chinese government could establish laws and regulations to make sure the country is importing legally and sustainably sourced timber. Chinese companies could adopt more rigorous social and environmental safeguards for their overseas investments. And in Africa, governments could strengthen forest governance and law enforcement to make sure all forest managers operating in their countries are properly managing ecosystems for the good of the planet, people and the economy.