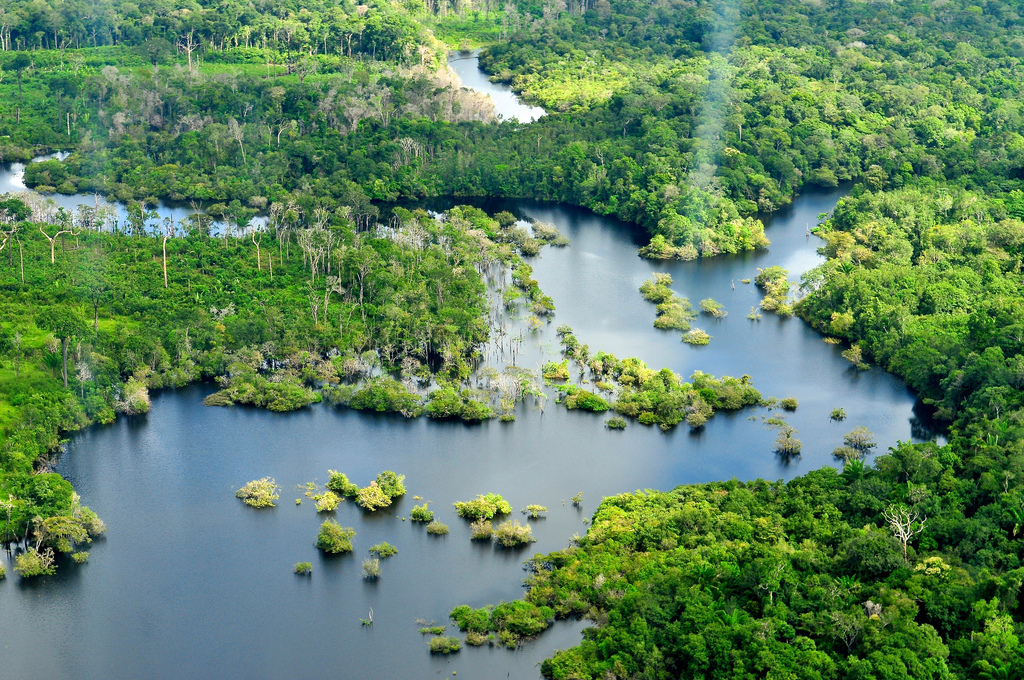 Linking products to places: the initiatives working to end deforestation

Aerial view of the Amazon Rainforest, near Manaus, the capital of the Brazilian state of Amazonas, Brazil. Photo by Neil Palmer/CIAT for Center for International Forestry Research (CIFOR). (Flickr).

Why do we let history repeat itself? Less than six months ago, fires raged in Indonesia, blanketing the region in toxic smoke and releasing more greenhouse gas emissions than Germany produces in a year. Eventually the fires subsided, the air cleared, and the world stopped talking about this crisis. But it will happen again. These fires, caused by unsustainable forest management and agricultural practices, are a devastating and costly cycle that we have been repeating for decades. Fortunately, a group of business, government and civil society leaders sat down last week to find solutions. The Tropical Forest Alliance (TFA 2020) is a global partnership seeking to end deforestation caused by the production of commodities such as palm oil, soy, beef, and pulp and paper. It’s a daunting challenge, but the companies in the room seemed more committed and motivated than ever. Clearing forests to make way for agriculture accounts for an estimated 80% of global deforestation. Meanwhile, public scrutiny of deforestation is on the rise. Companies, especially those with consumer-facing brands, have become increasingly concerned about reputational, operational and legal risks posed by deforestation. These companies are now seeking to root deforestation out of their supply chains.

Get to the source

Unfortunately, linking a bar of soap to a palm oil plantation in Indonesia is like trying to find the original owner of a dollar bill in your wallet. How many times has that dollar changed hands before it found its way to you? This is the problem of “traceability.” Some TFA 2020 member companies like Unilever, Cargill and Mondelēz are making great strides towards traceability with certain commodities like palm oil, by engaging closely with their suppliers. Connecting the dots between thousands of global suppliers is a challenging process, and remains a major industry-wide hurdle. We urgently need innovative solutions to overcome the traceability problem. A new initiative by the Global Canopy Programme and Stockholm Environment Institute will draw on huge sets of largely untapped production, trade, and customs data to shed new light on how commodities flow through the global trade system. This new online platform, scheduled for launch later this year, will not replace companies’ own traceability efforts but could provide a useful proxy in near-term.

Keep an eye in the sky (and on the ground)

Once we can link a product to a place, we can understand how that product might be associated with deforestation or even human rights abuses. High-tech monitoring systems like Global Forest Watch are now using satellites to detect tree cover loss in near real time. When combined with additional maps and information sourced (or crowdsourced) from the ground, these systems allow us to pinpoint the when, where and why of deforestation with precision. For example, last year Global Forest Watch detected a massive new clearing (more than 2,000 hectares or 5,000 acres) of pristine rainforest in the Peruvian Amazon. Field investigations by a local NGO confirmed the deforestation was to make way for a massive plantation, owned by a UK-based company called United Cacao. This increased visibility into the supply chain allows chocolate manufacturers to make better informed decisions about who they want to work with and buy cocoa from. And it enables companies to get involved where forest areas are at risk within their supply chains – for instance, by training smallholder cocoa farmers on sustainable agricultural practices, increasing the yield of their farms and reducing the risk of expansion into forests.

Satellite and computer technology are transforming human understanding of the world. This transparency revolution will help companies reduce their exposure to deforestation and related environmental and social risks. It will also help consumers hold these companies accountable. Unfortunately, there is still much we cannot see and do not know about forest landscapes and global commodity supply chains. Technology advancements will continue to expand our knowledge, but we also need companies and governments to share the information they already have. Global Forest Watch recently aggregated and anonymised data from several companies to publish the first public-facing global database of palm oil mill locations. When overlaid with GFW’s near real time monitoring systems and other relevant maps, this database will allow companies to identify and develop mitigation plans for mills with the highest deforestation risk. Businesses seeking to address the legal, operational and reputational risks caused by deforestation in their supply chains should take action now. Joining the TFA2020 and Global Forest Watch partnerships is a good first step. And anyone interested in these issues can monitor progress online and subscribe for alerts using the free platform.

This post originally appeared in The Guardian. BANNER PHOTO: Aerial view of the Amazon Rainforest, near Manaus, the capital of the Brazilian state of Amazonas, Brazil. Photo by Neil Palmer/CIAT for Center for International Forestry Research (CIFOR) (Flickr).