Blog home/Data and Research/A one true map, not a ‘no-one’s map’
Search the GFW Blog 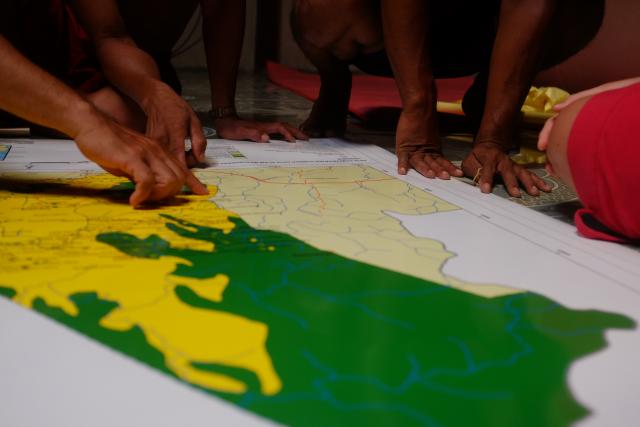 If we look back and think about why fires are such a regular occurrence in Indonesia, we should know that the problem lies in how we manage our forests and lands. Weak forest and land governance is often influenced by inaccurate, incomplete and outdated reference maps, causing issues such as slow spatial planning process, the overlapping of concessions and licenses, as well as growing conflicts involving local communities.

In response to this persisting issue, President Joko “Jokowi” Widodo, through Presidential Regulation No. 9/2016, issued a breakthrough initiative called the One Map policy to systematically and fundamentally reorganize Indonesia’s forest and land in an accountable manner. The One Map policy calls for a synchronization of thematic maps from various sectors, including land-based concession maps such as mining, plantation and forestry. The synchronization of maps is deemed effective to ensure that our natural resources are not overly exploited and are used in an accountable manner. Research by the Indonesia Corruption Watch (ICW) showed that state losses from missing potential non-tax revenue in forestry amounted to Rp 169.7 trillion (US$12.8 million) in 2004 to 2007 alone.

On top of economic losses, weak accountability in Indonesia’s land management has also led to forest and land fires, which have undermined people’s welfare, health and caused additional economic loss of Rp 220 trillion. Now, what does the synchronization entail? In the context of land-based concession maps, all concessions polygons were placed on top of the Geospatial Information Agency’s earth map, which serves as a reference map. All concession polygons that were overlapped were then examined to see if the overlapping was based on regulations (for instance, Presidential Regulation No. 28/2011, which allows close-pit mining to overlap with protected forests) or if the overlapping was due to negligence, such as when the licenses for oil palm concession inside the protected forest were issued as a result of maps with unclear forest boundaries.

The truth is, the synchronization of maps is not an easy job. In just one polygon of concessions, there could be various boundaries related problems involving stakeholders with different interests. For instance, one polygon could have an oil palm concession, claimed as an indigenous forest, laid in two districts with unclear administrative boundaries, and overlapped with mining concession areas and settlement of local communities who already own land certificates. With such complicated problems, how could we synchronize thousands of concessions maps to achieve a one true map — one that can be accepted and referred to by all stakeholders? The One Map policy could be a “no-one’s map” if synchronization is deemed less inclusive, wrong or unfair by the stakeholders involved.

The maps’ synchronization is not about mapping in a narrow definition, but rather a non-technical activity aiming for consensus over boundary issues in various polygons. Those boundaries include smallholder boundaries, private sectors concessions, indigenous forests, village administrative areas and forests boundaries (including national parks and nature reserves). The synchronization, hence, requires a conflict transformation scheme at the local level to bring together all key stakeholders to come to an agreement and to ensure that no conflict would emerge in the future. If this process is not done inclusively, the One Map policy could create or exacerbate existing conflicts on the ground.

For instance, if indigenous people or the local community were not involved in determining an area as nature reserves in which they have lived for generations, these people could be legally and economically marginalized, which could eventually lead to social conflicts. The One Map policy, at the local level, is hence a process to facilitate conflict transformation that goes beyond registering complaints and seeking agreement, but rather changing stakeholders’ relationship pattern in a structural manner. In this scheme, we need an inclusive and credible multi-stakeholder forum that can place all key stakeholders in a symmetrical position. This means that the government, smallholders, private sectors, indigenous people, law enforcement agencies, academics and other actors can communicate in a constructive manner, to listen to and empathize with different perspectives and build trust to solve boundaries issues collaboratively.

This spirit of collaboration is key to producing a one true map and will underpin the provision of a huge amount of resources needed to synchronize the map. The government must lead and facilitate the One Map policy with a strong, honest and transformative leadership. Community members, including smallholders, private sectors and civil society, should play an active role in the process with good intentions. The government’s agenda, such as agrarian reform and social forestry in the overall framework of the One Map policy, if carried out in accordance with the above principles, could be a solution for a fair and sustainable use of our natural resources. This is a key step to managing our forests and lands in an accountable manner, which eventually will help improve the quality of human life as reflected in Jokowi’s Nawacita list of nine programs.