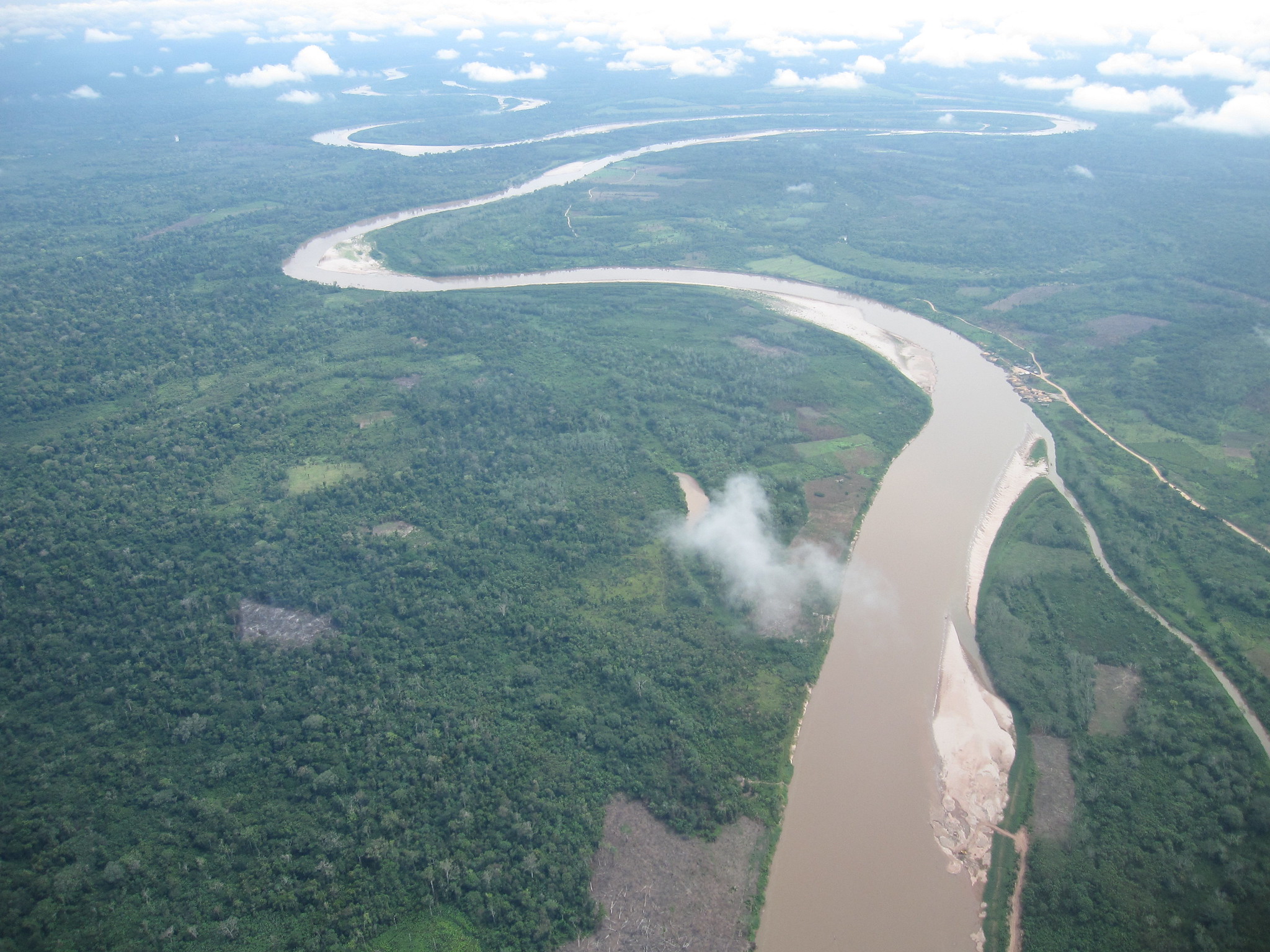 By
Liz Goldman
Posted on February 26, 2020
Subscribe to the
GFW newsletter

By
Liz Goldman
Posted on February 26, 2020
Subscribe to the
GFW newsletter

Plagued by for many years by wildlife poachers and deforestation, the northern tip of Chiquibul, Belize’s largest national park, became a hot spot of forest loss in 2019. In an age of climate destabilization and the largest mass extinction in 66 million years, primary forests like Chiquibul are strongholds of carbon storage and species habitat and therefore crucial to protect. But with millions of hectares of primary forest loss occurring around the world, knowing more specifically where we should be sounding the alarm can be a challenge.

How are emerging hot spots calculated? Emerging hot spots identify trends in when and where primary forests have been lost. Several tests are run to identify where statistically significant clusters of loss occurred each year. Fluctuations in the frequency and intensity of these clusters over time determine the location of different kinds of hot spots. Categories include new, intensifying, diminishing, persistent and sporadic— each of which indicates a specific trend in the data. The analysis is run for individual countries, and thus categorization of hot spots is relative to the primary forest loss patterns occurring in that individual country.

Forest loss “hot spots” can help with that. Global Forest Watch’s new hot spot analysis combines the timing and location of primary forest loss from the last 18 years to pinpoint areas where the intensity of loss is either improving, deteriorating or remaining consistent across time. Available for countries with humid tropical forests, these hot spots build on previously published analysis to home in on the most critical trends in forest loss.

New hot spots identify areas of primary forest loss that were only identified in the most recent year of data. These appear in most countries, often in previously relatively undisturbed areas. One such hot spot appeared in Nigeria in 2018, intersecting with Cross River National Park and the country’s only Intact Forest Landscape. The park is home to rare and endangered species like forest elephants, pangolins and 18 primate species (including the critically endangered Cross River gorilla).

New hot spots like this often represent the frontiers of primary forest loss, where human development is expanding. In Nigeria, a six-lane, 260-kilometer highway proposed in 2015 was initially slated to run directly through Cross River National Park. Although the route has been shifted from the heart of Cross River National Park to just outside its borders, initial clearing for this highway has already torn down forests as well as small rubber and cocoa plantations and farms that local communities rely on for their livelihoods. The most recent update of the data confirms that the new hot spot continued to expand into the heart of the Intact Forest Landscape and National Park in 2019. As construction of the highway and a recently approved port progresses, data updates and monitoring will confirm whether new hot spots continue to spread as the forest becomes more accessible and susceptible to additional losses.

New hot spots overlap with Nigeria’s only intact forest landscape and continue to expand into the biodiversity rich Cross River National Park in 2019.

Intensifying hot spots completely cover Intanki National Park, which lost 7% of its primary forest from 2002-2019. Reports indicate loss in this park is potentially linked to clearing for fuelwood and farmland by local tribes who have purchased or occupied land in the national park which they feel is part of their traditional heritage. Additionally, decreasing arable land and pressure from two national separatist insurgent groups living on the outskirts of the park as part of a ceasefire agreement have also contributed to intensifying loss. 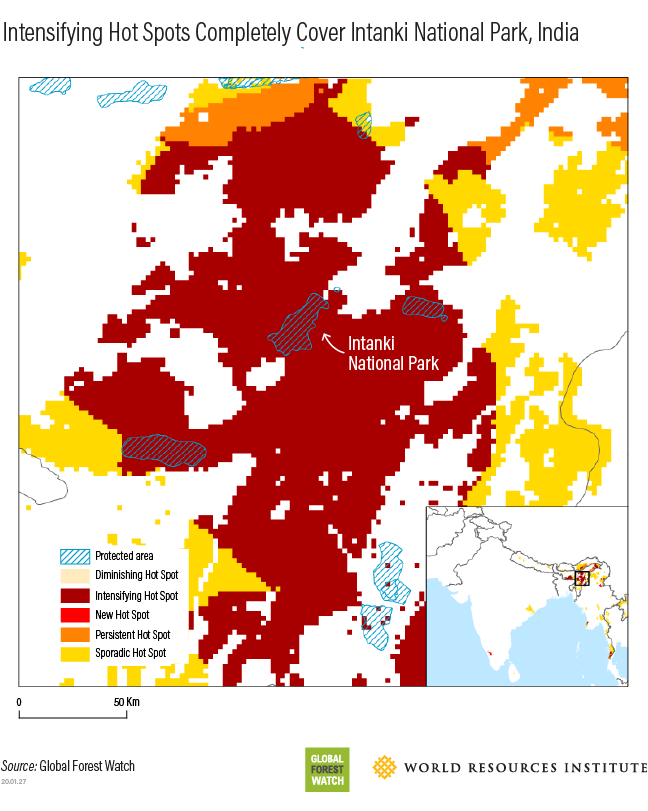 Peru’s only diminishing hot spot may be an indicator of success. The spot can be found just outside Cordillera Azul National Park, a biodiverse area that stretches over both the Amazon Basin and the Andes mountains. Cordillera Azul has been a REDD+ project site since 2013. The project aims to protect the area and benefit surrounding communities through environmental education, land-tenure assistance and socio-economic benefits. A diminishing hot spot is a positive sign that the project could be working and compared to the 2018 data, this diminishing hot spot area has expanded significantly. However, intensifying and new hot spots in other parts of the park may indicate that some of this loss has shifted to other landscapes.

Peru’s only diminishing hot spot can be seen outside and within the Cordillera Azul National Park in a REDD+ project area.

Persistent and sporadic hot spots: Patterns to keep an eye on

Persistent hot spots show areas where loss has been steady through time and isn’t necessarily getting better or worse. Persistent hot spots are frequently associated with long-term (17 or 18 years of loss) clearing for agriculture, which can be seen in Panama, Honduras and Southern Mexico.

The last hot spot category, sporadic hot spots, is the most common. This represents a shorter-term, “on again, off again” pattern. In Central Africa these sporadic spots are most often associated with shifting cultivation, a type of rotational agricultural practice where forests are cleared for crops, then left fallow for several years to regain nutrients in the soil before being cleared and planted again. This cyclical pattern can be seen in the Republic of Congo and Democratic Republic of the Congo, where sporadic hot spots overlap with areas of shifting cultivation. 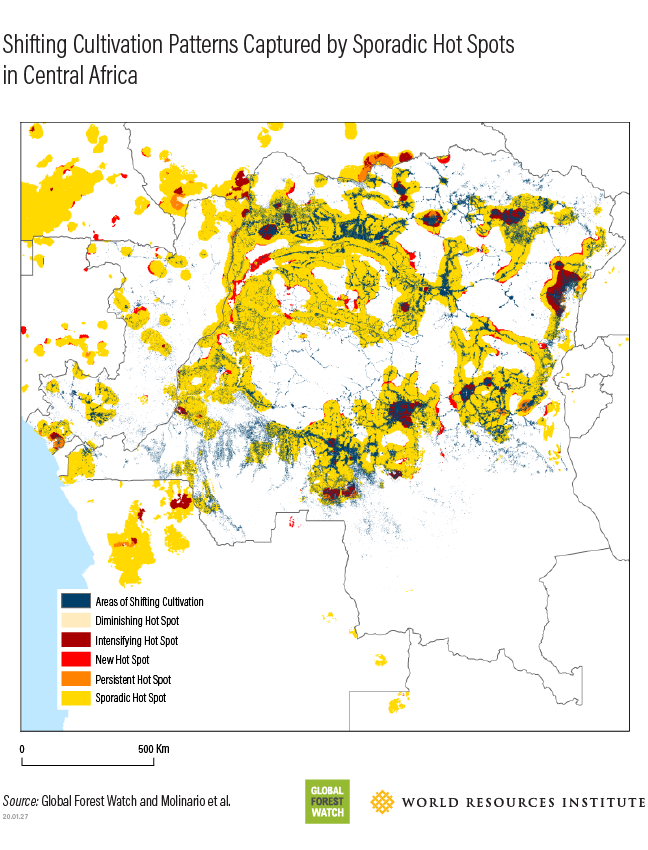 Identifying important trends within primary forest loss data grants us a more nuanced picture of what would otherwise be billions of pixels of data. New hot spots can help us draw attention to areas of recent disturbance, intensifying hot spots show us where long term loss is worsening and diminishing hot spots indicate where efforts may be proving effective. Continuing to monitor these hot spots over time, as they grow and shrink, will allow for quick identification of concerning loss and help governments and conservation organizations better prioritize their intervention efforts.