Blog home/Data and Research/Fires, Floods and Farming as Seen by Satellites
Search the GFW Blog 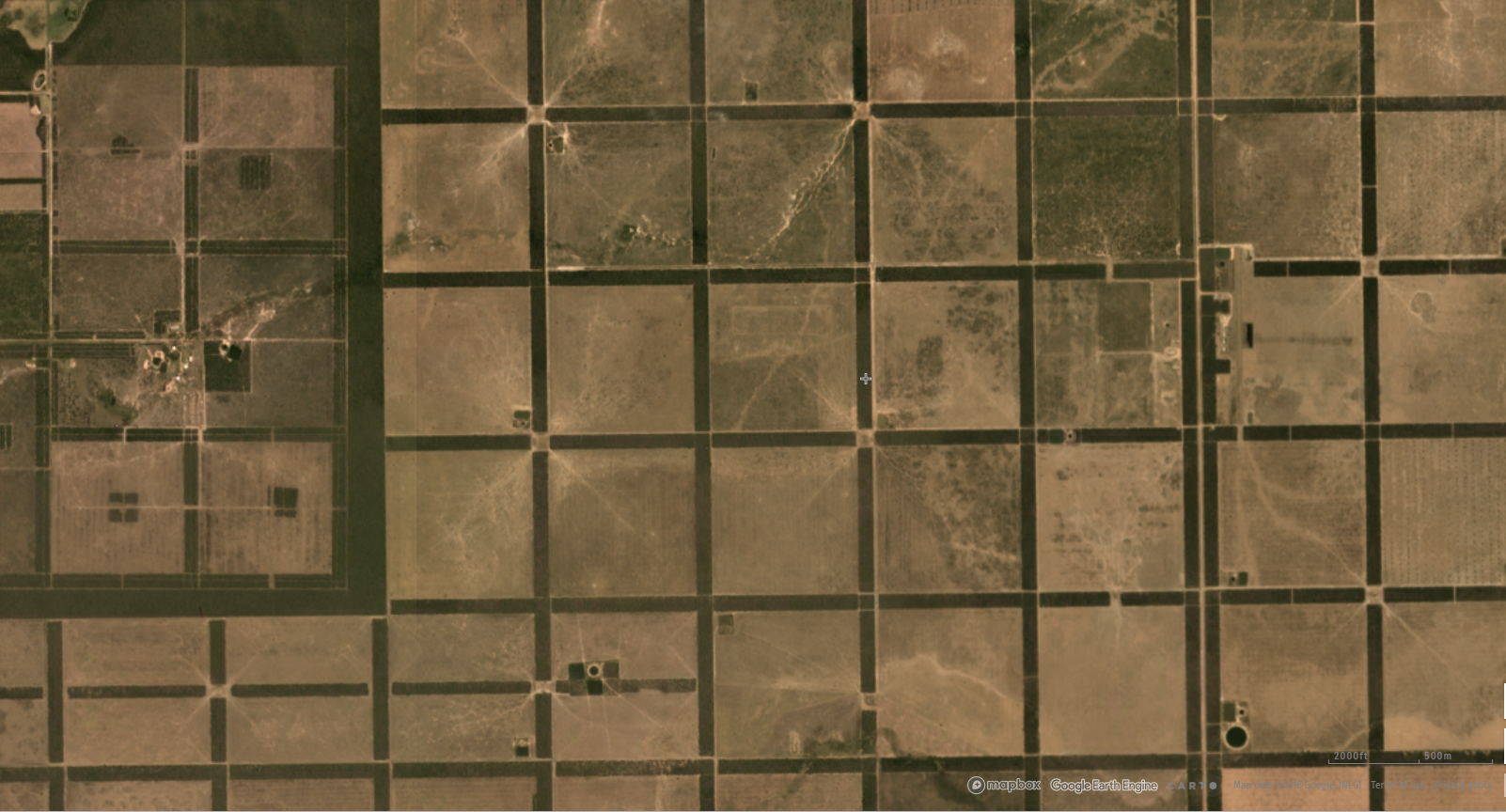 By
Sarah Ruiz
Posted on December 20, 2019
Subscribe to the
GFW newsletter

Fires, Floods and Farming as Seen by Satellites

By
Sarah Ruiz
Posted on December 20, 2019
Subscribe to the
GFW newsletter

Satellites, constantly orbiting around our planet, see just about everything. Which means that when a tree falls in a forest, satellites know about it. Global Forest Watch’s (GFW) tree cover loss data, derived from NASA satellite imagery, can pinpoint where trees have fallen around the world. To help us understand what might have caused this tree cover loss, we can turn directly to the images.

GFW displays recent satellite imagery from Landsat (30 meter resolution) and Sentinel-2 (10 meter resolution) as well as monthly basemaps derived from Planet imagery (five meter resolution). This imagery often shows distinct patterns that provide clues to what’s driving forest loss, and comparing the imagery across years and months can paint a picture of how the land has changed over time. Here is what some of the common causes of tree cover loss look like from space:

One of easiest patterns to spot is that of large-scale agricultural clearing. Mechanized agricultural operations will clear large rectangular swathes, clustered together with very thin strips of tree cover left to divide plots.

Different crops can also be detected by distinct characteristics present within these rectangular expanses. “Row crops” like soy or corn tend to show lines of planting—thin alternating strips of brown and light green.

Oil palm, and other tree crops show a different pattern. Mature oil palms look similar to healthy, natural forests from above, but may have obvious lines of trees or regular patterns or thin dirt roads separating the rectangular plots. Because it takes a few years for palms to reach their full height, it is also common to see some rectangles in tan earth or varying shades of green side by side, indicating recent clearing and young trees.

Artificial intelligence methods of distinguishing different types of trees in satellite imagery are being developed to make detecting plantations of oil palm even easier. GFW has worked with Orbital Insights to train an algorithm to recognize the presence of oil palm from the imagery. Additionally, the distinct star shape the palms form from above is visible using GFW’s satellite basemap, which provides extremely high-resolution imagery. Examining these shapes, alongside other indicators can be a quick way to distinguish palm plantations from natural forests. 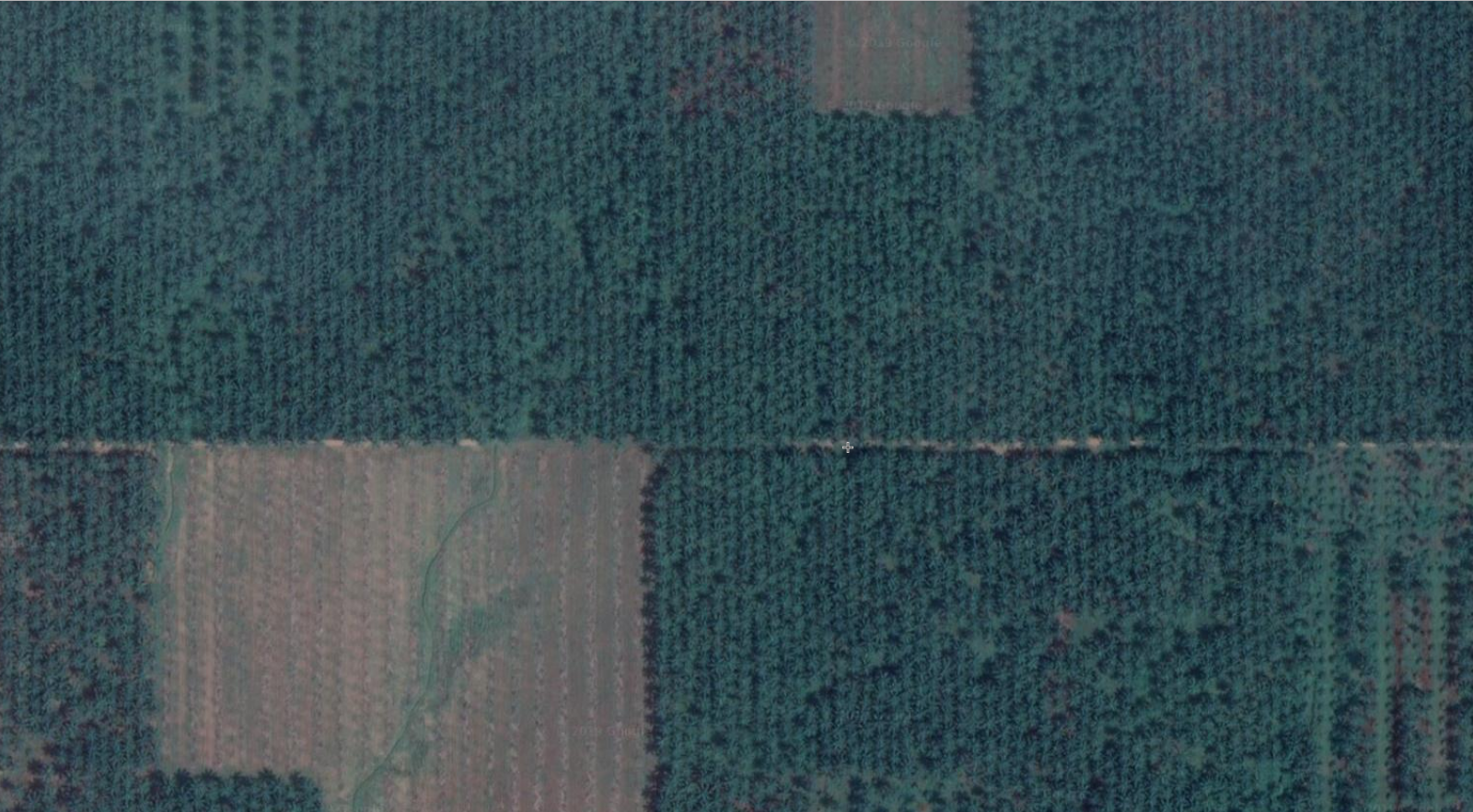 Cattle pasture can be difficult to distinguish from other land uses, as cattle grazing is often the initial default for cleared lands, so there is no single signature for grazing land in satellite imagery. But in regions where large-scale cattle operations are the primary industry, like the Paraguayan Chaco or parts of Brazil, pasture appears in well-defined geometric shapes with distinct edges. These clearings are often separated from roads by strips of remaining forest, stray shrubs dot old pasture and cattle trails can sometimes be seen crisscrossing the landscape.

Smaller forms of agriculture are much less geometric. Smallholder farms appear in a patchwork of brown and green, often spreading out from roads, rivers or more dense population centers. Cleared areas sometimes still retain a speckling of forest cover.

This community level cultivation can sometimes take unique forms in different regions. For example, in Bolivia, near the city of Santa Cruz de la Sierra, a unique radial pattern of clearing is visible. Communities have settled in the center of these starburst shapes and farm the wedges of land spreading out from the village. Often patches of forest are left standing to separate different communities’ lands.

In humid tropical forests, nearly all fires are human-caused, some set illegally and others the result of flames escaping from nearby cultivated lands where fire is used as a tool to prepare the land for planting. Fire can be one of the more difficult patterns to identify in the imagery. Edges of the burning are often indistinct and ragged, and smoke from larger fires sometimes obscures the satellites’ view for weeks.

But once the smoke has cleared, burn scars can be identified by their organic shapes, often spreading out from areas of human activity. Recently burned patches can be deep brown or black in color. Comparing the area with recent fire alerts can help confirm the cause of the loss.

Floods, like fires, can be similarly difficult to identify, given their unpredictable patterns. Wide-spread tree cover loss near rivers or lakes, however, is highly likely to have been caused by water spilling over its banks. To confirm loss due to flood, it can be helpful to compare images of the area across time.

The construction of this dam in Cameroon caused the flooding of a significant portion of this river valley. Comparing Landsat imagery from 2015 (prior to the completion of the dam) to current imagery, shows the expansion of the river into a wide, dark lake downstream.

Mining is one of the most destructive clearing patterns. Mines for gold, copper and other minerals will strip back many layers of earth in addition to clearing any trees growing in the area in order to access the deposits underneath. This kind of open pit mine leaves gouges in the landscape that contrast starkly with surrounding forests in the imagery. Madre de Dios, Peru experienced an explosion of illegal gold mining along its rivers that has torn up large areas of Amazonian rainforest. The mining operations show up in the imagery as massive strips of circular pits, some filled with water or tailings. 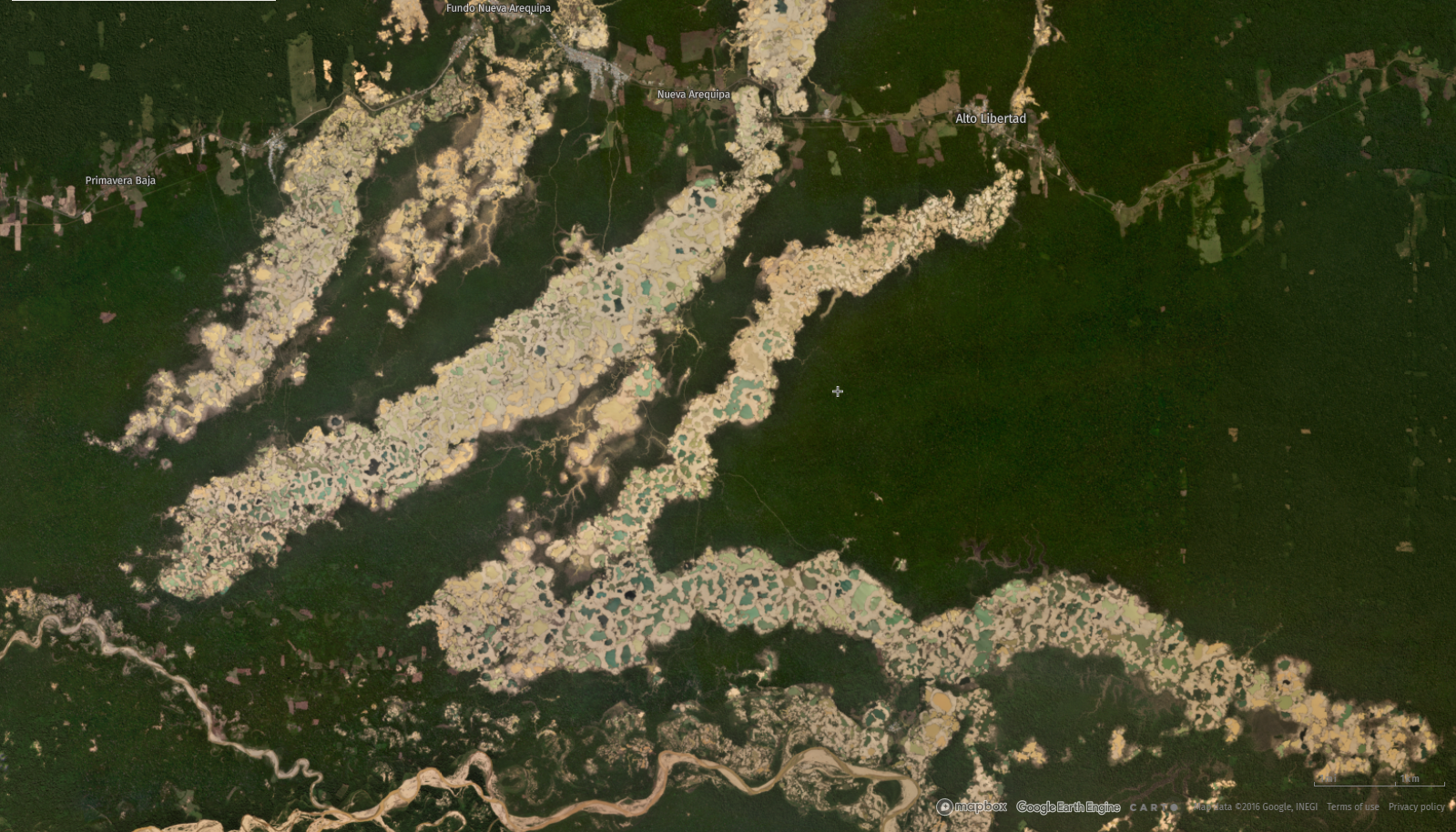 As satellite technology improves, our ability to automate the detection of different patterns in the imagery and the insights we can gain into the drivers of tree cover loss will expand alongside it. To explore recent satellite imagery, visit GFW.

Editor’s Note: Details were added to the “pasture” section on 1/3/2020 to provide clarity on where distinct patterns for cattle are most often identified.