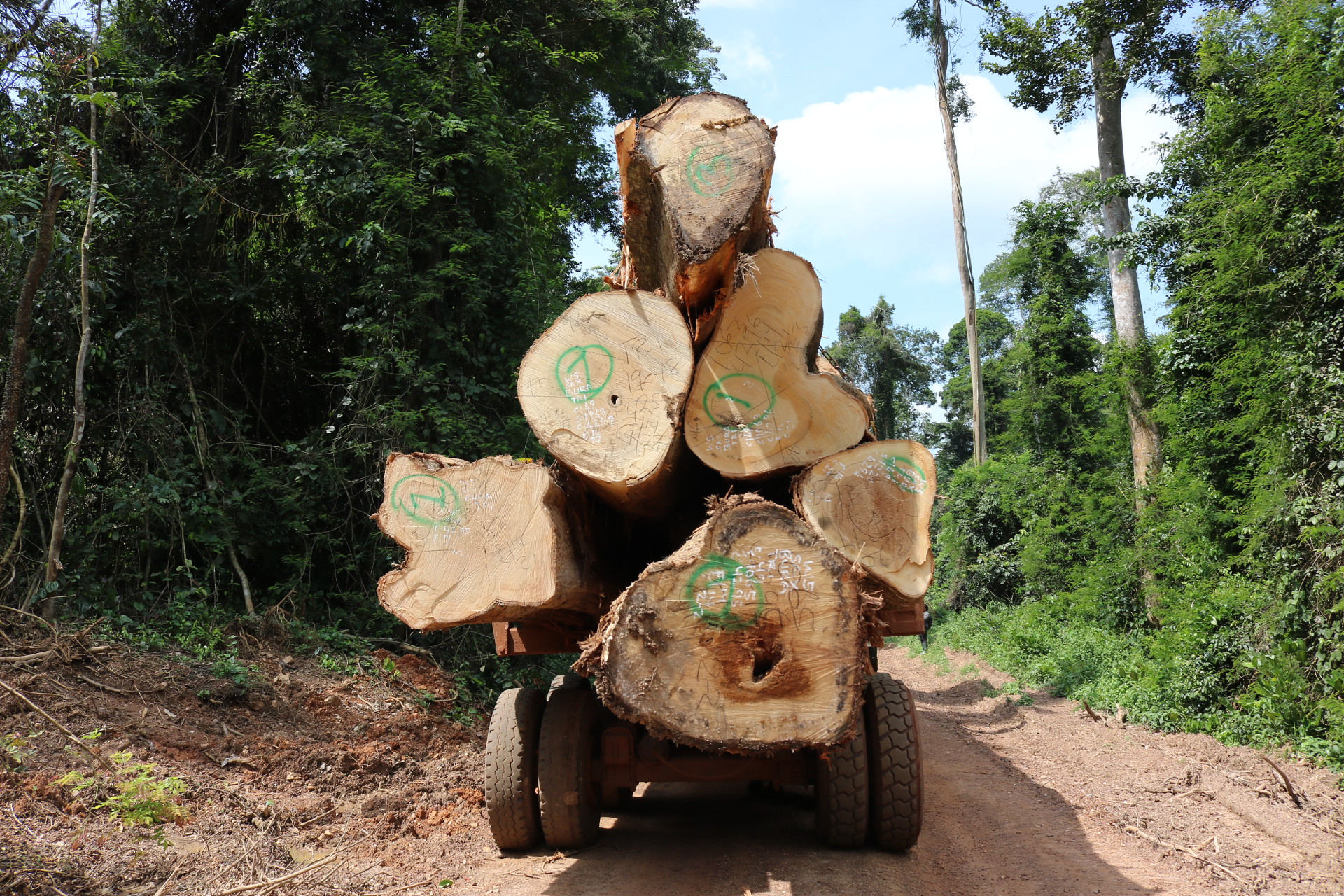 Large logs sit on a truck bed in a forest concession in Ghana.

Posted on June 2, 2020
Languages Leerlo en españolBaca dalam bahasa indonesiaLeia em portuguesLire en français
Subscribe to the
GFW newsletter
What is tree cover loss? Tree cover loss is not the same as deforestation. “Tree cover” can refer to trees in plantations as well as natural forests, and “tree cover loss” is the removal of tree canopy due to human or natural causes, including fire. The data presented here do not take tree restoration or regeneration into account and are therefore not an indication of net change. Focusing on tree cover loss within undisturbed humid tropical primary forests, however, allows us to highlight some of the world’s most critical forest areas where loss is likely to have long-term impacts.

The tropics lost 11.9 million hectares of tree cover in 2019, according to data from the University of Maryland, released today on Global Forest Watch. Nearly a third of that loss, 3.8 million hectares, occurred within humid tropical primary forests, areas of mature rainforest that are especially important for biodiversity and carbon storage. That’s the equivalent of losing a football pitch of primary forest every 6 seconds for the entire year. 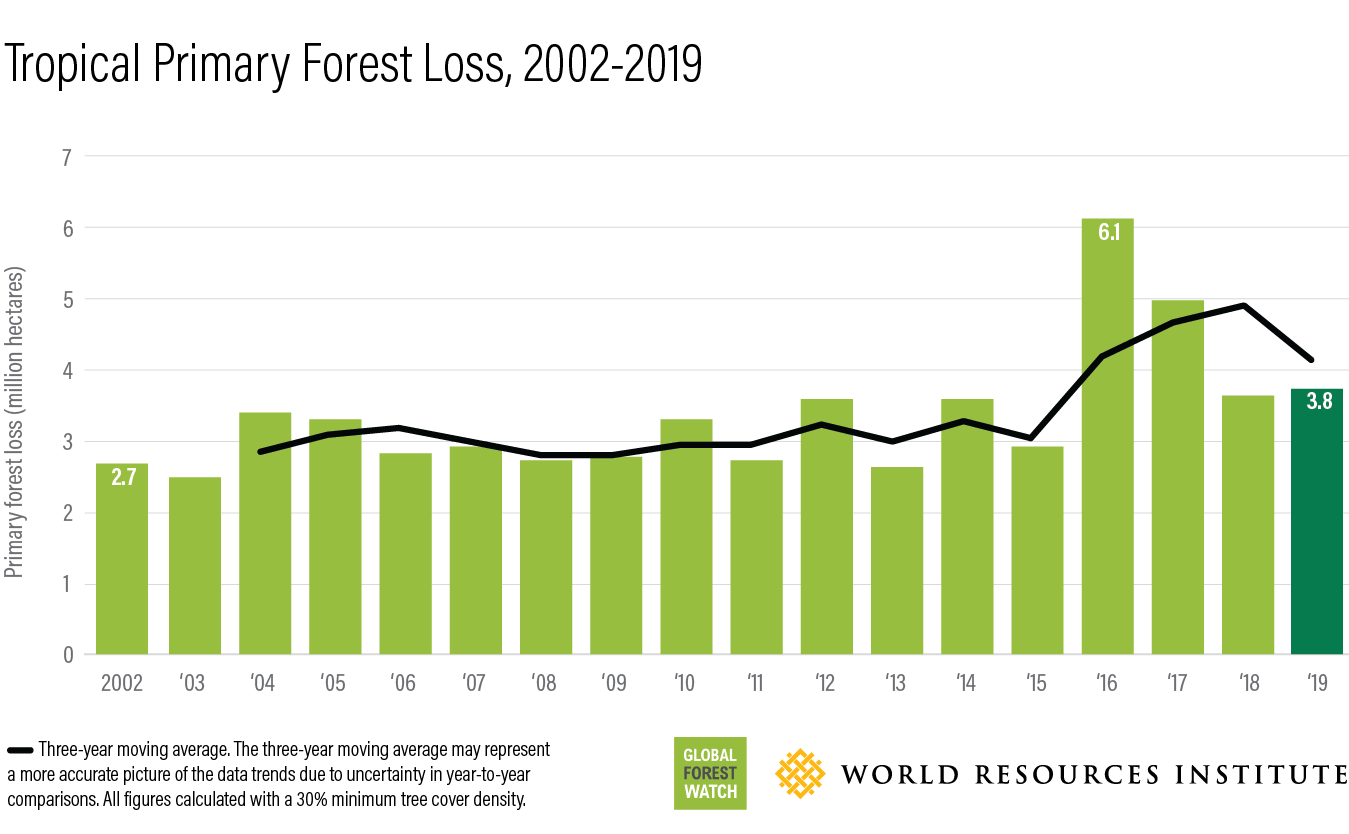 The 2019 data reveal that several countries suffered record losses, and fires created astonishing impacts in primary forests and beyond. Though the situation remains bleak at the global level, some countries showed signs of improvement, offering lessons for other nations. Here are the locations of note for tree cover loss in 2019:

Fires in Bolivia spread out of control

Bolivia experienced record-breaking tree cover loss due to fires, both within primary forests and in surrounding woodlands. The country’s total tree cover loss in 2019 was over 80% greater than the next-highest year on record.

Burn scar in Southeast Bolivia from with overlay of tree cover loss from 2019 (pink).

The widespread fires in 2019 occurred due to a combination of climatic conditions and human activity. Many of Bolivia’s fires were likely started by people, as they are every year to clear agricultural land for planting, but spread out of control into forests due to sustained winds and dry weather.

Large-scale agriculture is a major driver of deforestation in Bolivia, particularly for soy and cattle ranching. The Bolivian government made several regulatory changes in recent years to promote the expansion of agriculture, including loosening restrictions on controlled burning just months before the 2019 fires.

The province of Santa Cruz, where forests were hardest hit by fires, is Bolivia’s epicenter of large-scale agriculture. Its highly biodiverse Chiquitano Dry Forest was particularly affected, with reports that nearly 12% of it burned. Experts believe it could take hundreds of years for this unique Bolivian forest to recover fully.

Forest fires also spread into parts of Paraguay, prompting the country to consider requesting compensation from Bolivia for damages.

Brazil single-handedly accounted for over a third of all loss of humid tropical primary forests worldwide, with more primary forest lost than any other tropical country in 2019. Outside of 2016 and 2017, when forest fires resulted in unprecedented forest loss, 2019 was Brazil’s worst year for primary forests in 13 years. 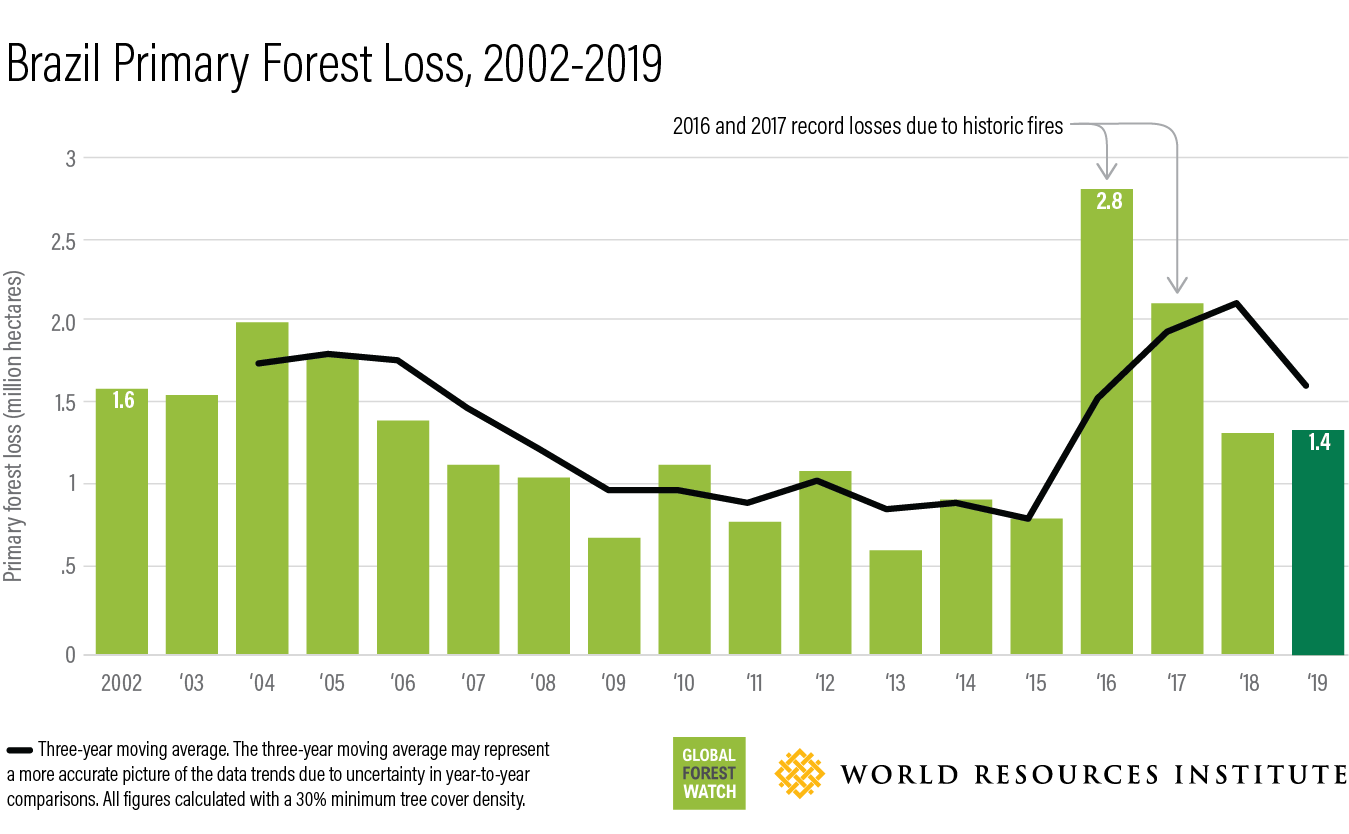 The primary forest loss data detect a wide range of forest disturbances – from deforestation for agriculture to understory fires to selective logging. While the increase in primary forest loss from 2018 to 2019 was modest, government data indicate that one particular form of forest loss — clear-cut deforestation for agriculture and other new land uses — has rapidly increased in the Brazilian Amazon over the past year (read more about different data sources here).

How is primary forest loss connected to fires? In the Brazilian Amazon, fire and primary forest loss are closely linked, even when the former does not directly result in the latter. Naturally occurring fires in the Brazilian Amazon and other tropical rainforests are very rare. Often, fires signal previous deforestation — farmers and ranchers commonly set fire to recently deforested land to clear branches and stumps. Fire also plays a role in agricultural cycles, so land that had been cleared of forest in years past may be burned again to prepare for re-planting or to clear weeds from pastures. Of course, any burning on these cleared lands has the potential to escape into surrounding forests. Escaped fires are more common in forests that have already been degraded by human activities. If the resulting damage is severe enough, the burned areas will appear on Global Forest Watch as primary forest loss, as was the case for the widespread understory fires in 2016 and 2017.

Unlike in neighboring Bolivia, forest fires in Brazil were not a major contributor to primary forest loss in 2019. The Brazilian Amazon did face unusually high fire counts in August 2019, but many of these occurred on already-deforested areas as farmers prepared land for agriculture and cattle pastures. The lack of drought, the public attention early in the fire season, and subsequent preventative action may have averted further burning in Brazil’s primary forests. 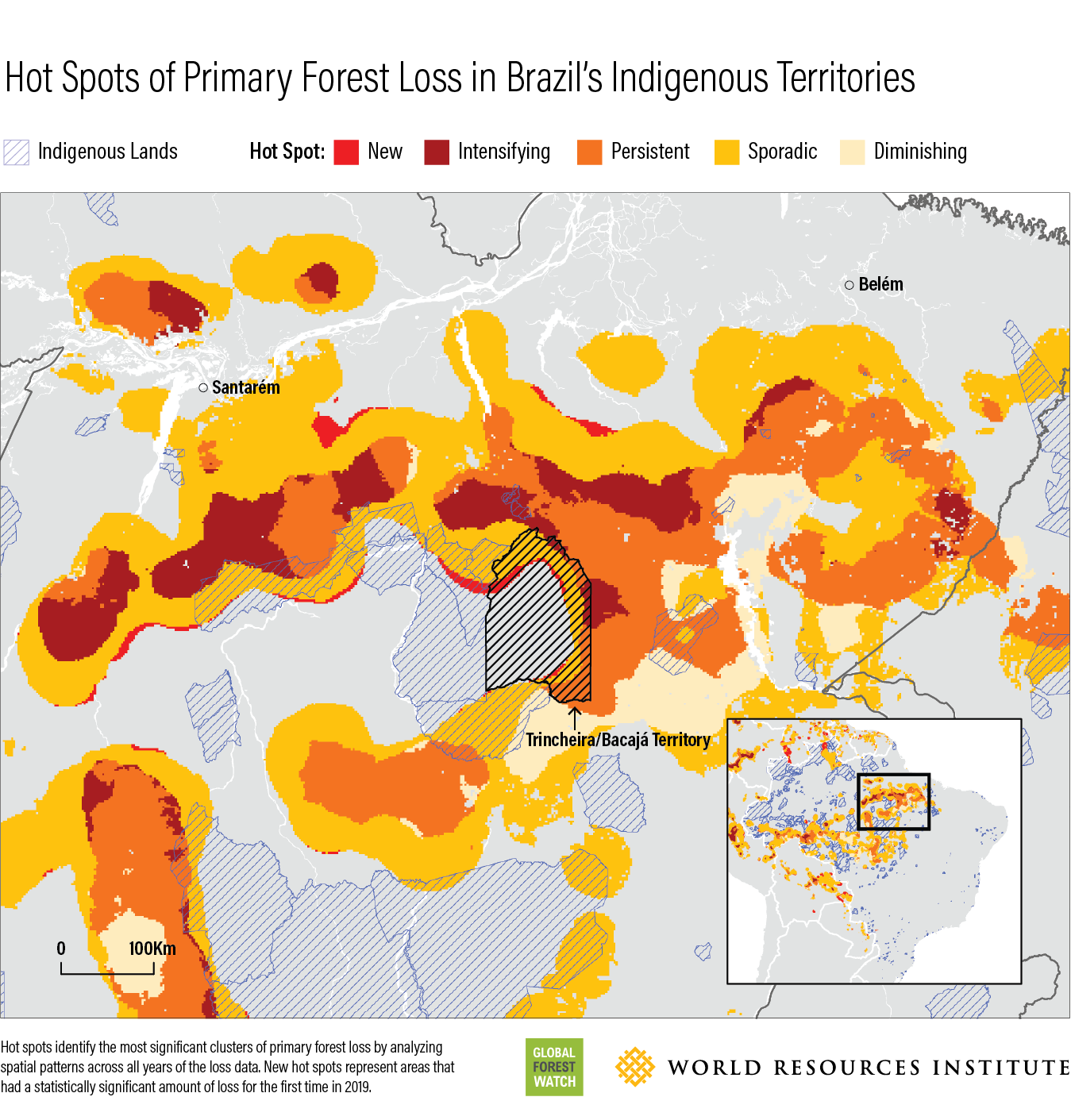 Several countries in the Congo Basin experienced sustained or worsening primary forest loss in 2019, including the Democratic Republic of Congo (DRC). Although primary forest loss slightly decreased from 2018, 2019 recorded the third-highest total annual loss on record.

Most of the primary forest loss in the DRC still appears to be in cyclical agriculture areas which typically feed local populations, but there is emerging evidence that some may be tied to large-scale commercial logging, mining and plantations. Primary forest loss in the DRC’s protected areas increased slightly, especially in reserves and hunting areas that have fewer financial resources for enforcing protection than national parks do, as well as in the eastern part of the country where there is more population pressure from displaced persons and conflict.

West Africa experienced promising downward trends after a large increase in primary forest loss last year. Ghana and Côte d’Ivoire both reduced primary forest loss by over 50% in 2019 compared to the previous year. A number of positive initiatives could be responsible, including REDD+ programs and pledges by both countries and major cocoa and chocolate companies to end deforestation. A one-year drop is encouraging, but time will tell if these efforts make an enduring impact.

Indonesia maintained lower losses for third year in a row 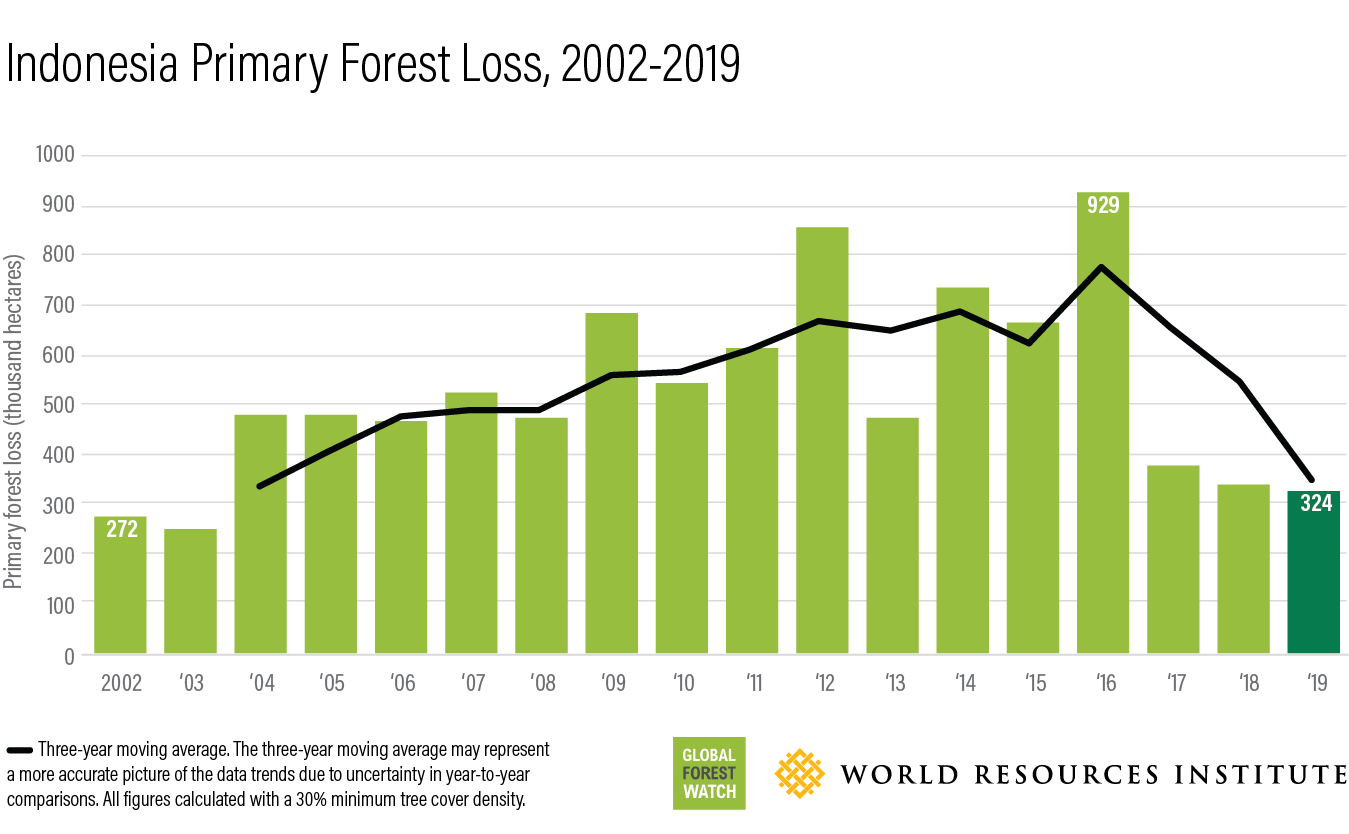 The decrease comes despite an intense fire season, which in previous years resulted in large areas of primary forest loss. While some of the damage from late-year fires might not be detected until 2020 data are available, three consecutive years of historically low loss numbers suggests that Indonesia may have turned a corner in its efforts to reduce deforestation.

Several Indonesian policies have likely contributed to this decline, including increased law enforcement to prevent forest fires and land clearing, and the now-permanent forest moratorium on clearing for oil palm plantations and logging. Papua and West Papua, which together contain over a third of Indonesia’s remaining primary forest, also continued to experience low levels of loss in 2019, coinciding with their governors declaring them “sustainable provinces.”

Loss within protected forests and protected peat areas in Indonesia was still very low, but ticked up slightly from 2018, primarily due to natural causes such as storm damage. However, the mandate of the Peat Restoration Agency (BRG), responsible for protecting and restoring carbon-rich peatlands under the direction of the president, is set to end in 2020. Indonesia will need to continue monitoring peatlands to ensure its permanent moratorium on peat draining and clearing is respected.

Colombia also experienced a significant decrease in primary forest loss in 2019, offering hope that the country may be changing course after heavy forest losses over the previous two years. Primary forest loss in Colombia rapidly increased after a 2016 peace agreement between the government and the Revolutionary Armed Forces of Colombia (FARC), which ended the violent conflict, but also led to a power vacuum on previously occupied lands in the Amazon. 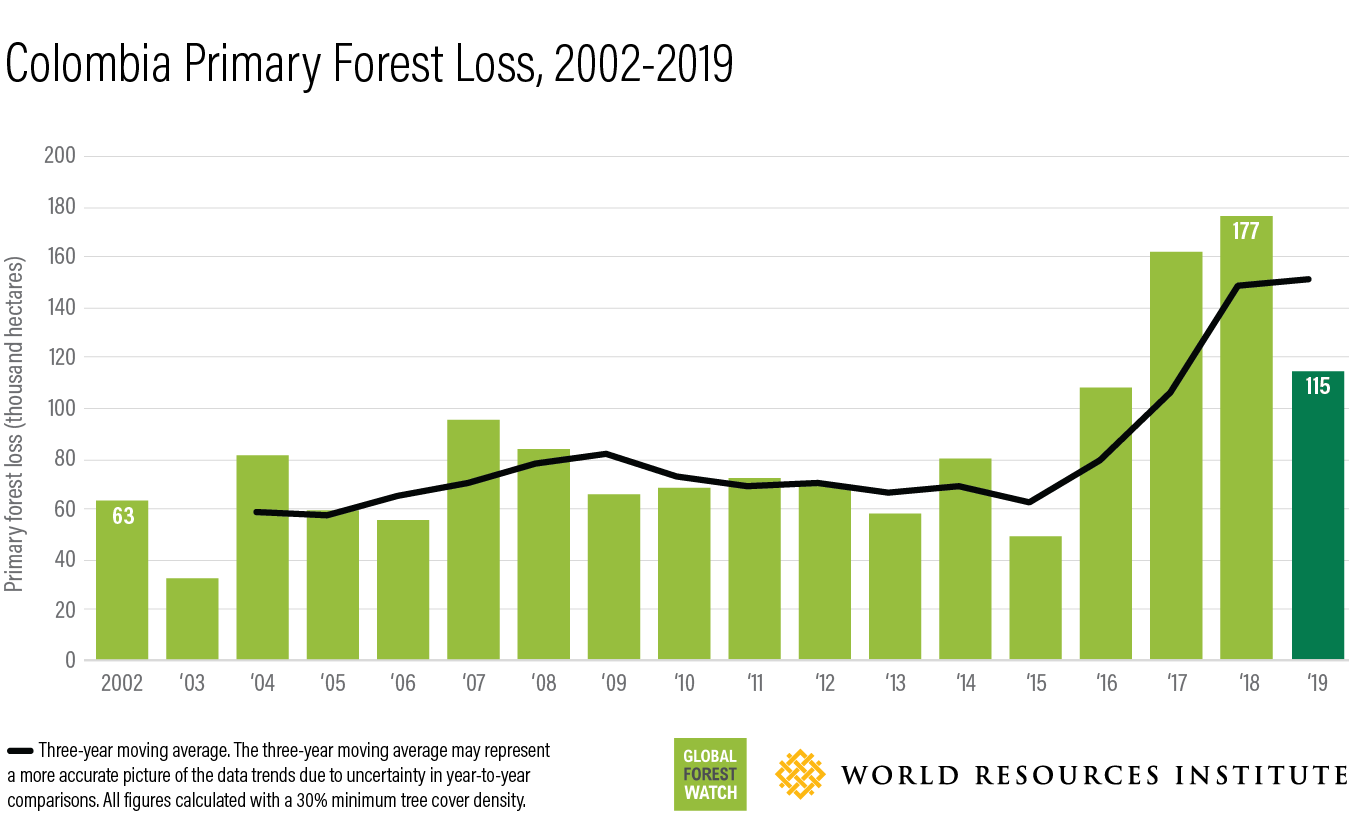 The trend reversal suggests that the Colombian government’s actions may be making an impact. The country set ambitious goals both to reduce deforestation and plant millions of trees in deforested areas. In April 2019, Colombia’s president launched “Operation Artemisa,” which employs the military, police and other public entities to stop deforestation in the country’s national parks – though its activities are not without controversy.

Despite the decline, Colombia’s struggle to reduce deforestation is far from over. Colombia’s primary forest loss in 2019 was still higher than any year on record before the peace agreement, with large losses detected in a number of protected areas and continued clearing for land grabbing and cattle ranching. The number of near-real-time deforestation alerts in Colombia were unusually high in the first part of 2020, raising concerns that the decline in primary forest loss may be short-lived.

The wildfires in Australia caused dozens of deaths, destroyed thousands of homes and killed hundreds of millions of animals. The eucalyptus-dominated woodlands where many of the blazes burned are well-adapted to cycles of fire, but the intensity, unprecedented scale and interaction of Australia’s fires with drought may result in longer-term damage.

Now is the time to double down on forest protection

Despite apparent successes by some countries in curbing forest loss, the 2019 data underscore one fact: the fight to curb tropical forest loss is far from over.

Most countries and companies will fail to meet their 2020 commitments around forests, with tropical primary forest loss remaining as high as ever. The coronavirus pandemic poses additional threats to the world’s forests in the months and years ahead. In the short-term, forests may be affected by a lack of enforcement, resulting in a higher incidence of illegal clearing and fires. In the medium-term, economic declines and stimulus measures may result in greater forest loss as countries attempt to stimulate their economies with extractive industries, as was the case in Indonesia during the Asian Financial Crisis.

Rather than sacrificing forests in pursuit of economic recovery, which will only lead to future complications for the health and livelihoods of millions of people around the world, governments can build back better. Investing in the restoration and sound stewardship of forests will create jobs, contribute to more sustainable economies and protect the forest ecosystems our world needs.

For additional trends related to the 2019 tree cover loss data, check out the Global Forest Watch dashboard pages. The authors would like to acknowledge Peter Potapov and Svetlana Turubanova from the University of Maryland, who updated the tree cover loss data set. BANNER PHOTO: Large logs sit on a truck bed in forest concession in Ghana. Photo by Maite Knorr-Evans/WRI. Originally appeared on WRI Insights.