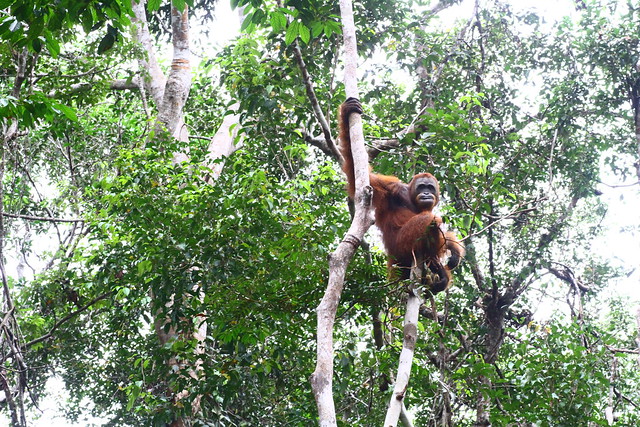 By
Areif Wijaya, Nirarta Samadhi and Reidinar Juliane
Posted on July 24, 2019
Subscribe to the
GFW newsletter

By
Areif Wijaya, Nirarta Samadhi and Reidinar Juliane
Posted on July 24, 2019
Subscribe to the
GFW newsletter

Compared to other tropical countries, Indonesia has made strong progress in reducing deforestation in recent years. The Indonesian government released its official deforestation numbers in May 2018, showing that the rate of forest loss has been declining from 2015 to 2018. The data reported deforestation of 440,000 hectares in 2018, slightly lower than the 2017 number of 480,000 hectares. Global Forest Watch released similar numbers showing a 40 percent decrease in deforestation in Indonesia’s primary forests in 2018, compared to the average annual rate of loss from 2002-2016. 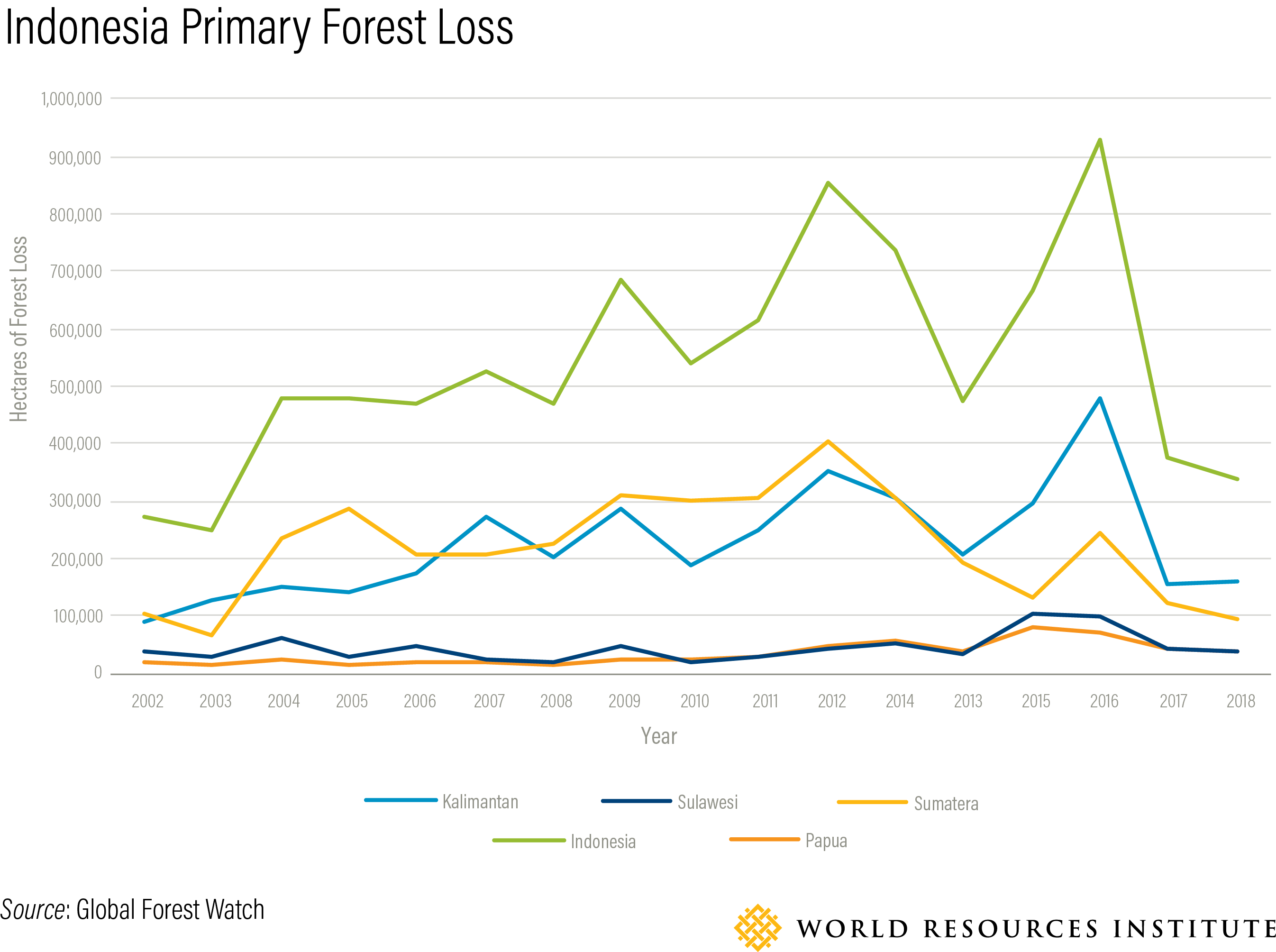 With such impressive reductions two years in a row, Indonesia seems to be moving in the right direction to achieve the forestry sector’s goals for the country’s Nationally Determined Contributions (NDCs) to the Paris Climate Agreement. It aims to limit annual deforestation to 325,000 hectares between 2020 and 2030.

Several policies have contributed to the decline of deforestation, with strengthened law enforcement to prevent forest fires and land clearing arguably being the most efficient. Efforts to restore 2.4 million hectares of degraded peatlands (mandated by Presidential Regulation in 2016) also helped reduce peatland fires, thus lowering deforestation. A moratorium policy that bans the clearing of primary forests and peatlands has also proven effective, achieving a 45 percent drop in deforestation inside moratorium areas in 2018 compared to 2002-2016. The government plans to make the moratorium permanent later this year. Another factor in the decline is the absence of El Niño-driven hot spells over the past three years, with relatively wetter weather contributing to reduced fires and deforestation.

Despite the overall decline in deforestation at the national level, several key provinces in Indonesia with primary forests and peatland continued to show increases in forest loss. 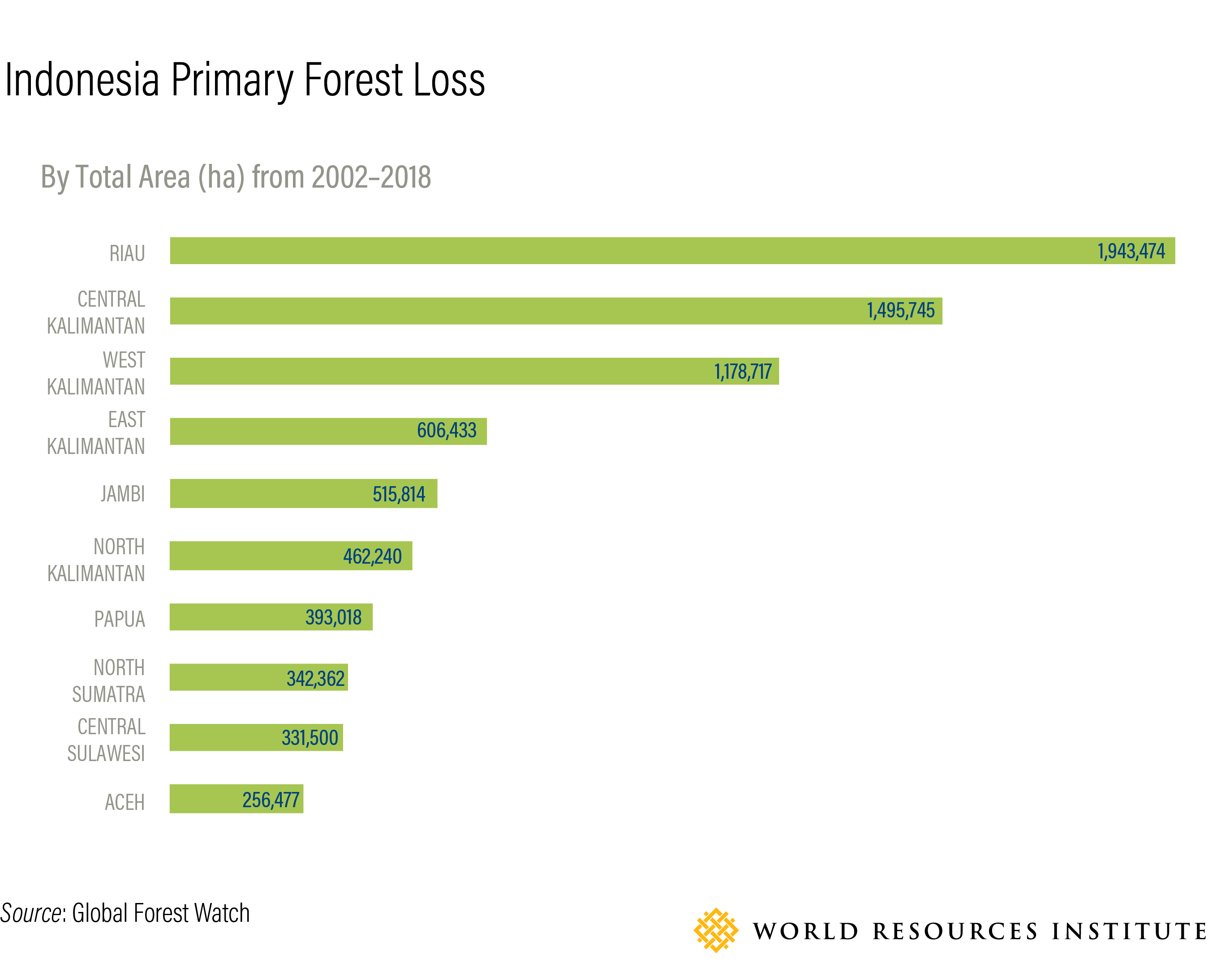 In 2018, East Kalimantan, Maluku and West Papua provinces experienced a 43 percent, 40 percent and 36 percent increase in deforestation respectively, compared to 2017. The graphic below shows the seven provinces with highest increases. Together, these provinces contain nearly one-third of the country’s primary forest—a crucially important ecosystem containing trees that can be hundreds or even thousands of years old. These trees store more carbon than other forests and are irreplaceable when it comes to sustaining biodiversity.  Protecting primary forests in these provinces is crucial, not only to achieve Indonesia’s climate targets, but also to ensure the existence of highly biodiverse areas that support livelihoods and provide food, water, clean air, medicine and more. 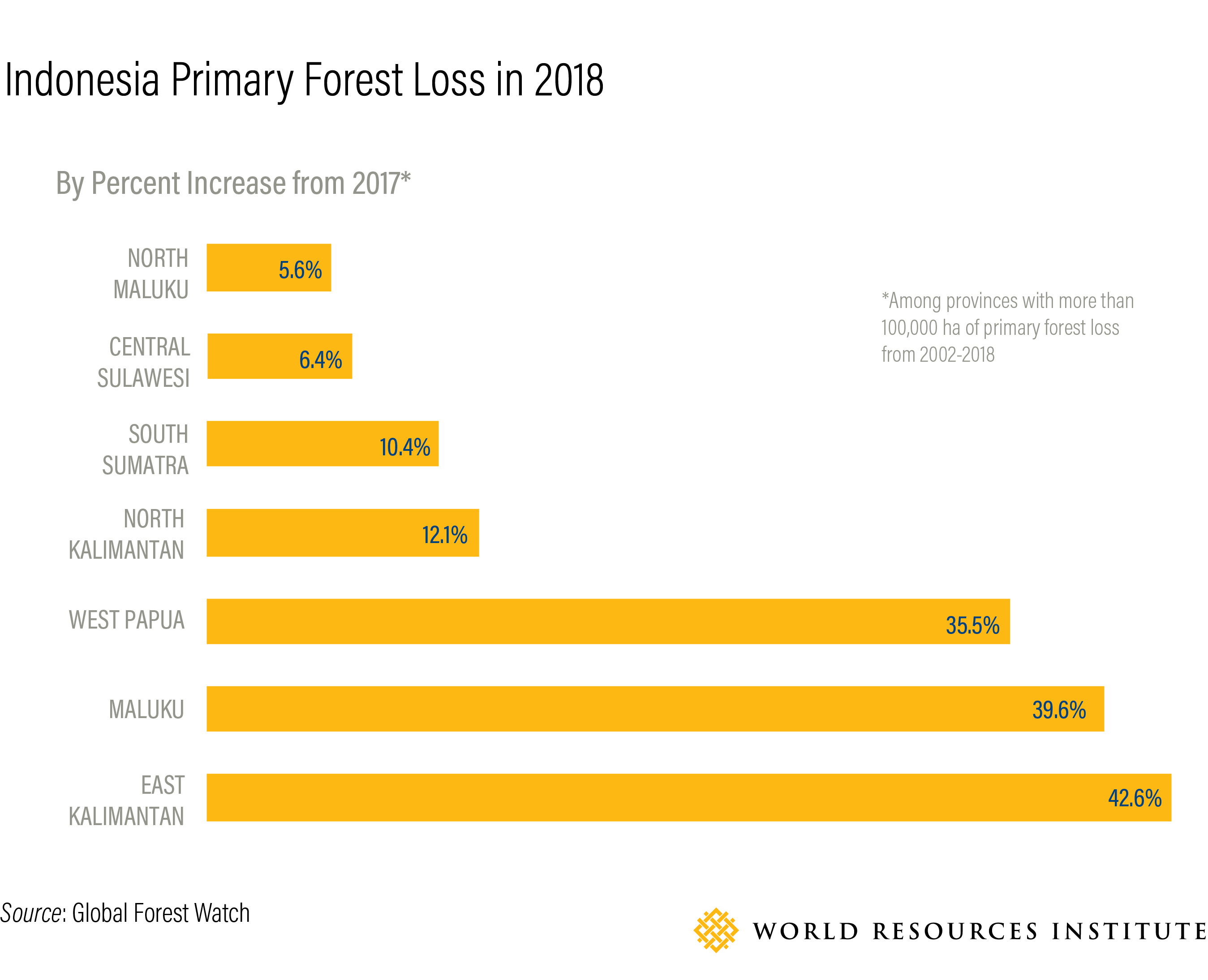 How Can the Indonesian Government Further Reduce Primary Forest Loss?

With El Niño events expected to return to Indonesia this year, action is needed now to prevent a rise in deforestation. Here are three steps the government can take to make sure its positive progress continues.

1. Continue solid commitments to protecting primary forests, especially in Papua, West Papua, Aceh and North Kalimantan. Under the UN’s REDD+ framework, Indonesia has focused more on reducing deforestation and forest degradation (“REDD”), but less on addressing the “plus” components, which include forest conservation. Recent analysis found that protecting the primary forest of Papua, coupled with restoration of degraded lands, could avoid 2.8 – 3.3 gigatons of carbon dioxide emissions, which is similar to baseline emissions projected for 2030 in Indonesia’s NDC. Failing to protect these primary forests could put the government’s emissions reduction target out of reach.

2. Expand the moratorium policy by including high-biodiversity forests and degraded forests with high-carbon stocks. In these critical areas, local economic development is a primary consideration. One option to prevent further losses is to include degraded forests controlled by local indigenous people in social forestry projects. These projects can benefit local livelihoods, ensure that non-timber forest products are managed sustainably, and help to safeguard degraded forests.

3. Aim for higher targets in forest and peatlands restoration. Recently, discussion has shifted from merely stopping deforestation to removing carbon dioxide emissions from the atmosphere. Sophisticated technologies to achieve this, such as carbon capture and storage, could be quite expensive, but natural ecosystems—like tropical forests—are highly efficient, low-cost ways to sequester emitted carbon. A solid business plan for enhancing forest and peatlands restoration efforts is key.

In football, it’s said that when you score the first goal, you get a boost of confidence to play harder. After the second goal, you gain a winning mentality that makes you play smarter. Indonesia’s remarkable progress in slowing deforestation in 2017 and 2018 shows that it’s working harder, and smarter, to save forests and achieve our climate goals—a valuable example for the global community.

BANNER PHOTO: Indonesian forests provide critical habitat for Orangutans. Photo by Ryan Albrey/Flickr. Originally appeared on WRI Insights. EDITOR’S NOTE: 8/20/19: A previous version of this blog post omitted the timespan from the graphic showing Indonesia’s primary forest loss by total area. We have since updated the post to include the timespan, which is 2002-2018. We regret the omission and any confusion it may have caused.