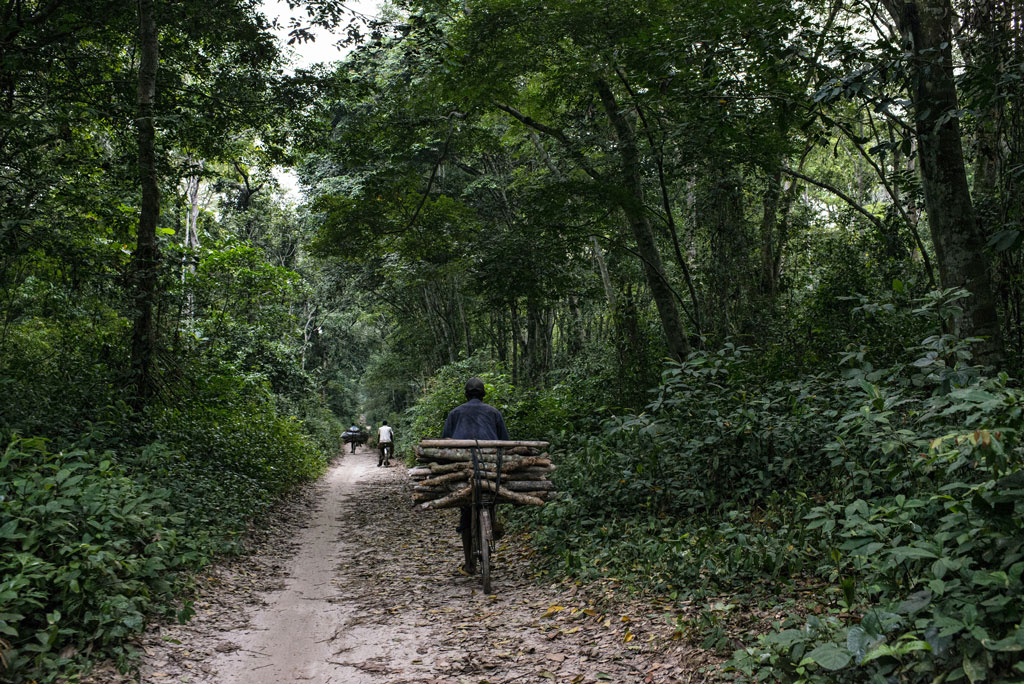 On the way from Kisangani to Masako village. Democratic Republic of Congo. Photo by Ollivier Girard/CIFOR.

Forest loss is a major concern for conservationists dedicated to protecting the Congo Basin, the planet’s second-largest tropical rainforest. Data like tree cover loss on Global Forest Watch help monitor changes in forest landscapes like the Congo Basin, but without other contextual information, it is difficult to know how much of that loss is true deforestation and how much of it is the result of cyclical land use practices.

New research by the University of Maryland’s Global Land Analysis and Discovery (GLAD) laboratory gets us closer to that answer. The study shows that 92.2 percent of tree cover loss in the Democratic Republic of Congo (DRC) and 48.2 percent in the Republic of Congo (ROC) is linked to small-scale shifting cultivation, also known as slash-and-burn or swidden agriculture.

Rapidly growing populations in the two countries have driven rapid expansion of cultivated land in the region, increasing pressure on the Congo Basin forest. Shifting cultivation has been the predominant farming practice in Central Africa for centuries where soil quality is poor and farmers do not have access to alternative means like fertilizers. After clearing the land and farming for a short period, farmers allow secondary forest to grow and soils to regain productivity during what’s known as the fallow period before clearing and replanting the land. This system results in what researchers call the “rural complex,” a mosaic of forest patches, cleared land, active fields, fallow fields and land used for other purposes, such as logging. This constantly changing mish mash of land use types makes it exceptionally difficult to map forests and monitor deforestation using only satellite-based data.

Using what limited data are available on small-scale agricultural land use in the Congo Basin, the GLAD team mapped the rural complex of DRC. They used forest fragmentation to differentiate between the rural complex, fragmented forest and undisturbed forest. They also determined the amount of actively farmed land, fallow land and forest within DRC’s rural complex.

Taking stock of these areas helps us understand the patterns of shifting cultivation as well as the rotation period, which indicates how intensely the land is used. Shorter rotation periods usually result from higher demand for cultivation and leads to fewer trees, worse soil quality and expansion into primary forest. World Resources Institute’s Congo team recently replicated GLAD’s methods to map the rural complex for the Republic of Congo. This work was carried out to inform the ongoing national land use reform process in ROC and was financed by the CARPE program, a U.S. government-funded conservation initiative.

Forest fragmentation near Kisangani, Democratic Republic of the Congo. The rural complex is shown in black, “core” undisturbed forest in green and perforated forest in red. See legend in the figure above for more information.

The DRC and ROC rural complex maps together enable us to better understand which loss is caused by shifting cultivation cycling back to previously farmed areas, and which shows new deforestation, degradation or fragmentation.

Most of the tree cover loss in DRC between 2000 and 2015 happened within areas established as part of the rural complex prior to 2000 (black). Some of the loss contributes to the expansion of the rural complex (grey and white), but very little loss occurs in the primary forest area.

Additionally, the industrial logging industry in ROC systematically logs forests, leading to a higher clearing rate in forests compared to DRC, where 12 million hectares of logging concessions were canceled in 2012 and a moratorium has prevented the issuance of new logging concessions since 2004. Although tree cover loss is more contained within the rural complex than previously thought, the rural complex itself is expanding into surrounding primary forest at a rate of 1 percent per year in DRC and 1.6 percent per year in ROC. Even in areas of primary forest that haven’t been affected by rural complex expansion, the rate of fragmentation is rising. The continued destruction and degradation of healthy forests through farming encroachment, road construction and logging will have major consequences, including reduced ecological functioning and biodiversity habitat.

While the expansion of the rural complex is increasing steadily in some areas, the majority of tree cover loss in the DRC and the ROC is accounted for by shifting cultivation onto previously farmed lands rather than new deforestation. Mapping and monitoring the rural complex will enable us to identify areas where rotation periods become shorter, land scarcer and expansion into forests more likely. This will help decision-makers prioritize areas and implement strategies that can reduce new deforestation in the DRC and ROC. In the absence of information on traditional land-use rights, these maps can also help identify areas potentially under use by smallholder farmers and forest communities. This can help prevent further marginalization of these groups resulting from land-use conflicts, including land grabs. The rural complex data layer will be published in the Forest Atlases for DRC and ROC and we hope that it can improve accountability for deforestation and decision-making in the region.