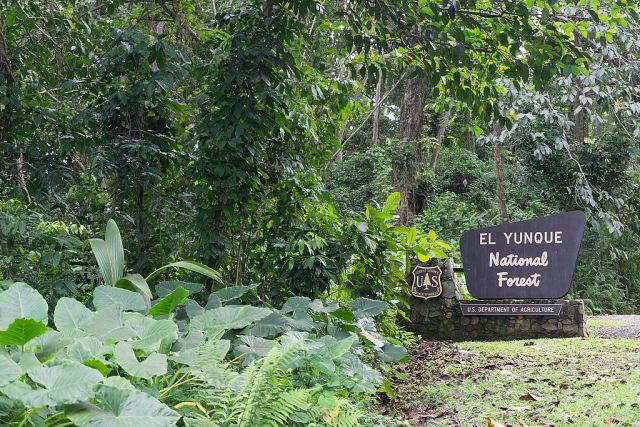 While Puerto Rico’s People Still Suffer the Effects of Hurricane Maria, its Forests Are Faring Much Better

Puerto Rico is no stranger to extreme events. Throughout recorded history, the island has been in the eye path of more than 50 tropical storms. It’s still recovering from last year’s Hurricane Maria as the 2018 hurricane season brings mounting concerns for more storm-related damages.

However, there is one part of the island that is made for resilience— forests.

How Were Puerto Rico’s Forests Affected by Hurricane Maria?

Hurricane Maria made landfall in Puerto Rico on September 20, 2017 as a Category 4 hurricane, with sustained wind speeds just below 155 mph, gusts of 175-195 mph, and rainfall of up to 38 inches in some areas. The entire island suffered more than $90 billion in damages, the third-costliest hurricane in U.S. history.

The eye of the storm traveled southeast to northwest across the island, placing some of the strongest winds in the storm over Puerto Rico’s largest forest, El Yunque National Forest, also known as the Luquillo Experimental Forest. The forest sits atop a mountain, making it more vulnerable to high winds and landslides after torrential downpours. Data from Global Forest Watch show a 10 percent loss of tree cover in 2017, compared tree cover in 2000; more than 50,000 hectares were affected. 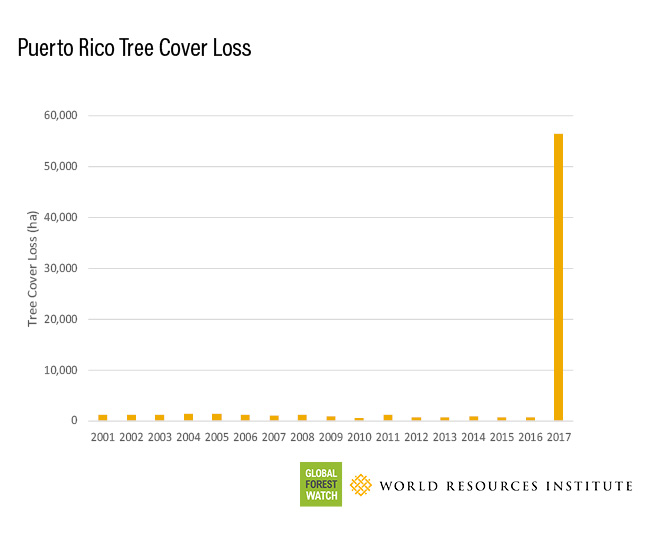 Loss was especially pronounced over areas of higher elevation, as shown in the comparison below. 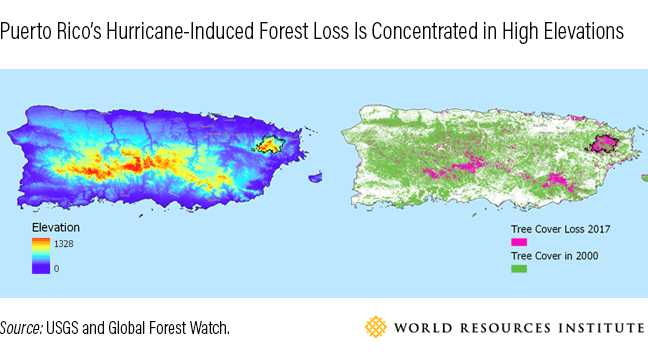 Immediately after Hurricane Maria hit, El Yunque exhibited de-greening that can be seen clearly in the high-resolution composite satellite images below, collected by Planet. Satellite images also show how quickly the forests have since rebounded. A composite of images from April to June 2018 shows significant regrowth just seven months after the hurricane hit.

Move the slider to see satellite of images of El Yunque before and after Hurricane Maria. Satellite images via Planet.

How Do We Know Puerto Rico’s Forests Will Recover?

The United States Forest Service (USFS) recently completed a field survey of permanent plots, which they’ve been doing every five years since 1988. Preliminary results this year indicate that while Hurricane Maria blew off foliage and canopy (which registered as tree cover loss on Global Forest Watch), 87 percent of tree trunks are still standing. Though most of the leaves are stripped and many branches snapped, only a small proportion of trees were uprooted or completely felled.

Move the slider to see a photo of El Yunque in 2016, before Hurricane Maria, and 2017, after Hurricane Maria. Photo credit: Sajyasingh/Wikimedia Commons and Mark Davis/US Fish and Wildlife Service

Tropical forests have shown their resilience to severe storms time and again in Puerto Rico and other areas of the world. The Luquillo Experimental Forest in El Yunque is the longest continuously measured tropical forest in the world, with up to 75 years of observations at some sites. Before Hurricane Maria, Hurricane Hugo in 1989 was the most intense storm to make landfall in Puerto Rico in 57 years, with wind speeds of 126 mph and a maximum rainfall of 17 inches. Within just five years of Hugo’s landfall, observations from USFS showed that vegetation health indicators, like aboveground biomass, were similar to readings before the storm. In 10 years, stem density values surpassed those observed before the hurricane.

When Hurricane Georges made landfall in 1998, the forest was still in recovery mode after Hurricane Hugo.  Even still, scientists were hard-pressed to find measurable effects of the storm on the forest structure, other than some branch loss and defoliation in the canopy.

Stripped leaves and fallen branches after a hurricane also create a new layer of rich, organic matter that encourages new tree growth. While the Global Forest Watch platform currently reports only annual tree cover loss, upcoming data on annual tree cover gain, scheduled for release in the coming year, will allow monitoring of regrowth and re-establishment of the tree canopy in El Yunque.

Healthy forests provide a multitude of ecosystem services to an island like Puerto Rico, including decreasing the intensity of floods, providing habitats for biodiversity, filtering water, and providing sites for eco-tourism attractions, raw materials and cultural importance. Over the past century, there has been a trend towards reforestation in Puerto Rico. Forests covered just 6 percent of the island in the late 1940s, as trees were cleared to make way for agriculture. But as people emigrated from rural to urban areas and to the U.S. mainland, forests began to flourish again. By 2010, trees covered nearly 50 percent of Puerto Rico. Although we might see short-term damage to trees from storms and other natural disturbances, increasing overall forest cover helps to lessen the severity of extreme events and decreases the amount of time it takes for trees—and people—to recover.