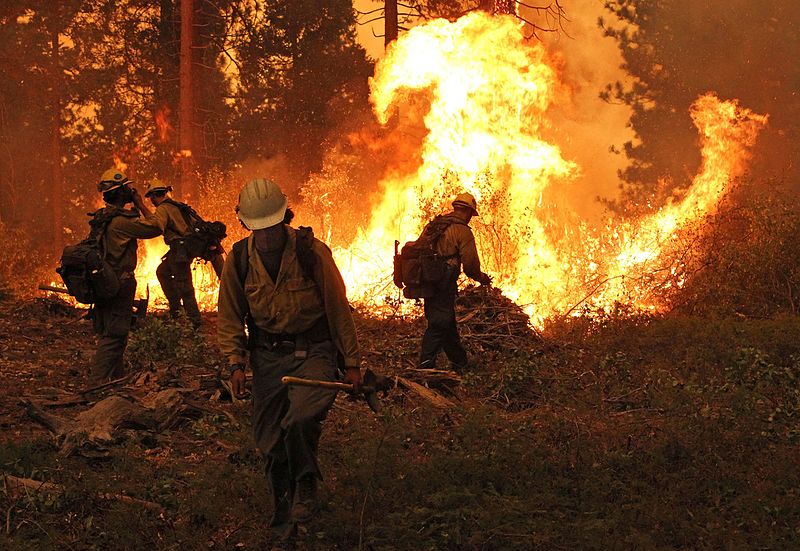 California’s Wine Country Wildfires Are Among the Worst on Record

By Susan Minnemeyer and Octavia Payne The wind-fueled fires that swept across Northern California last week, which resulted in at least 41 deaths (the largest death toll from fires in California’s history), hundreds missing and roughly 75,000 evacuated, are among the worst the state’s seen, according to active fire alerts produced by NASA and available on Global Forest Watch Fires (GFW Fires). These alerts not only pinpoint the areas most affected by the ongoing fires, they show that in California, 2017 now has the highest total annual fire alerts of the past five years, including 2015—the worst year on record for U.S. wildfires in total area burned. 2015 was also a benchmark year for fire outbreaks across the world caused by one of the strongest El Niños in history and the most acres burned in the U.S. 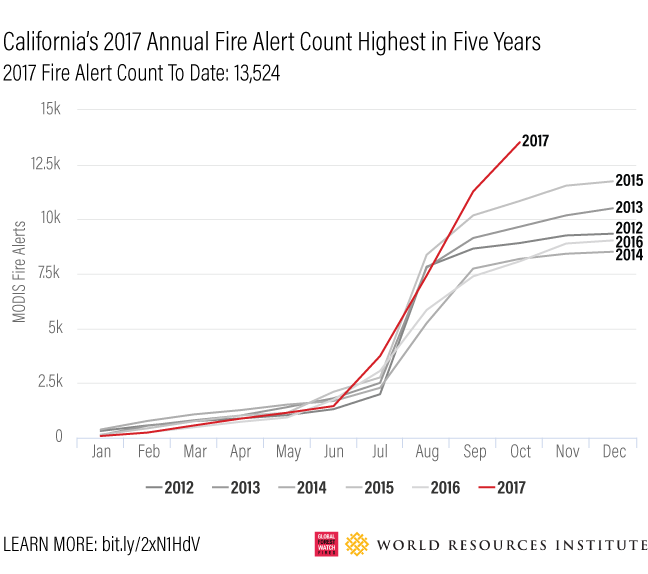 Fire data and media reports indicate that Sonoma and Napa counties, in the heart of Northern California Wine Country, along with Mendocino county, have been the most severely affected. Data on GFW Fires show that between October 8-16, the three counties together accounted for more than 60 percent of fire alerts in California (13,915 out of 21,857 statewide) and were the top three counties for fire alerts in the U.S. Sonoma and Napa Counties each had more fire alerts than the counties ranked 5th through 10th combined. 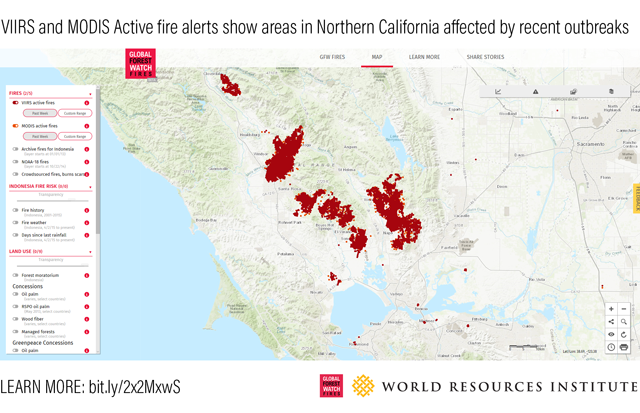 The California Department of Forestry and Fire Protection reported that as of October 17, more than 245,000 acres had burned—an area three times the size of San Francisco and Oakland combined. Red flag warnings from the National Weather Service, indicating the highest level of threat, were still in place for Redding down through San Jose over the weekend. Officials blame the initial outbreak on Diablo winds, which typically originate inland and become hotter, dryer and stronger as they move toward the coast, fanning flames beyond control. Wind direction data on GFW Fires (below) show the winds that helped fan the flames overnight and into the morning of October 9. 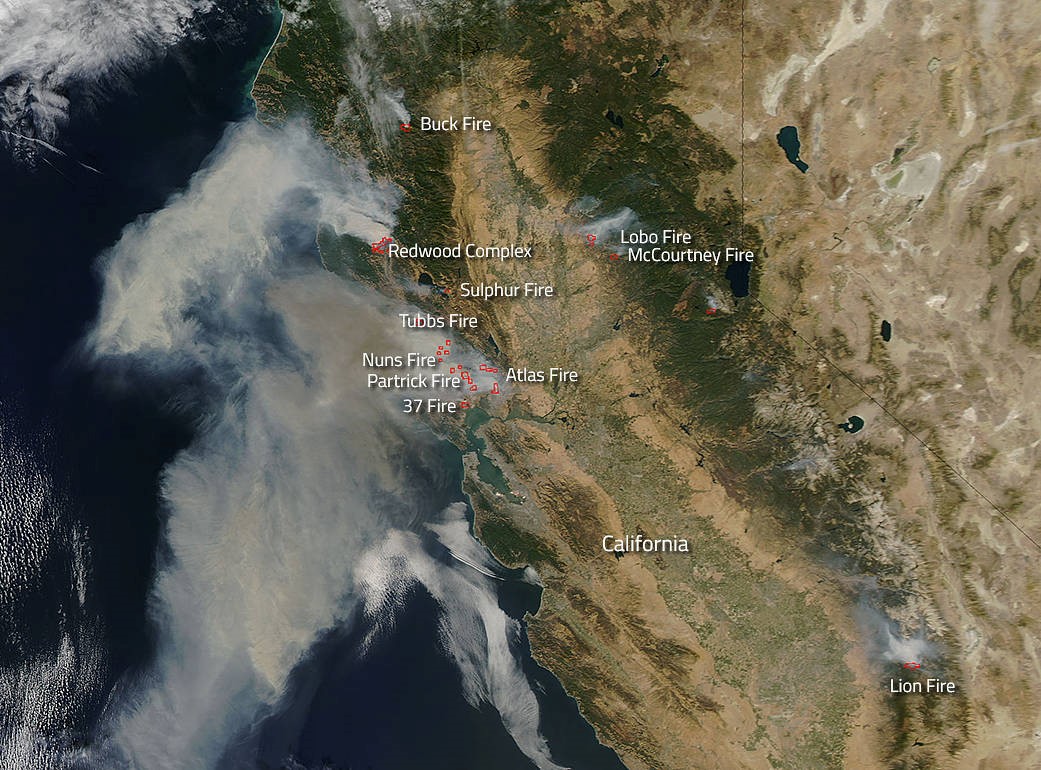 Smoke plumes from wildfires across the Napa and Sonoma Valleys as seen from space. (Source: NASA Fire & Smoke).

California is just one state experiencing one of its most severe and costly fire seasons. Montana and Oregon have also had more fire alerts in 2017 than in the past five years, though seasonal rains and snow have dampened fires across the Pacific Northwest and Northern Rockies. Still, the U.S. Forest Service has already spent a record $2.7 billion fighting fires this year, and that total will likely rise as fires rage on in California. This continues the trend of increased spending on fire suppression, which has grown from 16 percent of the U.S. Forest Service’s annual budget in 1995 to more than 50 percent in 2015 and is projected to exceed 67 percent by 2025. Ironically, much of that budget is intended to fund fire prevention services to avoid outbreaks in the first place. U.S. Secretary of Agriculture Sonny Perdue has called on Congress to allocate emergency funds so major fires can be treated like other disasters and leave the fire prevention funds for firefighting. Additionally, new mechanisms such as Forest Resilience Bonds (FRB) that raise private capital for forest restoration and fire prevention could help fill the funding gap. FRB investors earn their money back from beneficiaries who, in theory, save by avoiding costs associated with fire suppression, water quality and volume protection, sedimentation, carbon emissions and infrastructure protection. 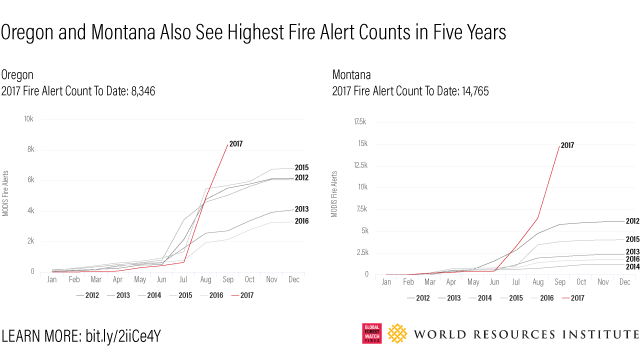 More Damage after the Fires Are Out

Wildfires are a growing U.S. problem, due in large part to climate-related factors such as drought and higher temperatures. This year’s fires have caused widespread destruction, along with significant air pollution and haze across California and the Pacific Northwest. Fires may also increase the likelihood of landslides on steep slopes and floods leading to property damage and sedimentation impairment of drinking water and hydropower. Fort McMurray in Canada’s Alberta Province experienced contamination of their drinking water supply causing a spike in water treatment costs. The city of Portland, Oregon, is closely monitoring water quality after this year’s Eagle Creek fire in the Columbia River Gorge burned much of the Bull Run watershed that supplies the city’s drinking water. California’s Diablo and Santa Ana winds – strong winds that periodically carry hot, dry air from inland deserts to coastal areas – may recur during the fall season and may generate extreme fire risk again if the weather stays dry. Stay up to date on current fire conditions by using GFW Fires, featuring near real-time active fire alerts.

BANNER PHOTO: Silver State Interagency Hotshot Crew (IHC) at work on a burning operation at the Rim Fire in the Stanislaus National Forest near in California. Photo by Mike McMillan/Wikimedia Commons.