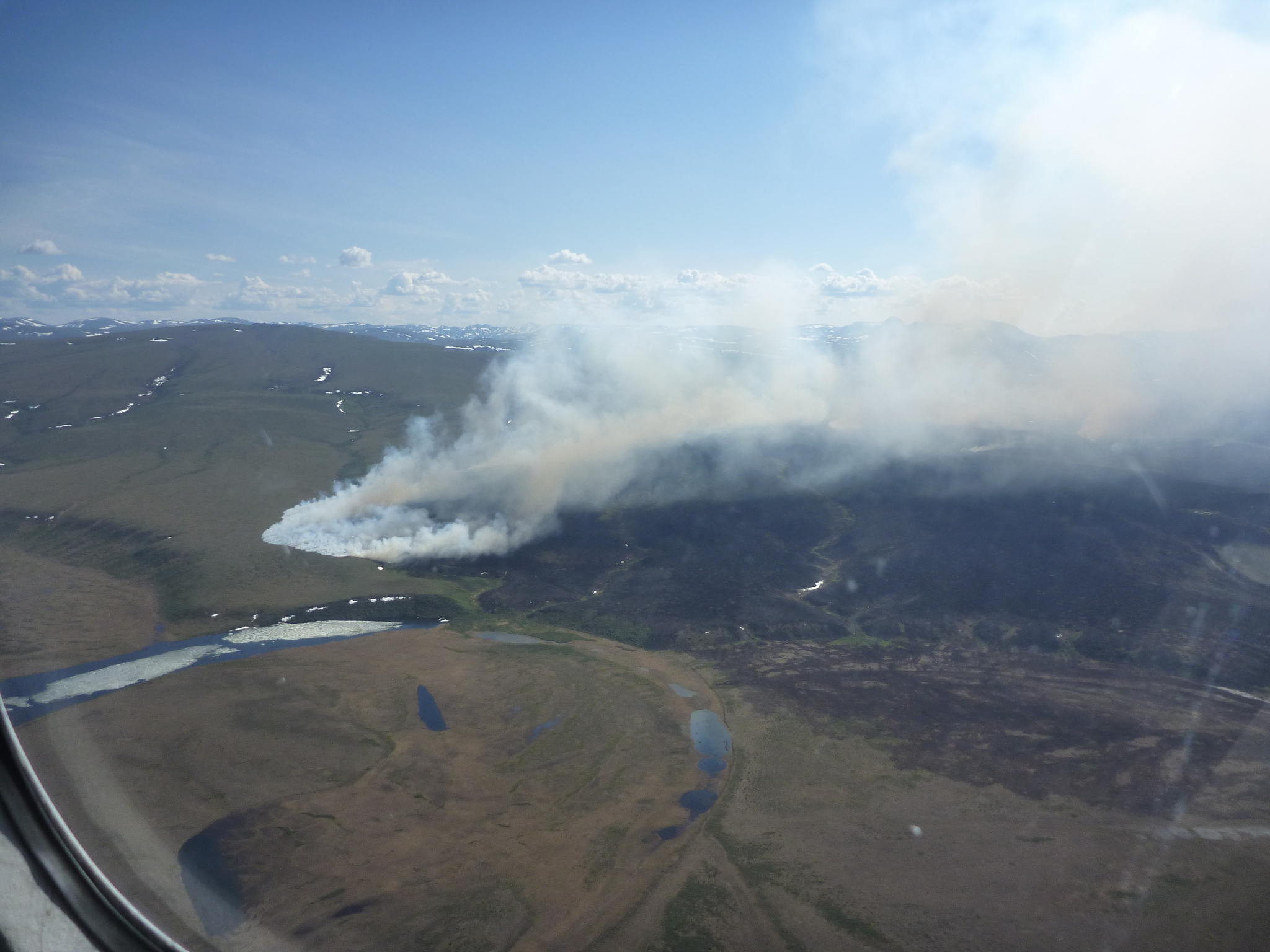 Indonesia fire alerts spiked to their highest level of the year yesterday, amid forecasts that the developing El Nino may be even stronger than the 1997-98 warming that led to Indonesia’s most catastrophic fire season. With 461 high confidence* fire alerts, today’s count is the highest since the peak of over 1,000 fire alerts reached on November 1, 2014. As the El Nino develops, even larger fire outbreaks are likely to develop. 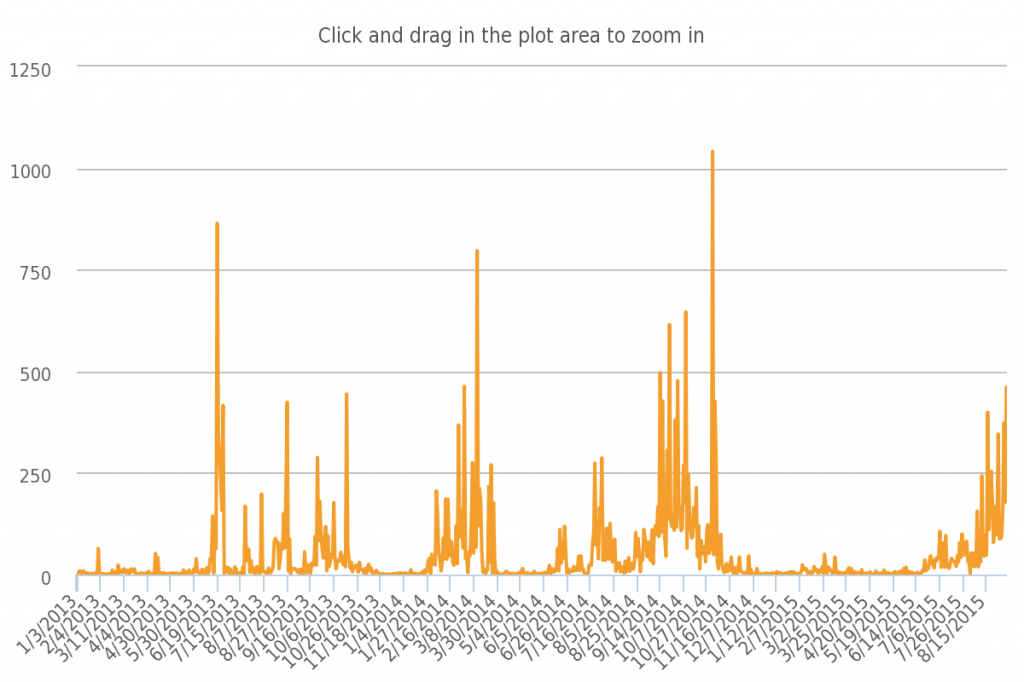 For the week ending September 2, 2015, 50 percent of the high confidence fire alerts are occurring on peat lands. Fires on peat (soil with a high proportion of partially decomposed organic material) are of particular concern because these fires are difficult to extinguish and produce great amounts of smoke and haze, contributing to poor air quality in Singapore and Malaysia, but especially within Sumatra, Indonesia. Haze is causing flights to be diverted and resulting an increase in the incidence of haze-related health issues. Air quality readings were especially poor in Medan, with air quality in the unhealthy to hazardous range over the last 2 days, and in Pekanbaru where very unhealthy air occurred on Thursday (data from BMKG via AQICN). Peat lands occur in much of eastern lowland Sumatra and along coastal areas of West and Central Kalimantan. 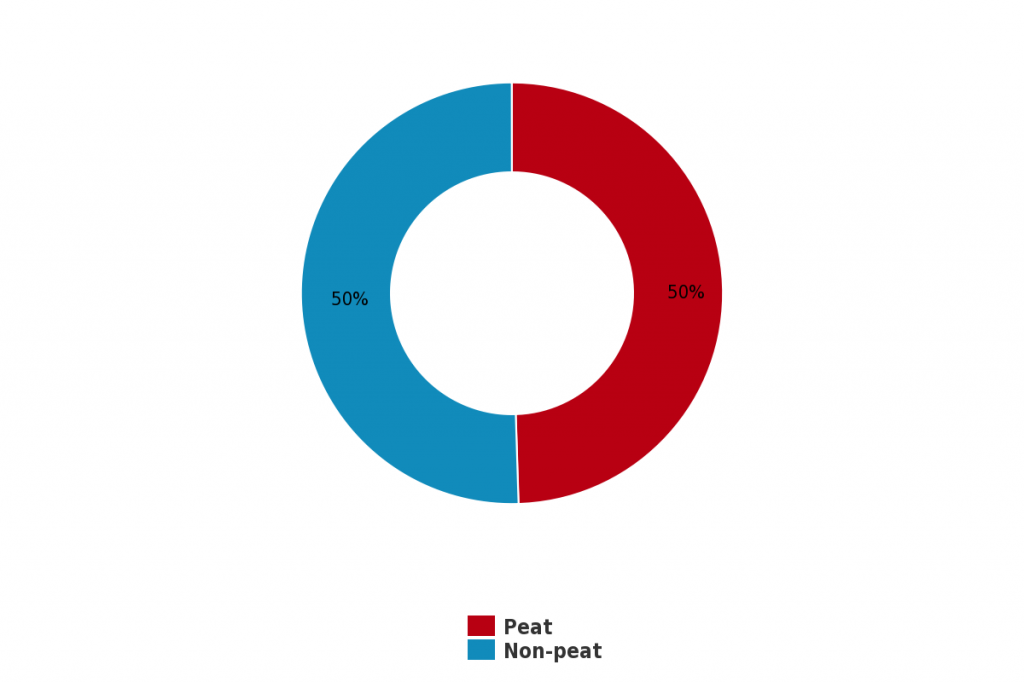 The largest clusters of fires, displayed in the map below, are happening in Jambi and South Sumatra Provinces while additional fires are occurring in Central and East Kalimantan and in Riau. Riau Province has had high numbers of fires in the past, particularly in the fire outbreak of June 2013, but is no longer leading the nation in fires. The districts with the most fire alerts are Tanjung Jabung Timur in Sumatra, with 178 high confidence fire alerts, and Ketapang in Kalimantan, with 126 (Table 1). Fire hotspots continue to occur in Indonesia’s protected areas, with 10% of fire alerts (148 fires) occurring within protected areas. Fires continue to occur within Tesso Nilo National Park, mainly in areas already cleared of forest. Active fires are also occurring within Tanjung Puting National Park, Berbak National Park, Sembilang National Park, Dangku Wildlife Reserve, and along the perimeter of Kerinci Seblat National Park. 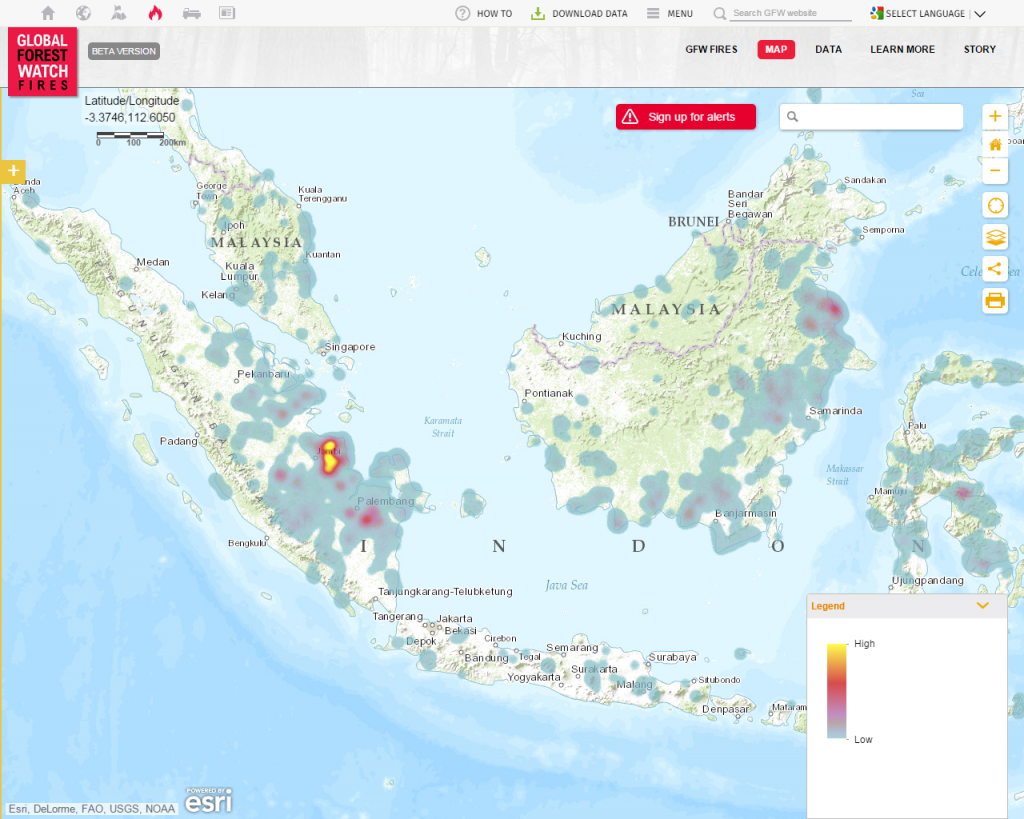 Table 1. DISTRICTS WITH THE GREATEST NUMBER OF FIRE ALERTS 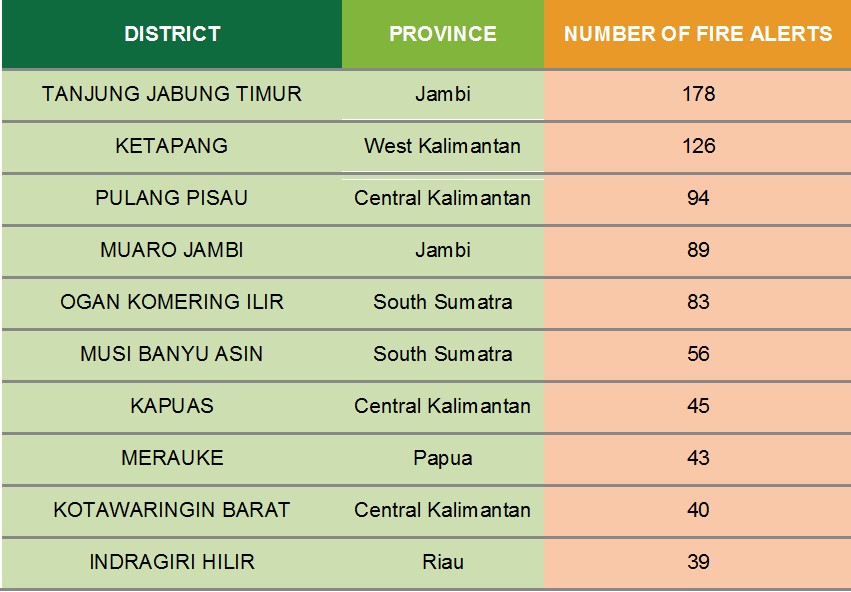 High resolution images acquired by Digital Globe reveal areas where some of the largest fire outbreaks are occurring, within South Sumatra and Jambi Provinces. The images below, captured with the Worldview-3 Satellite, show active fires within a peat swamp in a timber concession.  Both as a false-color image showing smoke plumes from active fires, burned areas in black and healthy vegetation in red (left) and as a short wave infrared (SWIR) image that detects heat, displaying actively burning areas in orange, yellow and white, revealing the size and shape of the ongoing fire.

On the left is a false-color image, where healthy vegetation is displayed in red, and burned areas are shown as black. On the right, the short-wave infrared images show vegetation in blue and fires in yellow and orange. Courtesy, Digital Globe / Global Forest Watch.

The images above show a concession managed by PT Dyera Hutani Lestari: (-1.278284, 103.924176).  This Jelutung (swamp rubber) plantation on degraded peatland suffered massive fires in 1997 and 2003 due to dry conditions and peatland drainage, but is also burning again now. Now is the time for law enforcement agencies to use the satellite-based alerts, high-resolution images from Digital Globe, and reports from people on the ground to locate and extinguish the fires. Policy-makers should also be examining which areas are suffering the worst in order to determine where to allocate scare resources. You can also help, by visiting http://fires.globalforestwatch.org/ and sharing information on the location of fire alerts. You can post your tweets on the GFW map, submit stories from the ground, and share with your networks.

WRI used NASA’s Active Fire Data to determine the likely location of fires on the ground. This system uses the NASA MODIS satellites that survey the entire earth every 1-2 days. The sensors on these satellites detect the heat signatures of fires within the infrared spectral band. When the satellite imagery is processed, an algorithm searches for fire-like signatures. When a fire is detected, the system indicates the 1 km2 where the fire occurred with an “alert.” The system will nearly always detect fires of 1,000 m2 in size, but under ideal conditions, can detect flaming fires as small as 50 m2. Since each satellite passes over the equator twice a day, these alerts can be provided in near-real time. Fire alerts are posted on the NASA FIRMS website within 3 hours of detection by the satellite. The accuracy of fire detection has improved greatly since fire detection systems were first developed for the MODIS satellites. Today, the rate of false positives is 1/10 to 1/1000 what it was under earlier systems first developed in the early 2000s. The algorithm used to detect fires includes steps to eliminate sources of false positives from sun glint, water glint, hot desert environments and others. When the system does not have enough information to detect a fire conclusively, the fire alert is discarded. In general, night observations have higher accuracy than daytime observations. Desert ecosystems have the highest rate of false positives. Many papers have been published to validate the NASA MODIS active fire alerts for use in various applications. WRI is employing a recommendation for detecting forest clearing fires (described in Morton and Defries, 2008), identifying fires with a Brightness value ≥330 Kelvin and a Confidence value ≥ 30% to indicate fires that have a high confidence for being forest-clearing fires. Low confidence fires are lower intensity fires that could either be from non-forest-clearing fire activity (clearing fields or grass burning), or could be older fires that have decreased in intensity (smoldering rather than flaming fires). The use of this classification establishes a higher standard for fire detection than using all fire alerts equally. Sources: NASA FIRMS FAQ Morton, D., R. DeFries, J. T. Randerson, L. Giglio, W. Schroeder, and G. van der Werf. 2008. Agricultural intensification increases deforestation fire activity in Amazonia. Global Change Biology 14:2262-2276. Data Sources for Figures: NASA Fire Information for Resource Management (FIRMS) Active Fire Data, June 17, 2014 – June 23, 2014 Administrative boundaries from GADM and Center for International Forestry Research (CIFOR)