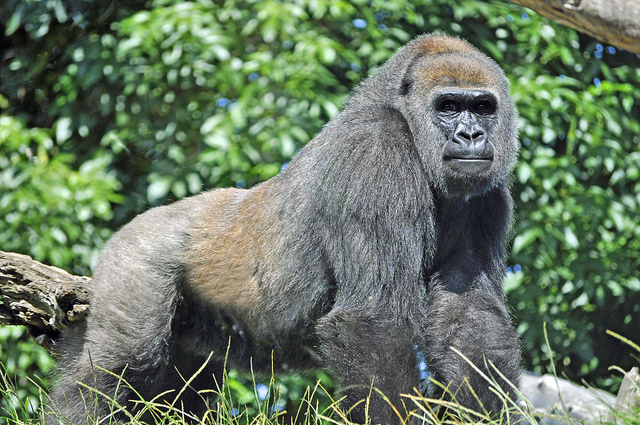 Located in western equatorial Africa is a vast expanse of green that blankets six Congo Basin countries: Cameroon, Central African Republic, Equatorial Guinea, Gabon, Democratic Republic of the Congo and Republic of the Congo. Second only to the Amazon rainforest in size, the Congo Basin rainforest is one of the most important forests in the world boasting some 10,000 animal species, including elephants, gorillas, chimpanzees, hippos and lions, as well as more than 600 species of trees. A recent study found that trees in the Congo Basin grow bigger and taller than those in other tropical rainforests thanks to its wildlife, which help to clear away smaller trees competing for space and sunlight. As a result, the Congo Basin rainforest is full of old growth trees that store huge volumes of carbon.

The aboveground live woody biomass layer on Global Forest Watch (GFW) Climate shows just how much carbon is stored in the Congo Basin and other forests across the tropics. The data display the amount of carbon stored in live woody biomass (trees and woody plants found in a forest) using a color gradient—the brighter the green, the more carbon is stored in the area. We can thus visually compare the carbon stores of Amazon (left) with those of the Congo Basin (right) and easily see that the Congo Basin has a higher density, reinforcing the importance of this region for climate mitigation. This rainforest is also an economic engine in the region. Central African countries produce roughly 80 percent of all African timber. Although relatively small on the global scale, this production is significant regionally as logging alone makes up 6 percent of the GDP in Cameroon, Central African Republic and the Republic of Congo and employs more than 50,000 people across the Congo Basin. But these economic benefits can be at odds with the forest’s ecological importance. Industrial logging is the primary cause of forest degradation in the Congo Basin as logging roads make previously remote forest areas more accessible for further development or hunting, both of which have major repercussions. For example, increased hunting has led to a 62 percent decline in the region’s elephant population in just the past decade, and cutting down more carbon-dense forest can lead to greater emissions. GFW’s Congo-specific logging concessions layer, the Congo Basin logging roads layer and GLAD alerts detail the development of these consequential roads in near-real-time. For instance, users can monitor the logging concessions in central Republic of Congo, which have extensive logging road networks. Data on GFW show when these roads were first detected—many within the past year—and the loss that surrounds them. In the Ngombe concession, much of the most recent tree cover loss alerts are concentrated in the middle of its road network reinforcing the fact that logging roads are often the precursor to forest loss and degradation. Data also show that there are many relatively new logging roads outside concession areas in the Congo Basin. So, while the region currently has the lowest rate of deforestation in the tropics, there is a risk that the rate could go up in unlicensed areas.

Be part of the solution