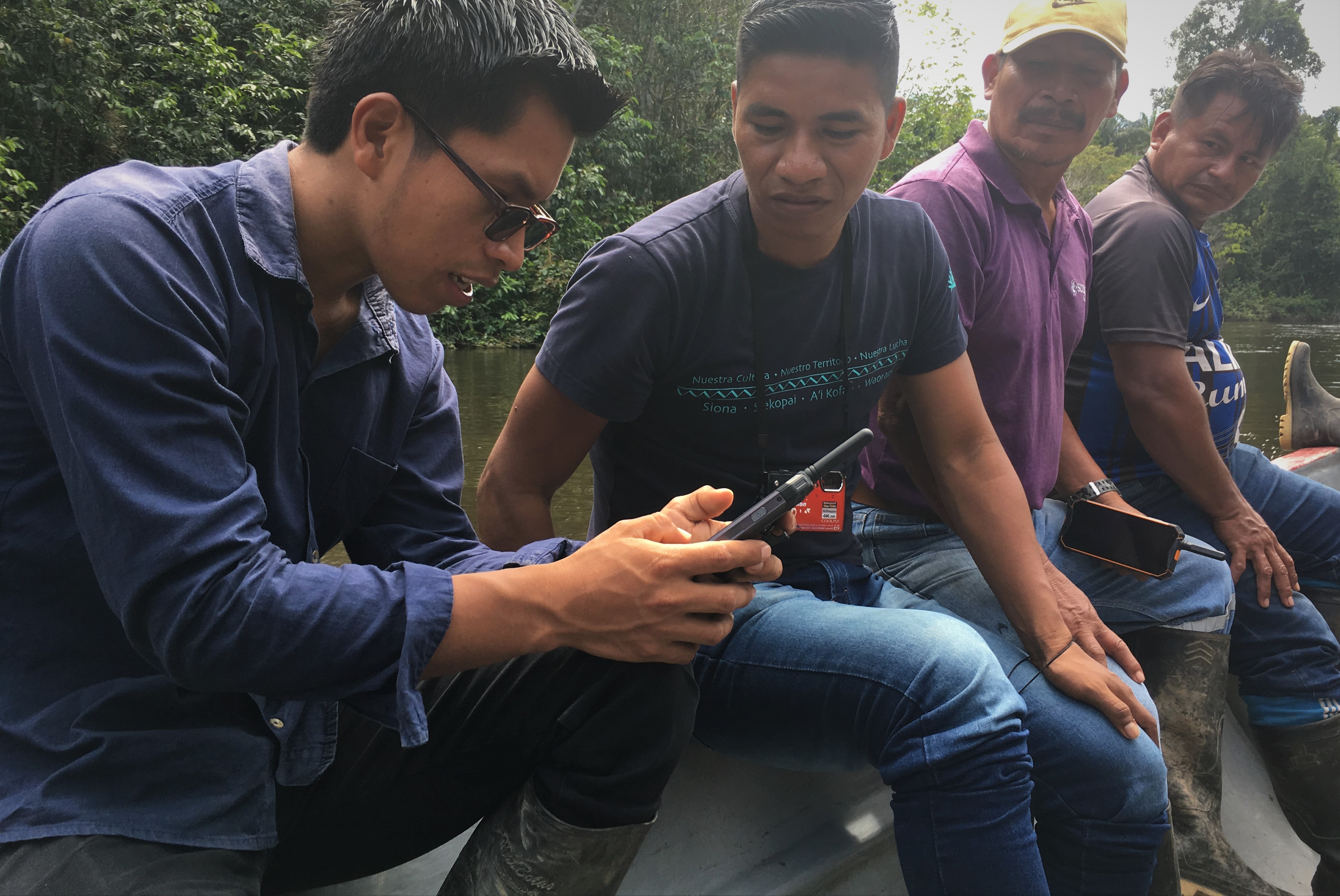 By
Jessica Webb, Katie Reytar and Kai Kresek
Posted on April 20, 2020
Subscribe to the
GFW newsletter

By
Jessica Webb, Katie Reytar and Kai Kresek
Posted on April 20, 2020
Subscribe to the
GFW newsletter

Nearly 500 million people around the world live in and depend on forests, making these groups key to sustainable management of forests. Unfortunately, many local and indigenous communities often struggle with visibility and proper government acknowledgement of this role.

Data from LandMark, recently added to Global Forest Watch (GFW), can help bring the role of communities to the forefront of forest management. This data documents more than 136,000 indigenous and community lands, underscoring their importance for biodiversity conservation and climate change and allowing for deeper insights into the impacts of forest loss within these communities.

Indigenous Peoples are leaders in protecting carbon and biodiversity strongholds

The significance of indigenous and community lands as carbon sinks (approximately 17% of the world’s total aboveground biomass) and biodiversity havens (roughly 16% of the world’s intact forest landscapes) cannot be understated.

Often indigenous territories also overlap with wildlife reserves, as in the case of the Siona people of Ecuador. Located in the northeast Amazonian region, the Cuyabeno Wildlife Reserve was established in 1979 to protect thousands of species including Amazonian river dolphins, manatees, giant anacondas, ten species of monkey and over 580 species of birds. The Siona people’s tenure on the land long predates the reserve, but now many community members participate in the ecotourism industry that has sprung up around it, working as guides, boat drivers and cooks in addition to maintaining their traditional practices.

As pressure for land has increased and environmental law enforcement remains under-resourced, encroachment from illegal loggers and poachers is increasing. The Siona, with support from local NGOs now monitor the reserve for recent deforestation activity and other threats, using the Forest Watcher mobile app and other monitoring technologies.

Legal acknowledgement is critical to protect both forests and rights

Analysis of tree cover loss in Brazil and Peru highlights indigenous communities’ important role as forest stewards, showing that from 2013 to 2018, the percent of total tree cover lost within indigenous and community lands was much lower than the rest of the country. 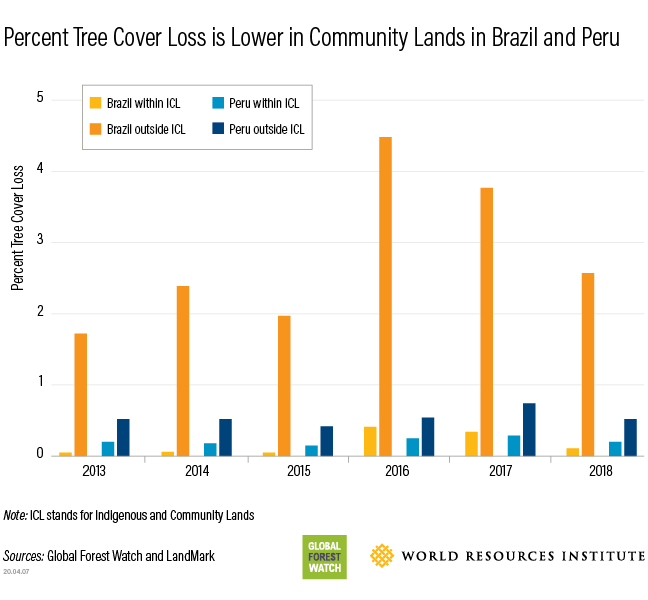 However, lack of legal recognition can jeopardize communities’ abilities to sustainably manage their land. It is estimated that as much as 50% of the world’s land is held by Indigenous Peoples and local communities, but only 10% is legally recognized by governments. According to LandMark data, the percent increase in average tree cover loss between the period 2013 to 2018, was 1.6 times higher globally in lands that were not legally acknowledged. A recent study also showed that secure land tenure for indigenous communities lays a better foundation for conservation and sustainable forest management.

In an effort to acknowledge communities’ rights to make sustainable use of their lands, the government of the Democratic Republic of the Congo signed a decree in 2016 that allocated rights to forest-dependent communities to manage areas of up to 50,000 hectares free of charge. These communities may manage these areas for a range of sustainable uses, such as ecotourism, conservation, small-scale timber extraction, subsistence agriculture, or non-timber forest products. There are now over 60 titled community forests, 34 of which are represented on GFW, the DRC Forest Atlas and Landmark.

Transparent and accurate geospatial data can play a key role in the acknowledgement of indigenous and local communities and their inclusion in forest management decisions.

In the Tupi Monde corridor of Brazil, a 3.5 million hectare strip of forested land on the border of Rondonia and Mato Grosso, an estimated 6,000 indigenous people from the Cinta Larga, Zoró, Paiter Suruí, Arara and Gavião nationalities are attempting to defend their homes from the advancing “arc of deforestation”. The Institute of Conservation and Sustainable Development of the Amazon (IDESAM), has been working with these communities to raise awareness of the threats they are facing by using tree cover loss data, deforestation alerts and satellite imagery to track instances of loss and shed light on what is driving them. Their reports, along with testimonials from Indigenous Peoples affected by the loss, are distributed to government officials and the media in quarterly deforestation bulletins. By presenting satellite-based evidence of how deforestation is impacting their territories the intent is to influence policymakers to strengthen land protections.

Not only can this data raise the visibility of communities in the eyes of government and media, it can also help indigenous communities communicate with each other. In the case of the Siona people, who’s territory was split into three separate lands across Ecuador and Colombia during the rubber boom of the 19th century, this data has facilitated recent efforts to bring their territories closer together culturally and politically. Siona leaders are able to view and understand deforestation trends and threats across all three communities, enabling a more holistic understanding of land use dynamics in their territories and a more coordinated response in advocating for land rights.

The LandMark data is still an incomplete representation of the thousands of local and indigenous communities around the world, currently covering only about 12.4% of the estimated 50% of global land that is collectively held by communities. As the LandMark dataset expands to include more data, it will continue to bolster the voices of these communities with the power of geospatial data.

If you know of additional indigenous or community land maps to add to Landmark and GFW, please contact info@landmarkmap.org BANNER PHOTO:Members of the Siona community test out the Forest Watcher mobile app during a training in Cuyabeno, Ecuador. Jessica Webb/WRI.