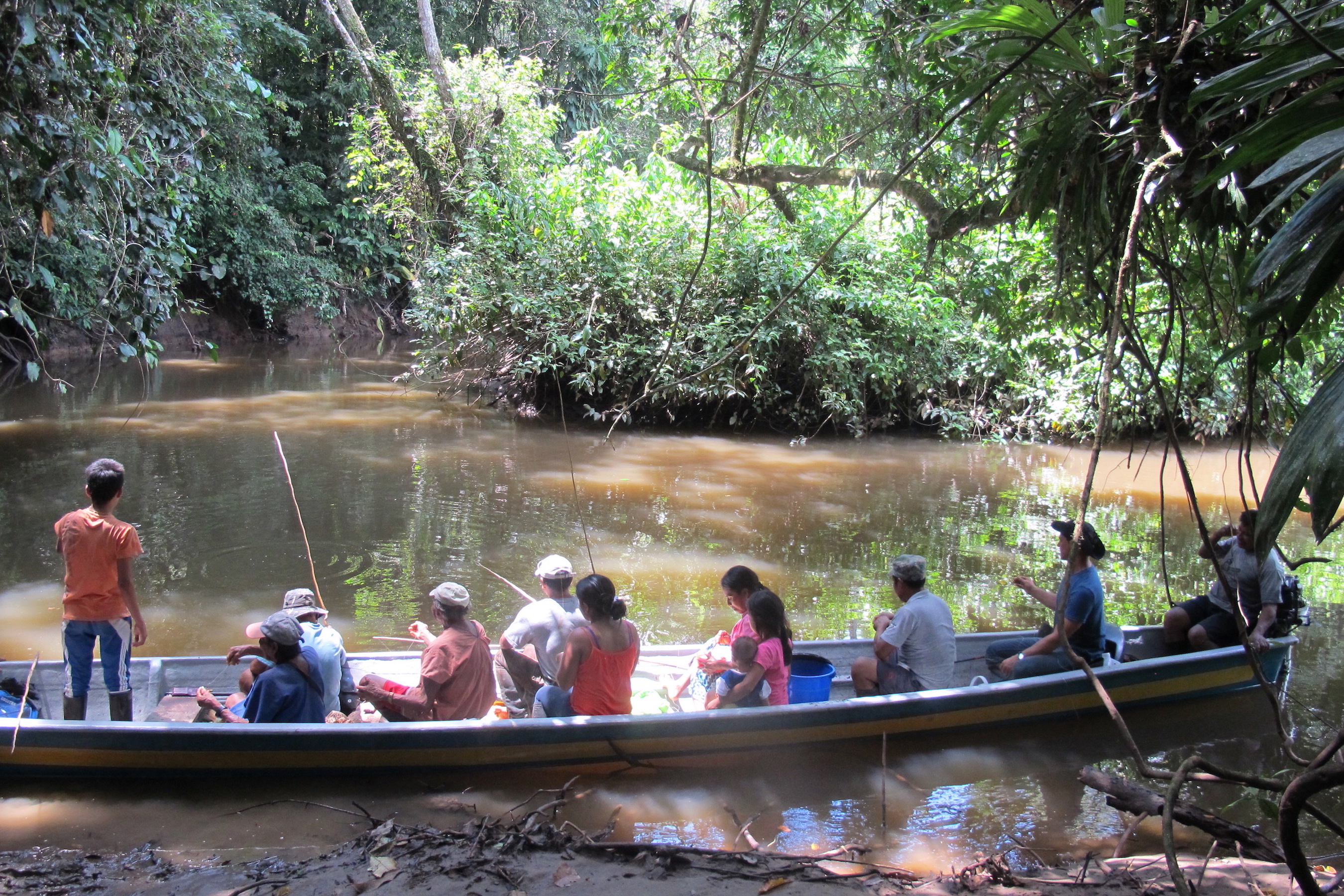 Floating slowly down the shallow Río Kokaya, which forms the southern border of the indigenous Siekopai* territory in the Sucumbíos province of Ecuador, the Siekopai men and women fishing under the hot sun take stock of the threats to the local rivers. As the long canoe maneuveres its way among fallen trees and around shallow river bends, the fishermen and women pointed out an African palm plantation, and further downstream, a recently deforested area where colonos (Spanish for “colonists”) have illegally settled in Siekopai territory to grow coffee and bananas. An oil pipeline runs south of the river, out of sight.

The impact of resource extraction on the Ecuadorian Amazon and the people who depend on its rivers and forests has regularly made the news in recent years, revealing the scale and intensity of environmental destruction in the region. The high-profile Chevron case drew attention to extensive pollution, and a recent Global Forest Watch blog highlighted 87,525 hectares that had been deforested between January 2004 and February 2015. Despite national and international attention, communities on the ground have had astonishingly little access to information about the damages happening all around them, and have often been left out of the debate over remediation and culpability. In response, indigenous communities in Ecuador have turned to environmental monitoring to increase transparency and accountability. Incorporating the lessons learned from monitoring efforts around the world, community groups and their allies in the Sionabai and Siekopai territories have recognized the value of community participation in the process of designing monitoring programs. Their experiences provide several key insights that can be applied to future monitoring projects in Ecuador and beyond.

1.     Concern about impact of environmental contamination on community health is the principal motivation for monitoring.

A Siekopai community leader recently explained that while it is common knowledge that oil drilling and pesticide runoff have made local rivers unfit for drinking and cooking, community members still rely on fish from those rivers as a protein source. For this reason, communities in the area are deeply invested in using monitoring data to understand the accumulation of heavy metals and hydrocarbons in the species of fish they most frequently consume. The Universidad Tecnológica Indoamérica and ClearWater are providing technical support, but the project is driven by community concern and informed by local knowledge.

Identifying the end uses for the data can point to the best-suited methodology. Methods range from using community-developed indicators to scientifically-established physical and chemical analyses. For Siekopai and Sionabai communities, the goal was to use the data to inform local decisions about health and in discussions with government institutions about the contamination. Therefore, they used widely-accepted scientific techniques to collect and analyze samples.

3.     Use of scientific techniques does not necessarily preclude community involvement.

Community members can provide input on critical indicators such as sampling sites, fish species to study and species´ lifecycles, ensuring that the data produced will be directly relevant to local decisions and advocacy. And, when locals are monitoring culturally and economically important natural resources, they are as effective as trained scientists.

4.     Community members are the primary monitors.

One of the most common elements of community monitoring is the participation of local residents in the collection of samples. This is key for building an understanding of scientific processes and ensuring community ownership of the project. In fact, the better community members understand the science behind monitoring methods, the more meaningfully they can interpret and use the data later. Monitoring teams from both Siekopai and Sionabai communities have been trained on how to dissect the fish they catch and prepare samples for analysis. The process of collecting data also creates a dynamic space for new forms of sharing and learning. Out on the Río Kokaya, elders shared their knowledge about the river with members of younger generations as fish flopped in the bottom of the boat. 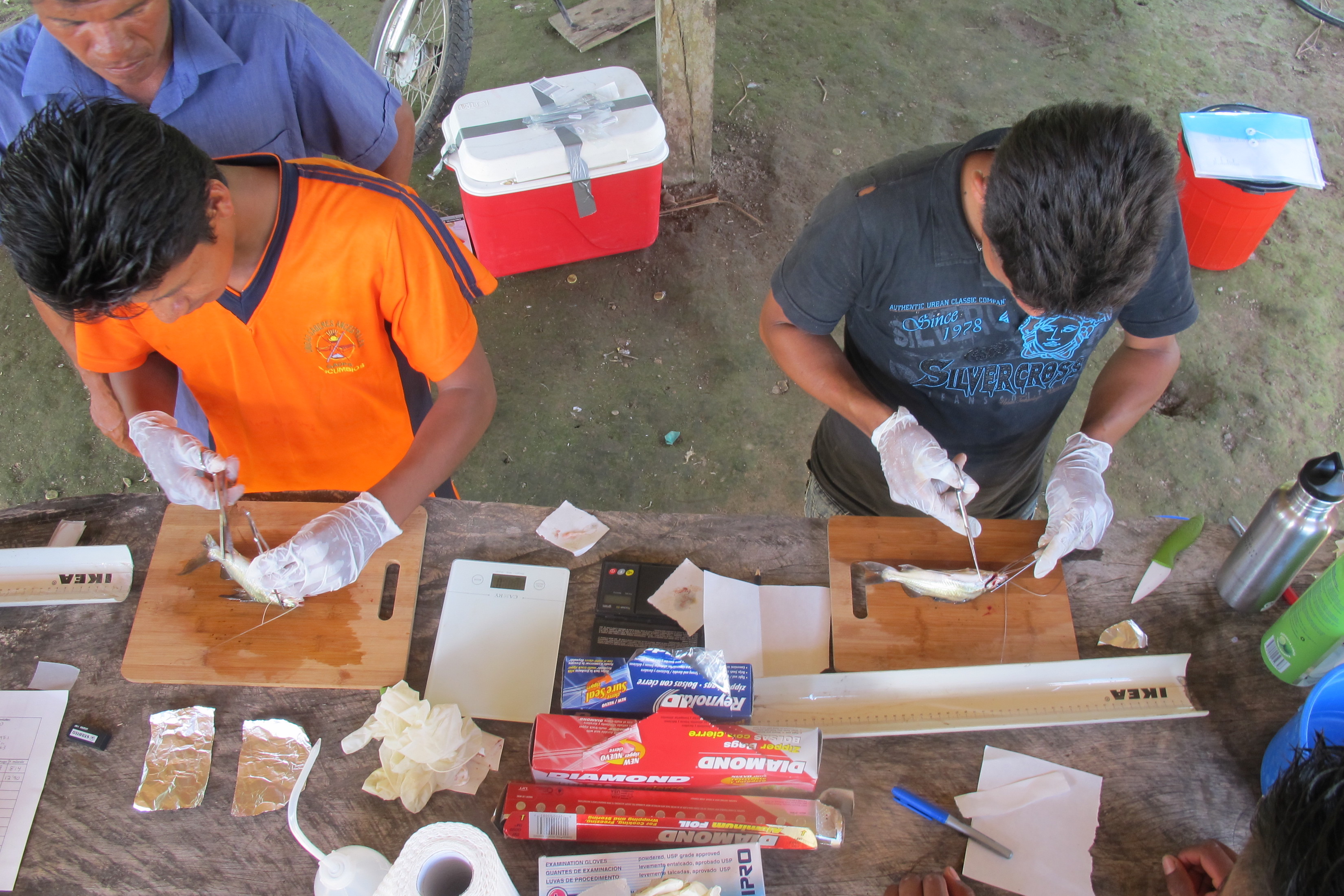 Monitoring data fundamentally empowers those who control it, and, according to WRI analysis, lack of access to environmental information often prevents communities from participating in decision-making and advocacy. To avoid this dynamic, the project is designed such that the university analyzing the data is contractually obligated to send the results directly to the communities, who will have the power to decide with whom to share the data and how to use it. By taking a seat at the table as monitoring projects are being designed, communities and their allies are building initiatives that more effectively address community data needs. In the process, they reaffirm the importance of environmental data as a tool to defend the Ecuadorian Amazon.

Rachel Mulbry previously worked at WRI as a Project Coordinator for The Access Initiative. She currently has a Fulbright grant to research community environmental monitoring in Ecuador. BANNER PHOTO: Members of the Siekopai nationality fish on the Río Kokaya in northeastern Ecuador. Photo by Rachel Mulbry.