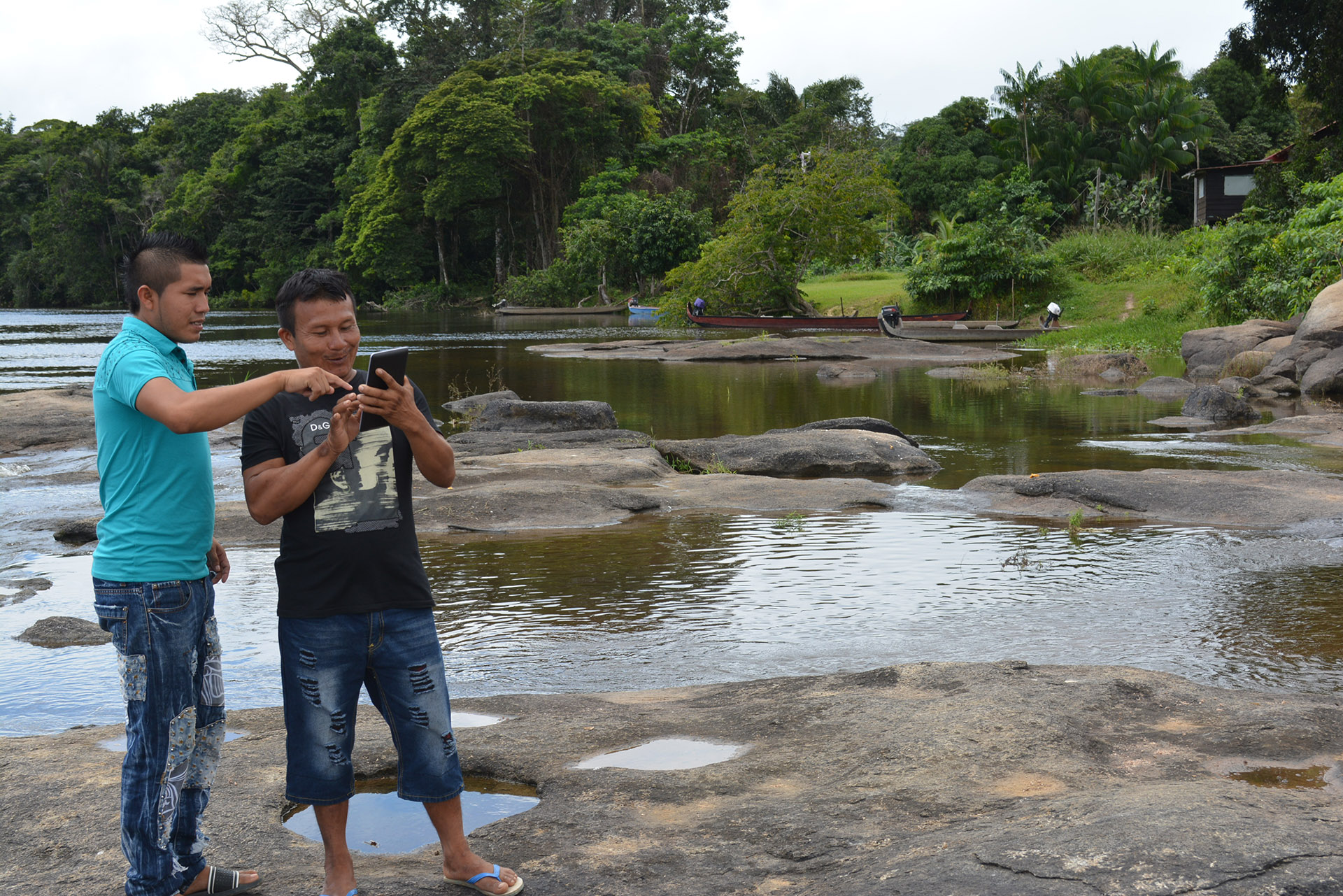 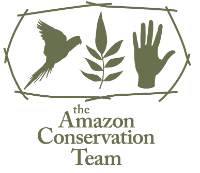 By Rudo Kemper, Amazon Conservation Team In 2016, the Amazon Conservation Team (ACT) received funding from the Small Grants Fund of Global Forest Watch (GFW) to evaluate the drivers of deforestation in threatened Amazonian ecosystems by training local indigenous communities to use the necessary technologies to ground-truth GFW alerts and collect pertinent field data. Doing so has involved undertaking a significant upgrade to our field data collection efforts—and that of our community partners—by introducing Open Data Kit (ODK) smartphone and tablet forms.  The move is a first step towards more active community usage of smartphone data collection applications, such as the new Forest Watcher app developed by GFW and the Jane Goodall Institute, currently in beta stages and compatible with the ODK infrastructure. Applications like ODK are translatable into local languages, and complex forms can be designed targeting specific kinds of data collection. The form can be filled out in an offline context, and when the device is in range of a Wi-Fi or data transmission network, the form will automatically be submitted to a server hosted by ACT. The app is operable on any Android smartphone or tablet device equipped with a GPS unit, meaning that we no longer must purchase dedicated devices for data collection—community members with an Android phone can start right away. For ACT, the emergence of apps like ODK has opened up the possibility of designing customized forms in the local indigenous languages, allowing us and the communities to collect data on land use, natural resource management, cultural and sacred sites, and drivers of deforestation in a streamlined fashion in our program areas in Colombia, Suriname, and Brazil (listen to a podcast about introducing smartphone data collection apps to members of the Brazilian community of Ulupuene here).

In the country of Suriname, we have focused on training our Amazon Conservation Rangers (ACRs; formerly known as Indigenous Park Guards) to utilize the technology. ACRs are skilled villagers who routinely conduct wildlife, natural resource, and environmental threat monitoring expeditions in and around their villages and along the rivers and creeks of the Surinamese rainforest. ACT’s ACR program, founded in 2008, is currently active in four Trio and Wayana villages. 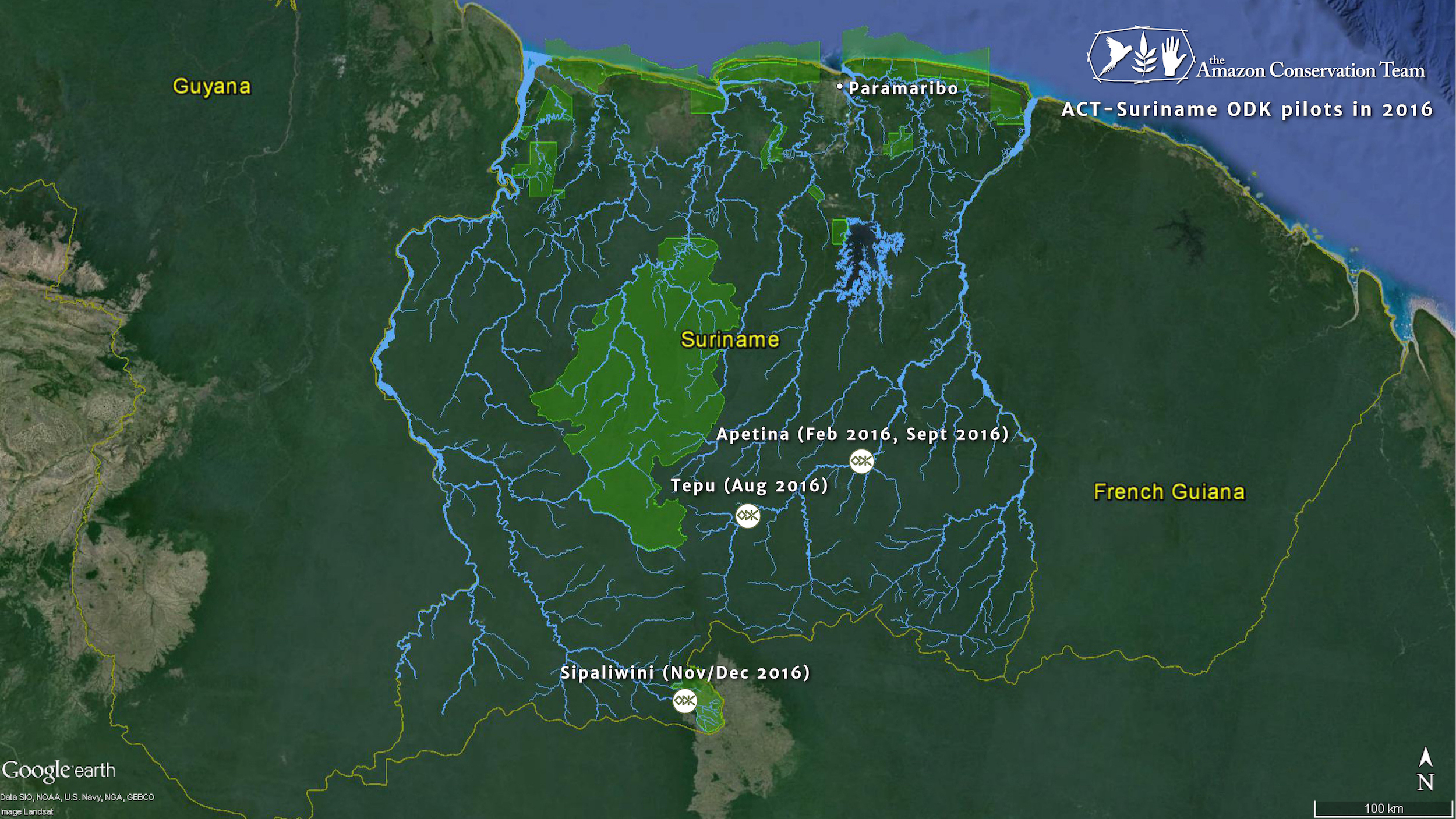 Until now, to collect geographic data, ACRs have been using handheld GPS units and generic paper forms, which has resulted in month-long delays in data transmission, insufficient or incomplete data, and loss of information due to damaged forms or script errors. This year, we began rolling out the ODK and GeoODK apps in Suriname, in anticipation of using Forest Watcher with Global Forest Watch’s near-real time GLAD forest cover loss alerts that will become available for Suriname next year. 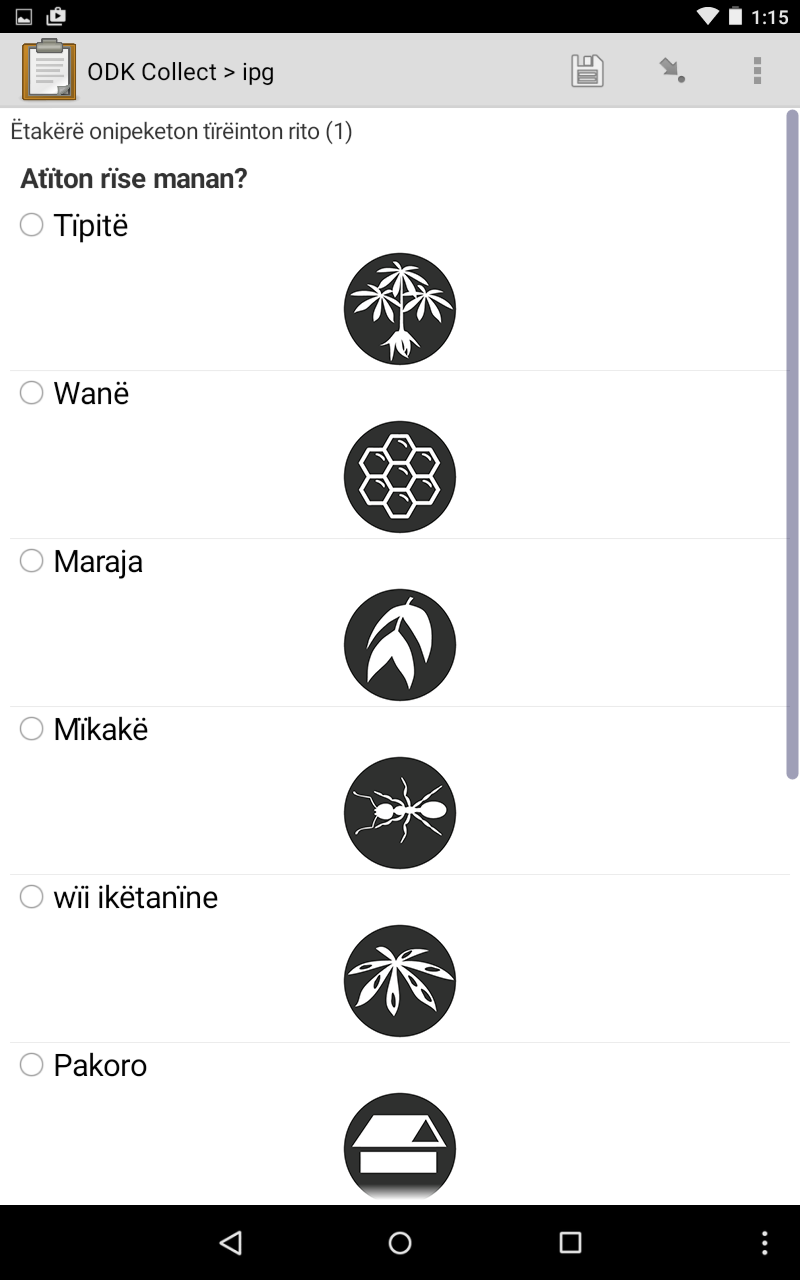 In February 2016, ACT introduced an ODK form to ACRs in the Wayana village of Apetina in southern Suriname. This ODK form was designed with the specific data collection needs of the ACRs in mind, and was translated to both the Trio and Wayana indigenous languages of southern Suriname, as well as the Surinamese lingua franca Sranan Tongo and Dutch and English. The available data categories were features that the ACRs regularly record using GPS handhelds and paper forms, such as important natural resources like the tasi palm used to cover traditional roofs, environmental pressures like leafcutter ants and signs of gold mining activity, and village infrastructure like water taps and buildings. ACT field staff trained the Wayana ACRs in ODK and utilized the technology to conduct village mapping and camera trap placement exercises. The younger ACRs were able to download the application and form directly onto their personal smartphones, eliminating the need to carry specialized equipment. The form was later used in August with the ACRs of the Trio village of Tepu to collect baseline data for an IDB-sponsored project to cultivate locally-grown pepper for small-scale commercial exportation. Following an introductory workshop, Tepu ACRs autonomously collected data on the varieties of pepper grown by the women of Tepu, the quantity of plants, and plant owners, along with photos, together providing sufficient and robust data for the pepper project baseline.

In September 2016, we returned to Apetina to continue the trainings, with a new focus on involving the eight ACRs stationed there at the very beginning of the process: the form design phase. ACT-Suriname’s field station manager for Apetina, Niradj Hanoeman, conducted workshops soliciting input from the ACRs on the kinds of data that are of use to the community, and together with the ACRs brainstormed three substantive Wayana-language forms on waste management—a significant issue for the village, where nonperishable materials from the city have become more commonplace—traditional medicine, and handicraft materials. Leveraging the Wi-Fi connection at ACT’s field station in Apetina, Hanoeman sent this paper-based information to ACT’s technical mapping team, who generated the corresponding ODK forms only hours later. The very next day, the ACRs were able to use the forms that they themselves designed, significantly enhancing both their understanding of and ownership over the data collection process. 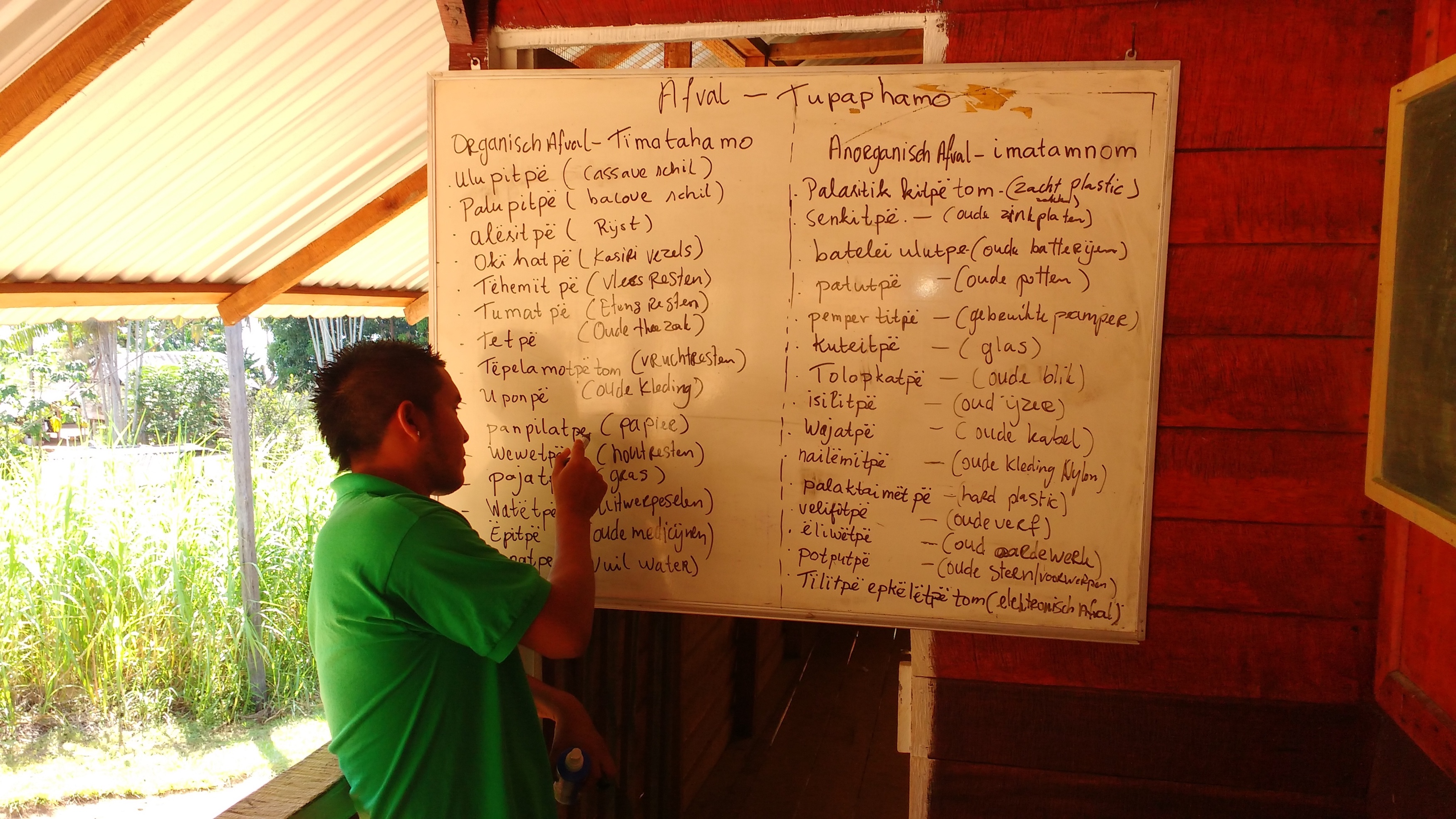 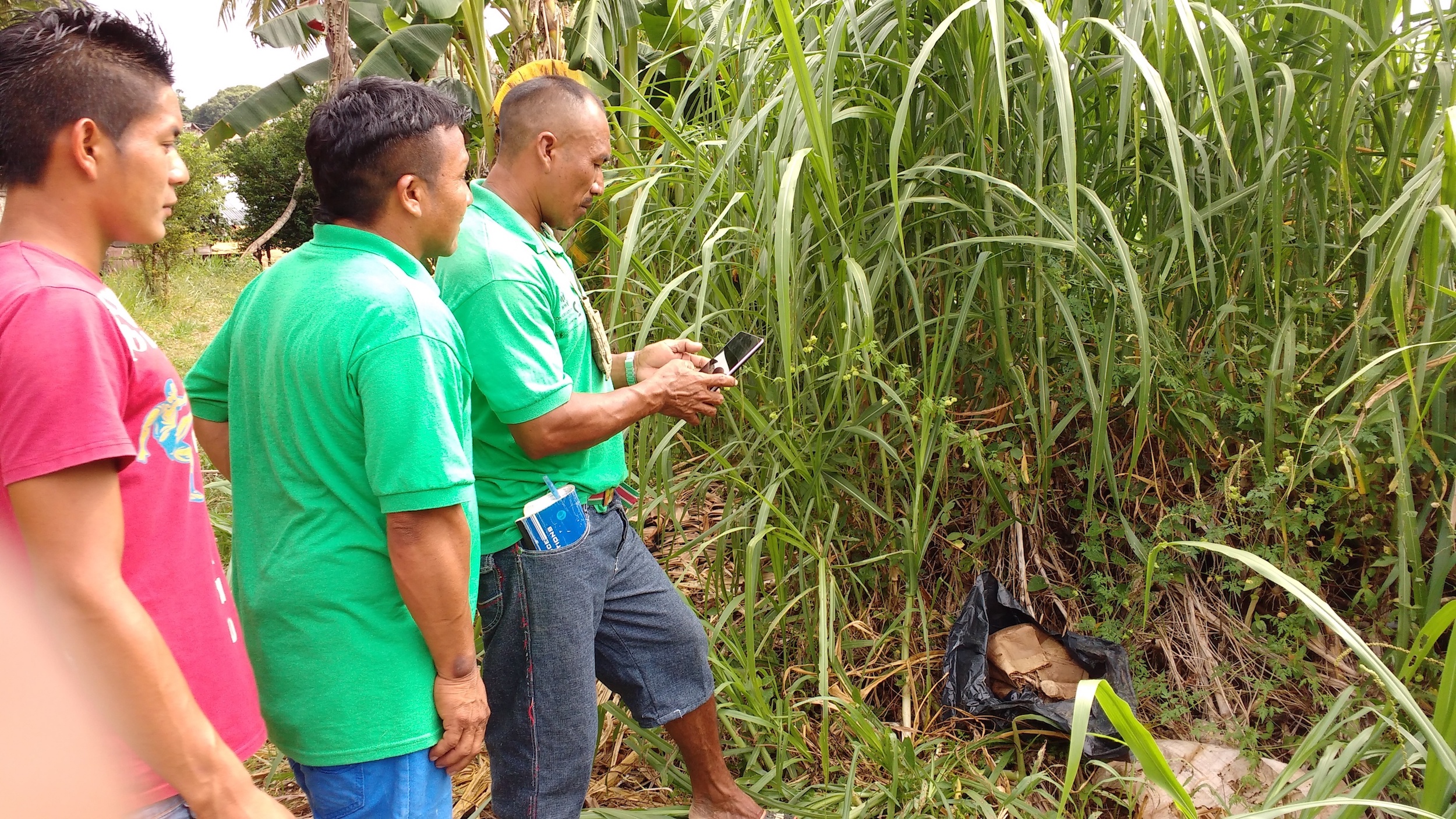 For our final training of the year, we decided to focus on Suriname’s most remote village, the small Trio settlement known as Sipaliwini, which is located approximately 15km from both the southern border with Brazil and the large eponymous savanna. Sipaliwini is one of the only villages in Suriname without electricity or telephone access, providing a challenge for smartphone data collection transfer. Although the offline ODK data aggregation system known as ODK Briefcase was an option, we were able to procure and install an operational solar and Wi-Fi system for the Sipaliwini field station, thanks in part to the Global Forest Watch Small Grants Fund. In November and December of 2016, we traveled to Sipaliwini to give a similar training focusing on the usage of ODK and GeoODK, in addition to participatory form design workshops. This time, we were able to digitize the forms directly in Sipaliwini, only needing to upload the form to our data aggregation server and download it on the relevant smartphone and tablet devices. 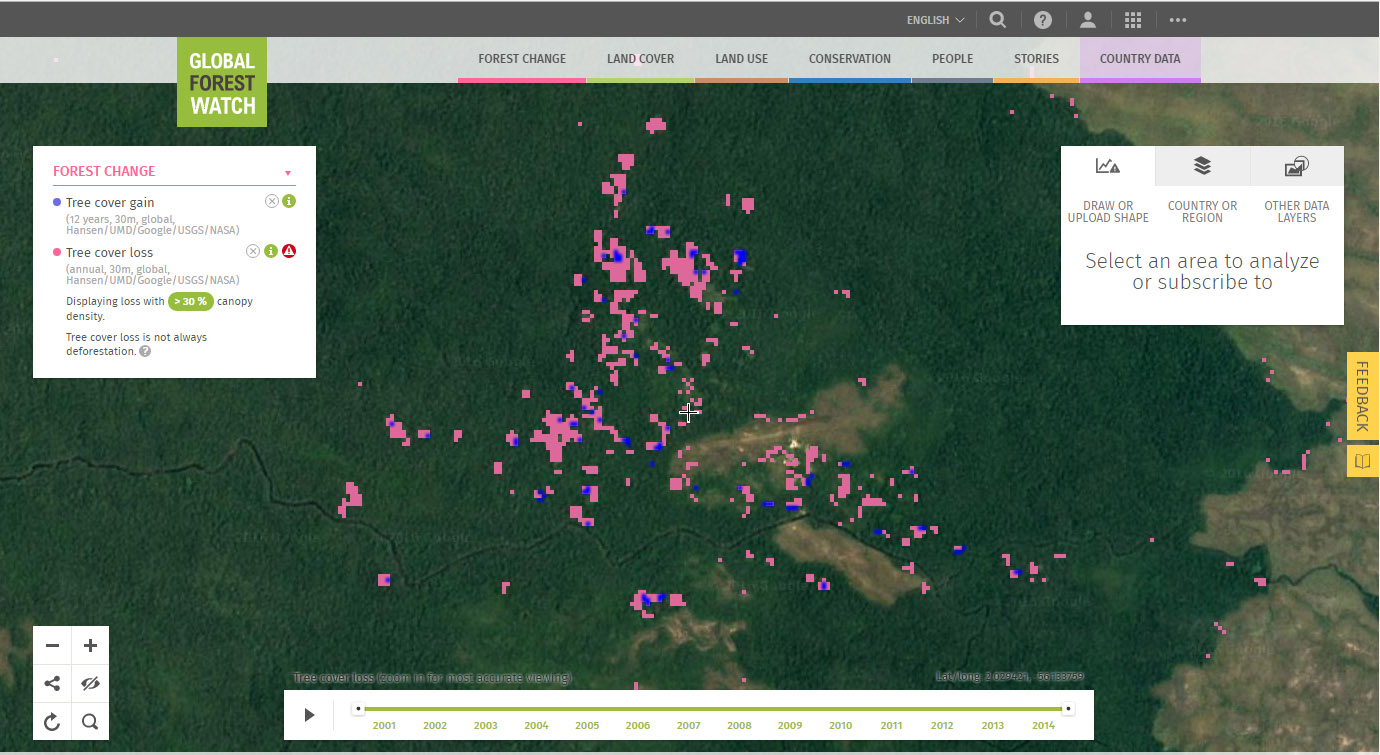 Sipaliwini’s five ACRs stressed the need for data collection on drinking water sources: the village is significantly affected by stationary and low levels of river water during the annual periods of drought, resulting in outbreaks of diarrhea among other illnesses. ACRs have been working with field station manager Roché Bhola to identify alternative drinking water for the community, and the form we designed directly plugged into the process by asking detailed questions about creek turbidity, depth, and mobility. ACRs also crafted Trio-language forms for valuable tree types, cultivation plots, and trails and paths (Sipaliwini is at the center of Trio territory in Suriname and Brazil and is a major travel hub for journeying Trios). As in Apetina, we were able to use the forms right away, greatly facilitating local understanding of this new technology, which shows great promise to help the Sipaliwini community collect invaluable data to improve the local quality of life and health. 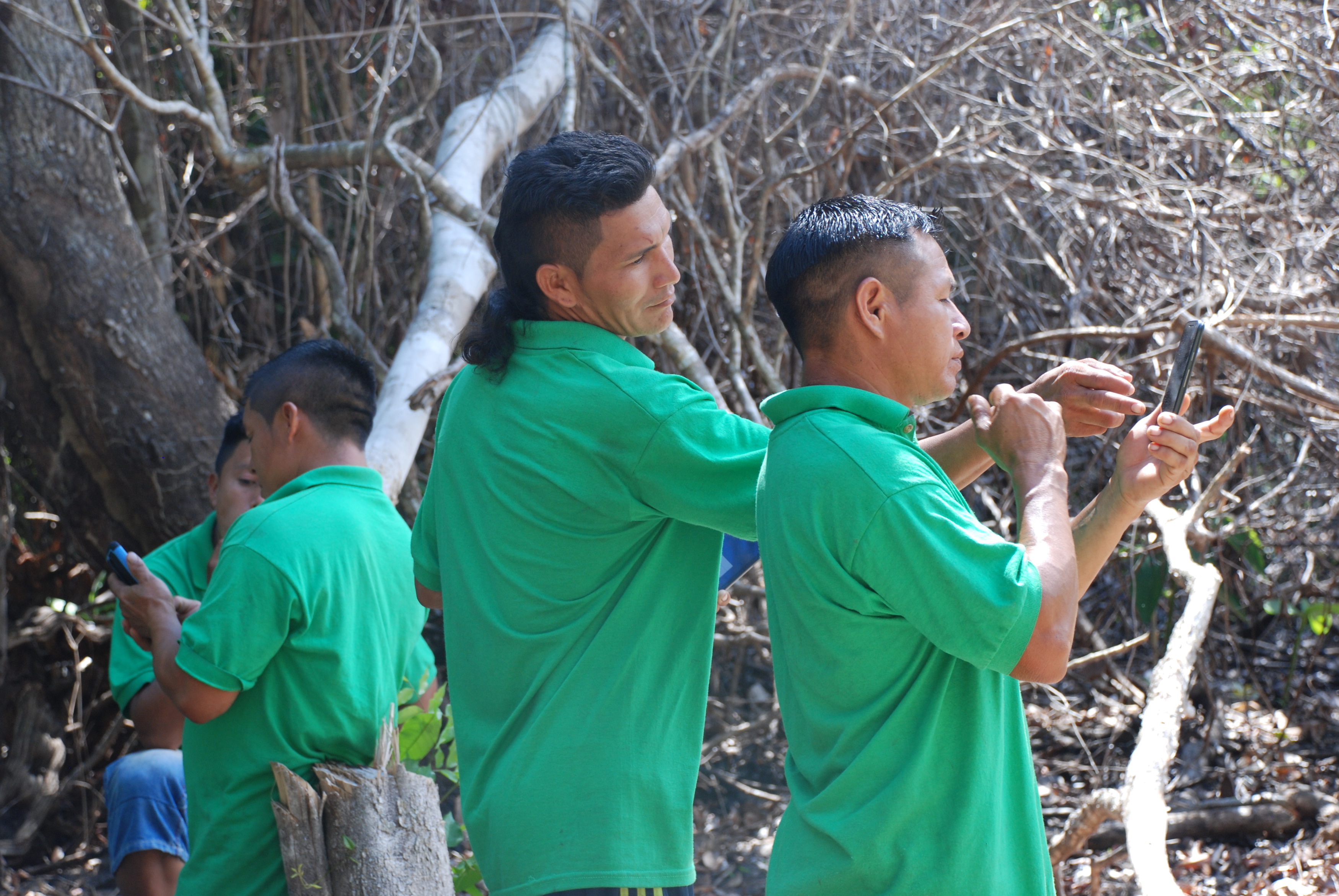 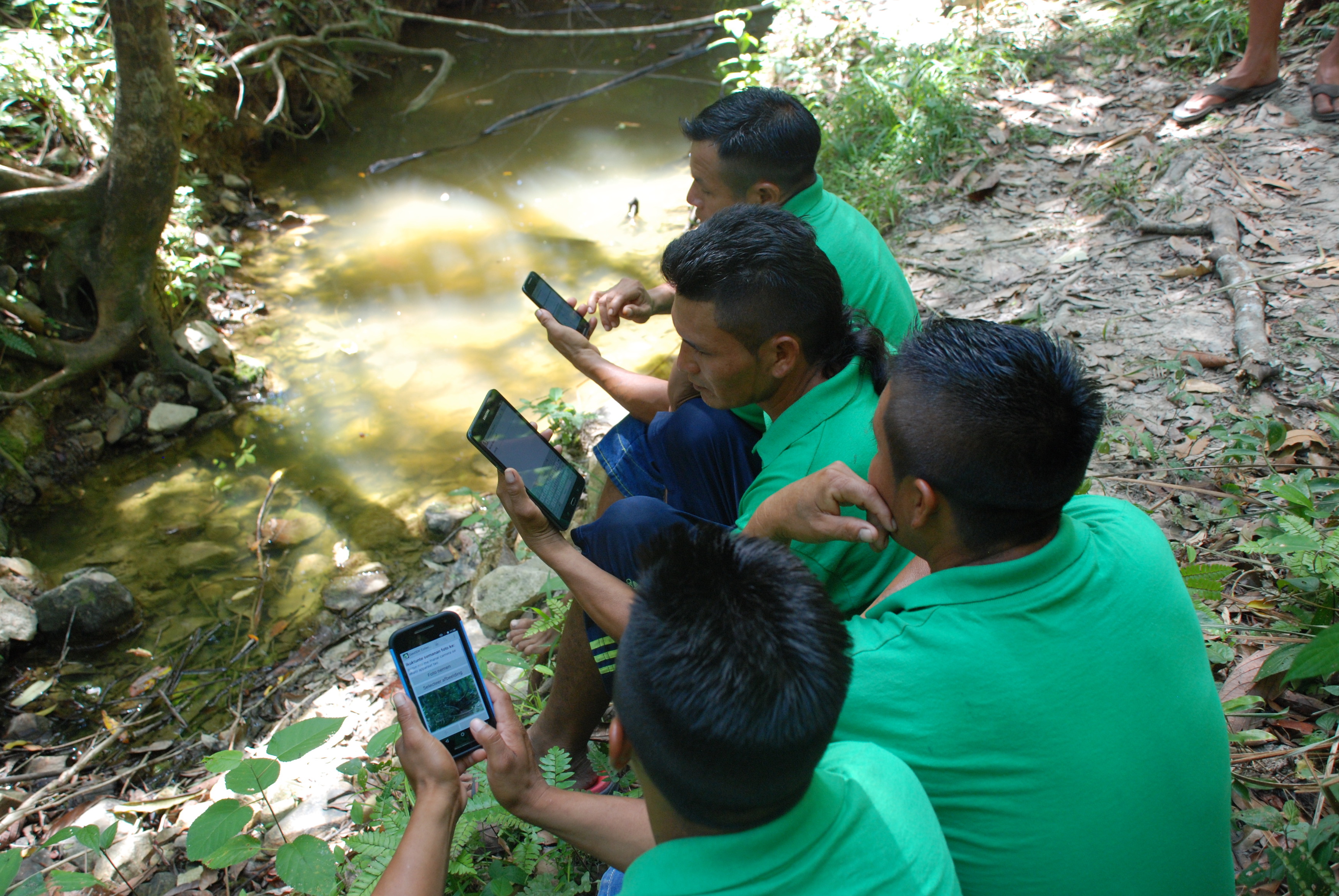 As a final activity of the year, ACT invited teams of ACRs from Tepu and Sipaliwini to demonstrate their skills in working with ODK, using the forms they developed, for an audience of partners and stakeholders working in southern Suriname at a symposium for ACT’s joint project with the University of Utrecht focusing on natural resource management in this region of the country. ACT is grateful and indebted to Global Forest Watch for our receipt of a Small Grants Fund in 2016, and is looking forward to working with the near-real time GLAD alerts and accompanying Forest Watcher app to investigate drivers of deforestation in the near future!