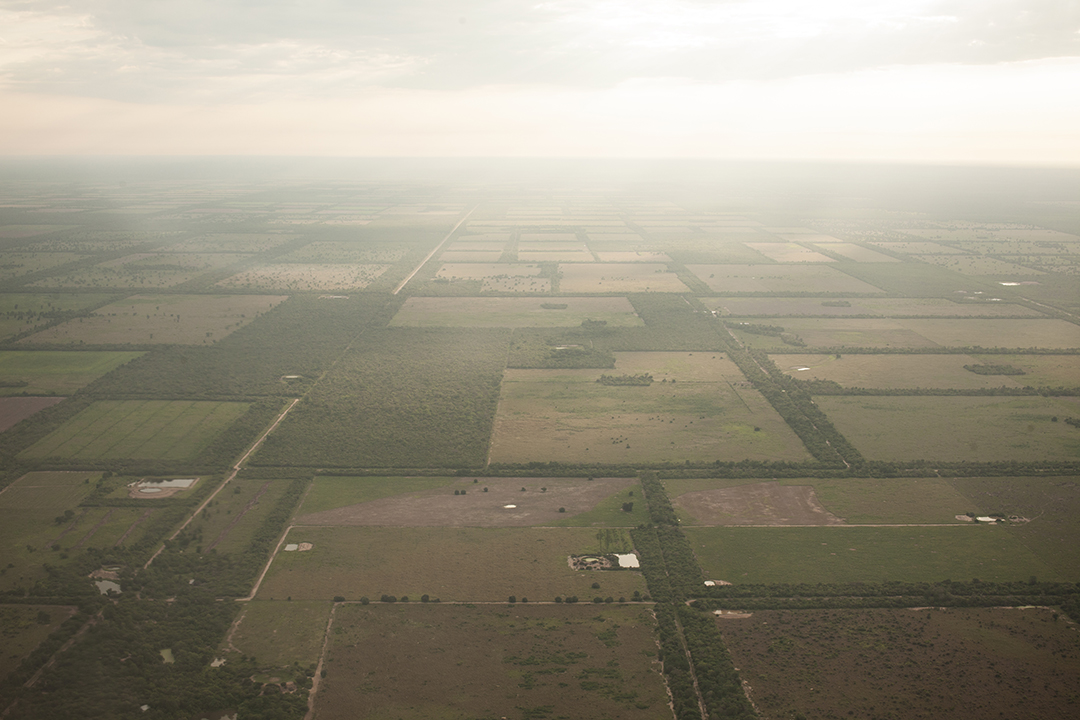 The tropical dry forests of the Gran Chaco region in Paraguay, Argentina, and Bolivia have become a hotspot of deforestation as cattle ranching and soy expand into the area, which also had pushed local indigenous groups out of their ancestral lands. The reach of deforestatin and the uses of land for agribusiness are seen from an airplane near the city of Filadelfia.

By Sarah Ruiz and Ryan SarsfieldApril 4, 2019

Despite its remoteness and low population, the Chaco represents both home and livelihood for those who reside there. But the area has become increasingly threatened in the last 20 years as trees are felled in favor of ranches producing beef for export.

The group is gathered to find out how a cell phone app might be able to help them fight invasion and deforestation on their ancestral lands.

Many in the community grew up living nomadically in the forest and only later settled in Chaidi, some as recently as the early 2000s. Several still have immediate family members — brothers, uncles, mothers — living traditionally in voluntary isolation, managing to avoid contact with settled communities despite the shrinking forest around them. The settled Chaidi community might appear to be unlikely adopters of state-of-the-art satellite data, yet cell phones abound in the community. They are eager to make use of the new application to protect their forests and their nomadic family members.

The meeting in Chaidi has been organized by the Federation for the Self Determination of Indigenous Peoples (FAPI), of which the Ayoreo and other indigenous groups are members. A U.S. team from Global Forest Watch (GFW) and program partners representing Rainforest Foundation U.S. in Peru were invited to present GFW’s forest monitoring mobile app, Forest Watcher. The app was developed specifically to be used offline in a remote community like Chaidi. It delivers weekly deforestation alerts, daily fire alerts and recent satellite imagery, allowing users to detect when trees nearby have been cleared. The hope is that an early warning will enable the community to take action and prevent further clearing.

Rubio Padilla and RFUS representative Wendy Pineda taught participants from Paraguay tips they had learned from using Forest Watcher in Peru, sharing their stories and experiences.
The following day, the group took the tech out into the field to verify a deforestation alert that had registered nearby. They parked along the edge of the road, dust and butterflies rising in the midday sun.

You would think that a clearing would be easy to spot— just look for the horizontal trees—but from the road, the forests appear thick and undisturbed. The pink pixels visible on the app revealed a different story however— the seemingly intact forest alongside the road was just a thin fringe of trees.

A short walk down a trail cut into the brush and the newly equipped forest monitors entered a vast rectangle of mangled tree trunks, branches and upturned earth— the handiwork of highly efficient machinery that can level hectares of forest in a single day.

This particular clearing was created only a few days prior and was all but invisible without the deforestation alerts.

The Gran Chaco extends across Paraguay, Bolivia and northern Argentina, and is the second largest forest on the continent. Though its ecological importance is often overlooked by the Amazon to the north, it is rich in biodiversity. Like the Amazon, Chaco forests are under intense pressure from expanding agriculture. According to GFW data, between 2001 and 2017, Chaco dry forests lost nearly 10 million hectares of tree cover.

Land value in the region has historically been low compared to soy production land in Eastern Paraguay, and the government continues to legally sanction clearing for cattle production. The hidden clearing discovered by the workshop could very well have been legally permitted, but the uncertain legality highlights the need for better information and more transparency of the area. For indigenous people defending the borders of their territory, a map is often the most useful weapon.

Blazing the trail ahead

The group took photos documenting the scene, along with the GPS coordinates and notes. This is combined into a report within Forest Watcher, which can then be used to formally document illegal deforestation and encroachment. The question on everyone’s minds was, “what next?”

Building off Rubio Padilla and Pineda’s experiences in Peru, the group discussed strategies for using the data after it is collected. Often, in both Peru and Paraguay, simply filing a formal complaint with the authorities is not enough to halt further clearing, and while having the ability to work with weekly high-resolution alert data is a huge leap forward, the teams must develop plans to take advantage of the alerts more quickly and effectively.

FAPI continues to work with its Indigenous member organizations to provide workshops elsewhere in Paraguay in the hopes that soon the application will become a familiar and effective tool for Indigenous communities throughout Paraguay. ۞

Federation for the Self Determination of Indigenous Peoples (FAPI), Rainforest Foundation U.S.