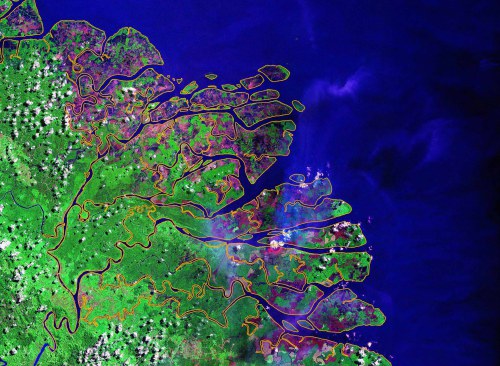 By David Gaveau and Romain Pirard The loss of old-growth tropical forest area through fire and agricultural expansion has for decades challenged many of the sustainability goals set out by policy makers, conservation groups, and forest managers. As part of the solution to halt tropical deforestation, a strong trend has emerged to assign blame – and it’s industrial commodity plantations that are very much scrutinized. Maps showing the boundaries and ownership of land parcels, and the timing and distribution of deforestation and fire events (with satellites), are increasingly combined in online mapping services as a way to improve transparency, traceability and accountability of the corporate sector.

Often, NGOs identify industrial plantations as the principal driver of tropical deforestation, and they have campaigned for consumers to boycott agricultural and timber products from international companies, who are viewed as liable for the actions of their suppliers. To alleviate such concerns and improve their public image, oil palm businesses accused of driving deforestation in Southeast Asia have developed standards through a voluntary certification scheme in collaboration with NGOs; the Round Table on Sustainable Palm Oil (RSPO). The Indonesian and the Malaysian governments have developed their own compulsory standards: the Indonesia Sustainable Palm Oil (ISPO) and the Malaysian Sustainable Palm Oil (MSPO). Other emerging initiatives such as zero-deforestation commitments have been made by key companies producing and/or trading oil palm, and pulp and paper in Indonesia, and soy in Brazil. Important state regulations have also been issued to reduce haze-producing fires, such as Singapore’s recent Trans-boundary Haze Pollution Act (THPA). These are recent examples of companies and governments actively working together to clean up businesses involved in deforestation and fire.

MAPS TO IDENTIFY AND BLAME

All of these initiatives – certification schemes, zero-deforestation, THPA – have a heavy reliance on maps as tools to identify culprits and assign blame. Here, we caution that simple assessments of deforestation or fire events in concessions face significant methodological limitations. This concern is justified by increasing reliance on those methods which are praised for their relatively low costs and suitability for rapid dissemination across large spatial and temporal scales, aided by ‘Big Data’ computer developments. Maps inherently simplify real conditions on the ground. Everybody knows that. Maps are prone to misinterpretations that lead to erroneous conclusions about who is to blame for destroying forests. That can lead to inadequate policies. For example, using satellite imagery and concession maps, one NGO watchdog recently blamed a company for destroying forests in Indonesian Borneo to establish a plantation, and concluded that it failed to comply with its zero-deforestation pledge. The situation on the ground appears to be more complex. The incriminated company was likely never able to develop the land because of opposition from local populations. In this case, detailed field investigations are necessary to identify responsibilities. This is not an isolated case. Many concessions in Indonesia face similar problems over the control of their boundaries. It can hardly be inferred from the mapping of deforestation and fire events in concessions that any given company is responsible for the problem, as other land users clear land inside concessions for their own purposes -usually to sustain their livelihoods. Conversely, deforestation in concessions should not be the sole focus when monitoring a company’s corporate responsibility, as industry-driven deforestation can certainly occuroutside formal concession boundaries and displace communities to marginal lands.  We must strive to distinguish good practice from bad.

The notion that land clearing in one place is done by someone other than the owners of the land is hardly novel. Indeed anyone who spends significant time investigating land claims and property rights has noticed this sort of overlap. Land use and land tenure in Indonesia is governed by a tangle of national, provincial, and customary laws that often compete with each other, resulting in confusion over who owns which bit of land. This situation is exacerbated by an influx of land-seeking migrants and by investments in agricultural expansion by mid-level investors of unknown origin. Tensions — and occasionally conflict — can arise among these land users. Despite that, we still find reliance on simple analyses that fail to capture this complexity. The problem is not only one of accuracy and therefore fairness in assigning blame, but that the data is influential and might produce misinformed policies with bad consequences for sustainable forest management. We do not aim to give a blank check to companies or to blame rural populations for the disappearance of natural forests in Indonesia’s concessions. There are many examples where companies have cleared vast expanses of old-growth forest area and abuse of community rights is well documented. However, we see positive signals and potential in recent “zero-deforestation” initiatives to rid supply-chains of deforestation and fire and improve social safeguards. By confusing good and bad practices, there is little incentive for the representatives of the private sector to engage in ambitious plans to change their practices. This is precisely the risk that is carried by a strict reliance on simple remote-sensing analyses for monitoring. Despite limitations, cadastral maps, satellites, and online mapping services will continue to inform the ways in which decision-makers and NGO watchdogs conduct environmental protection.

IT’S COMPLEX ON THE GROUND

The challenge is in capturing the on-ground complexities by combining smart maps with field investigations – in essence by advancing our cartographic skills, and mixing them with traditional field approaches. Satellite imagery can, under many circumstances, assess the cause and purpose of forest area change inside and outside concessions and indicate conversion by companies or by communities. More detailed concession maps should also be made available, which means there must be willingness to engage and collaborate between public and private sectors. Complex fire propagation and deforestation trajectory maps using time-series LANDSATand MODIS daily data should also be incorporated. Maps should be a starting point not the unique and final source of information. Smart mapping is an avenue of research that the Center for International Forestry Research (CIFOR) is addressing. It will have applications not only for fire and haze but also for zero-deforestation pledges and ultimately for the much-needed conservation of natural forests. David Gaveau and Romain Pirard are scientists at CIFOR. For further information about CIFOR’s work in smart mapping please contact: d.gaveau@cgiar.org or r.pirard@cgiar.org

This blog post was cross-posted from Forests News, a blog by the Center for International Forestry Research. Read the original here. BANNER PHOTO: Satellite image of Borneo coastline. Is satellite imagery the best way to make thorough assessments of what is happening on the ground? Photo courtesy of Landsat, via CIFOR.