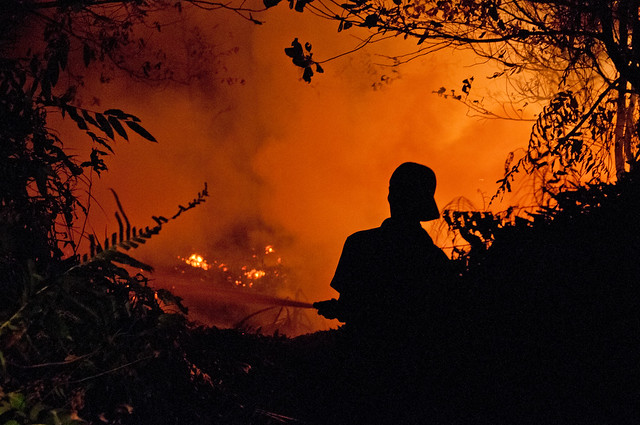 Firefighters fight the fire at night. Outside Palangka Raya, Central Kalimantan. Photo by Aulia Erlangga/CIFOR cifor.org blog.cifor.org If you use one of our photos, please credit it accordingly and let us know. You can reach us through our Flickr account or at: cifor-mediainfo@cgiar.org and m.edliadi@cgiar.org

By
Colton Naval and Sarah Ruiz
Posted on July 17, 2019
Subscribe to the
GFW newsletter

By
Colton Naval and Sarah Ruiz
Posted on July 17, 2019
Subscribe to the
GFW newsletter

In a small village in Riau, Indonesia, community leaders have detected a fire. According to active fires alerts on Global Forest Watch (GFW) Fires, there is one burning on a nearby peatland. With the current wind patterns, the village could soon be shrouded in a thick, toxic smog.

But the alert has given the community chair enough time to act. After verifying the alert with the regional disaster management agency, she relays the information to village residents. With a quick WhatsApp message, the community now knows the location and extent of the burning and can take necessary precautions. Within a few hours, residents have evacuated to a pre-determined “safe space” to wait out the haze.

For the Women Research Institute (WRI), this is the best-case scenario in a province that is under near-constant threat of forest and peatland fires. WRI has been working in Indonesia to build the capacity of local communities since 2002. In 2015, WRI became one of GFW’s Small Grants Fund Recipients. Last year they undertook a project to develop community-based early warning systems like the one described above, across Riau.

Coordinating information dissemination, even through small communities, presents challenges. To address this, WRI hosted focus group discussions with a few towns to figure out what the most effective system might look like. They began by asking what they thought were simple questions about how the communities handle fire and haze events. But in these conversations, WRI found the biggest challenge to creating an early warning system was at a much more preliminary level.

“We identified that there were a great number of people who were unaware and uninformed about forest conditions and forest fires in their neighboring areas, as well as the impact of haze,” says Benita Nastami, a Program Officer and Researcher at WRI.

Based on this finding, the WRI team identified education on fire and fire-related hazards as a critical first step in preparing communities. So WRI focused on producing educational media that would inform communities about the dangers of forest and peatland fires, and the health impacts of the resulting haze.

The media they produced had to be simple and easy to understand for any member of the community. Based on direct feedback from their focus group discussions, WRI decided to use two visual mediums: an explanatory video and an educational comic strip. 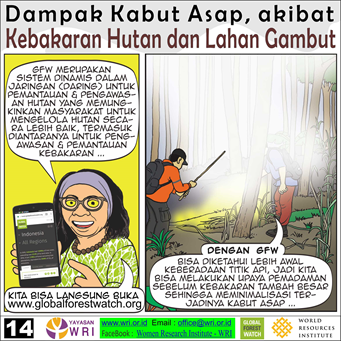 The simple, colorful drawings in the video and comics allowed WRI to deliver information visually as well as verbally, making the content more accessible to a broader audience within the community. They also presented an opportunity to increase communities’ sensitivities to gender by showing women taking an active role in the early warning system.

The comics follow a few characters that represent community members, as they discuss the economic, environmental and health hazards of fires. As one character explains, the others listen and begin to wonder how they can help. The drawings illustrate burning fires, the impacts of smoke inhalation and how GFW can be used to quickly detect fires so authorities can respond and communities can take necessary precautions.

The comics highlighted the importance of protecting at-risk groups during a fire event. Pregnant women are particularly vulnerable, with many suffering pregnancy disorders and miscarriages during periods of severe haze. Additionally, people with disabilities often have issues accessing designated safety areas.

Nastami notes, these “groups are often constrained by the great distances when accessing the safe spaces” away from haze and fire. The comics advocate for safe spaces to be set up in more central areas, like town meeting halls, that allow more residents to quickly access them.

After disseminating the comics, WRI noticed an increase in public awareness and community resilience in Riau. For Nastami, the best moment of the project was the enthusiastic response.

“The community…realized their important role to start initiatives and advocate for more sustainable forest and land management.”

As communities in Riau become better informed about the true cost of forest and peatland fires, WRI will now get to work facilitating the set-up of early warning systems and training community members to use GFW Fires. With these systems in place WRI hopes that communities across Riau will be able to respond more quickly and keep their residents safer when fires are sparked.