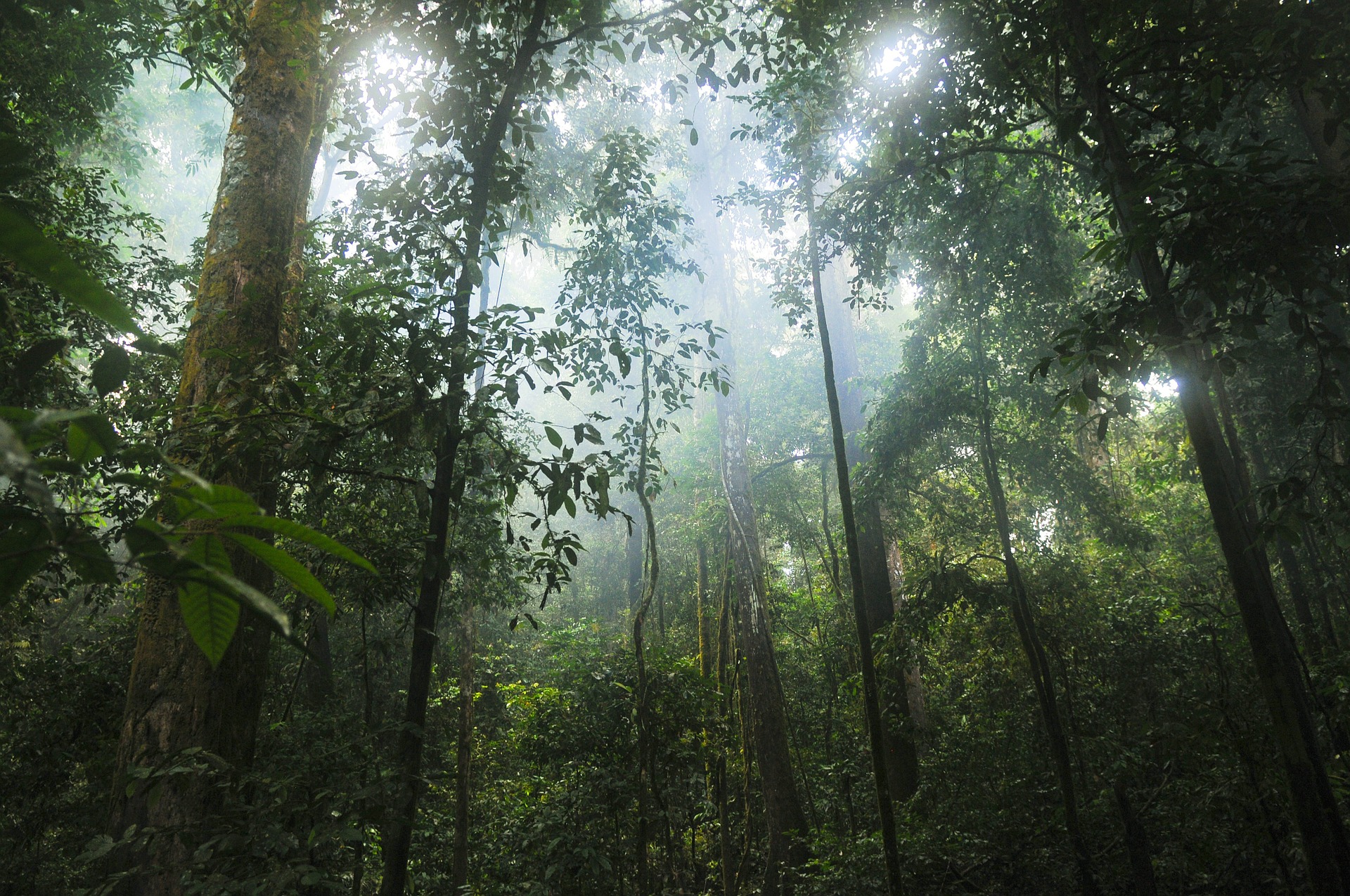 The tropics lost 12 million hectares of tree cover in 2018, the fourth-highest annual loss since record-keeping began in 2001. Of greatest concern is the disappearance of 3.6 million hectares of primary rainforest, an area the size of Belgium. The figures come from updated data from the University of Maryland, released today on Global Forest Watch.

Old growth, or “primary” tropical rainforests are a crucially important forest ecosystem, containing trees that can be hundreds or even thousands of years old. They store more carbon than other forests and are irreplaceable when it comes to sustaining biodiversity. Primary rainforests provide habitat for animals ranging from orangutans and mountain gorillas to jaguars and tigers. Once these forests are cut down, they may never return to their original state.

For the first time, new data on the location of primary forests can help distinguish loss of these important forests from other tree cover loss (read more about the data here). The data reveal that despite a growing number of zero-deforestation commitments from governments and companies, primary rainforest loss hit record-highs in 2016 and 2017 due to fires and remained above historical levels in 2018. 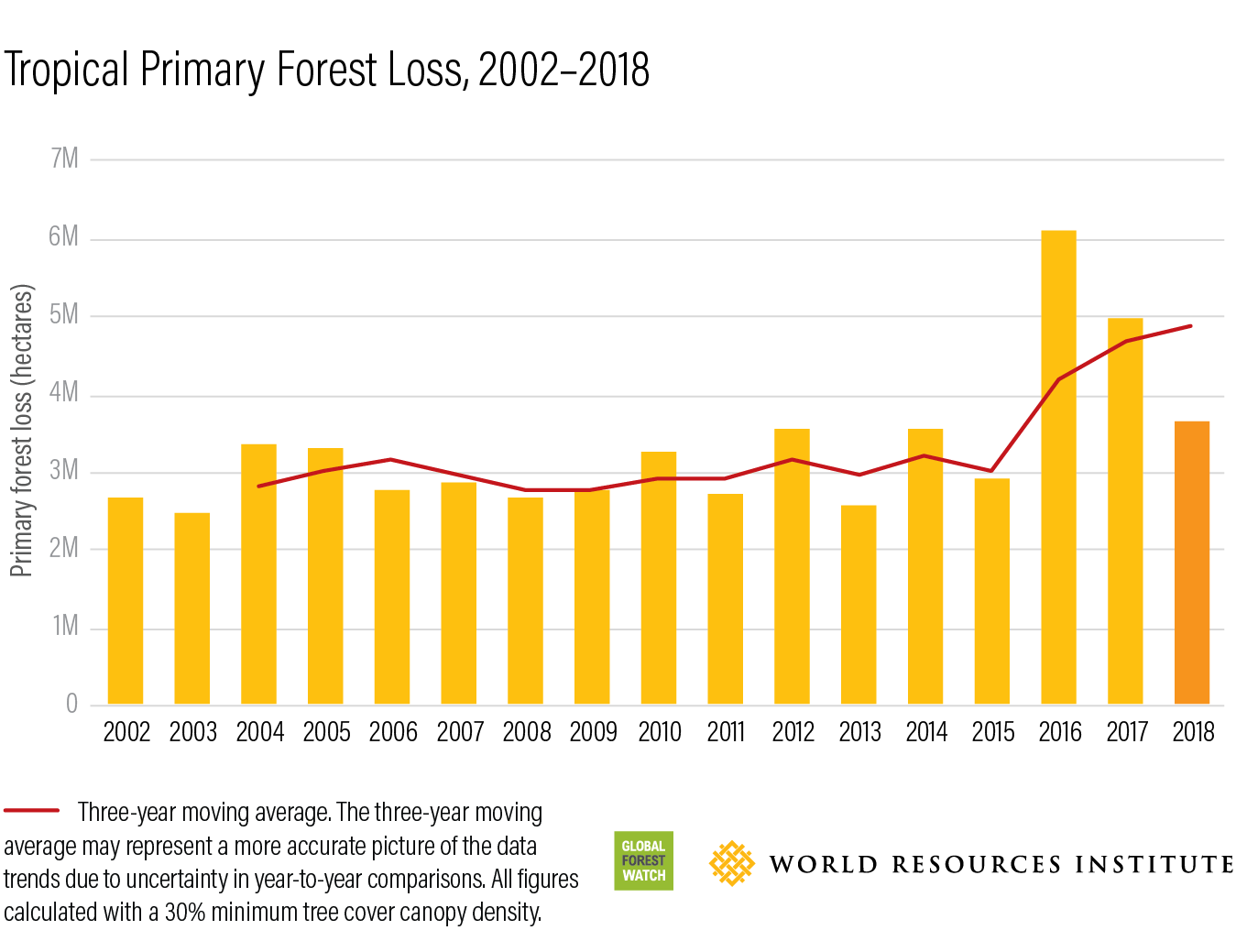 The loss of primary rainforests looks different across regions—including what’s driving it, where it’s happening and its impact. Here’s a deeper look at the trends:

Which Countries Are Losing the Most Primary Rainforest?

In 2002, just two countries—Brazil and Indonesia—made up 71 percent of tropical primary forest loss. More recent data shows that the frontiers of primary forest loss are starting to shift. Brazil and Indonesia only accounted for 46 percent of primary rainforest loss in 2018, while countries like Colombia, Côte d’Ivoire, Ghana and Democratic Republic of the Congo saw loss rates rise considerably. 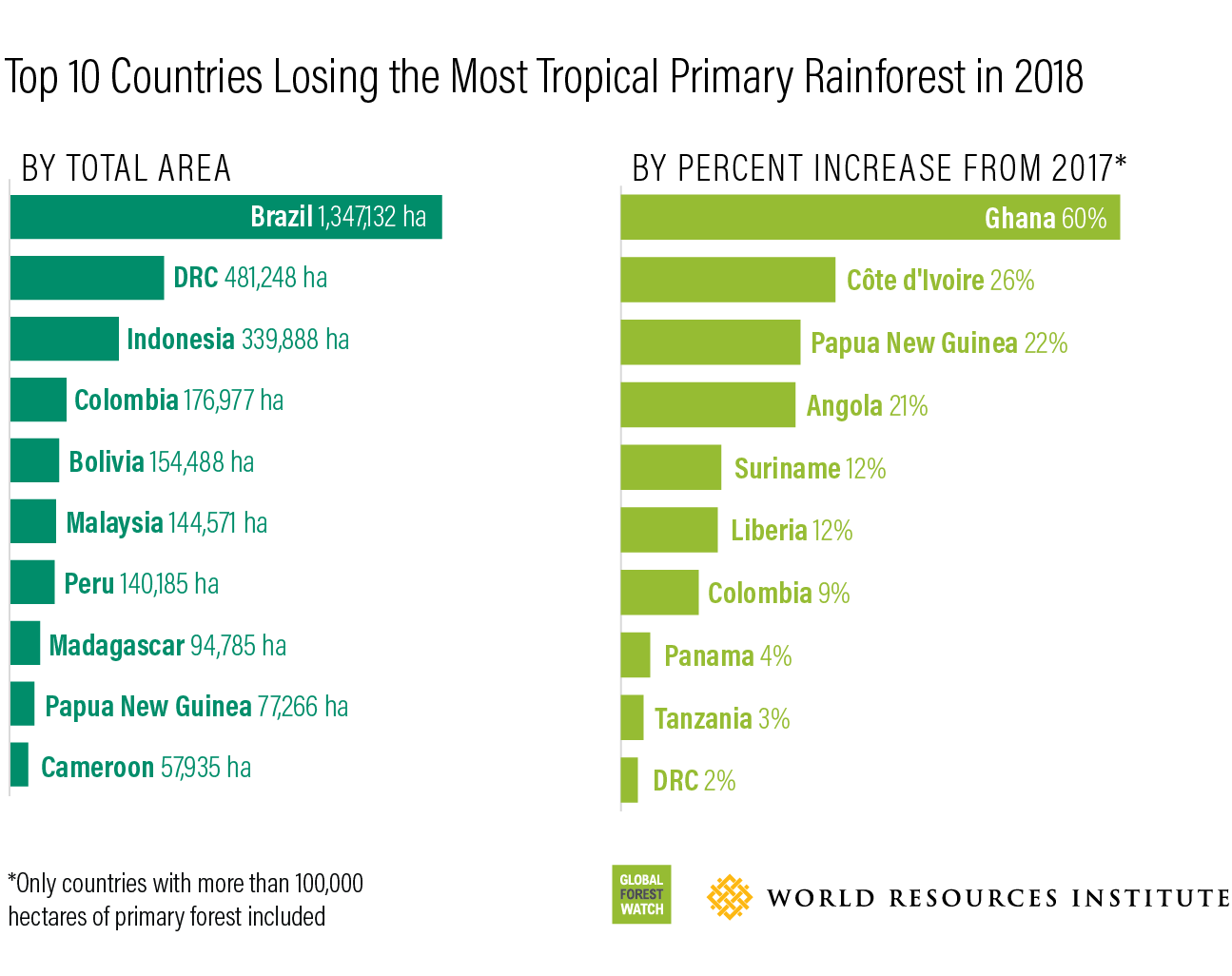 Primary forest loss in Indonesia dropped to its lowest rate since 2003 last year, continuing a hopeful decline that started in 2017. Primary forest loss was 40 percent lower in 2018 than the average annual rate of loss from 2002-2016. 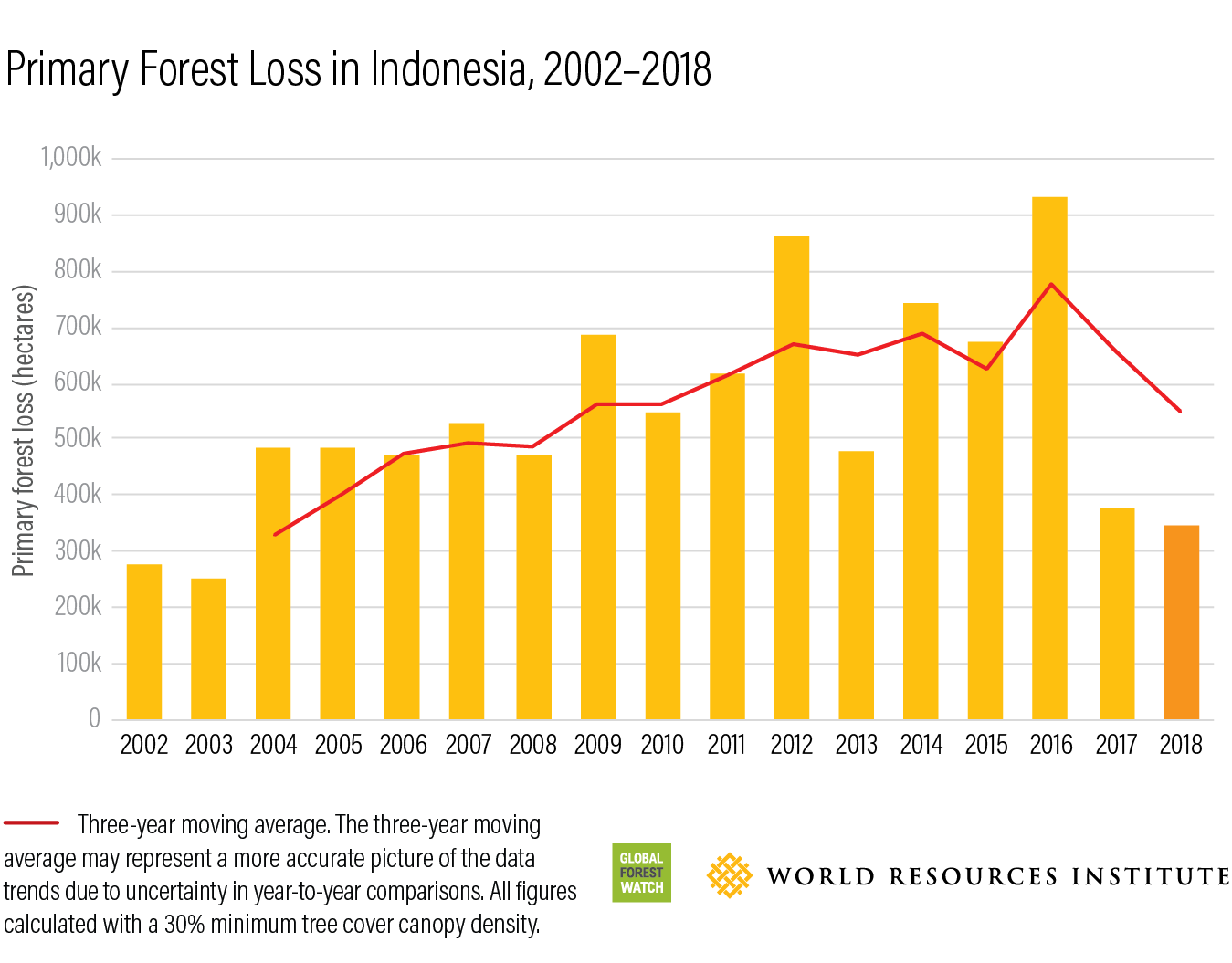 The country saw an even more dramatic decline in forest loss in protected forests, suggesting that recent government policies are working. On peatlands deeper than 3 meters, which have been legally protected from development since 2016, forest loss dropped 80 percent from the 2002-2016 average. And in areas under Indonesia’s forest moratorium, primary forest loss dropped 45 percent in 2018 compared to 2002-2016.

The country is already seeing financial benefits from this decline. In February, Norway announced it will compensate Indonesia for reducing its deforestation-related emissions as part of a climate and forest partnership the two countries signed in 2010.

Though the decline in primary forest loss over the past two years is promising, the fight against deforestation is far from over. The last two years were relatively wet in the country, preventing a strong fire season like the one that burned 2.6 million hectares in 2015. This year will be another El Niño year (albeit weaker than 2015-2016), which generally leads to dry conditions and a prolonged fire season in Indonesia. The province of Riau has already seen more than 1,000 hectares burned in 2019 due to a heatwave, and the government is bracing for more.

Brazil’s primary forest loss in 2018 was lower than its 2016-2017 fire-related spike, but still more than it was from 2007-2015, when the country had reduced its deforestation rate by 70 percent. PRODES, Brazil’s official monitoring system for the Amazon, has similarly showed an upward trend in deforestation since 2012 (read more about the difference in these two data sets here).

Though some of the 2018 loss can be attributed to fire, most of it appears to be due to clear cutting in the Amazon, putting at risk the declines in deforestation the country achieved in the early 2000s. 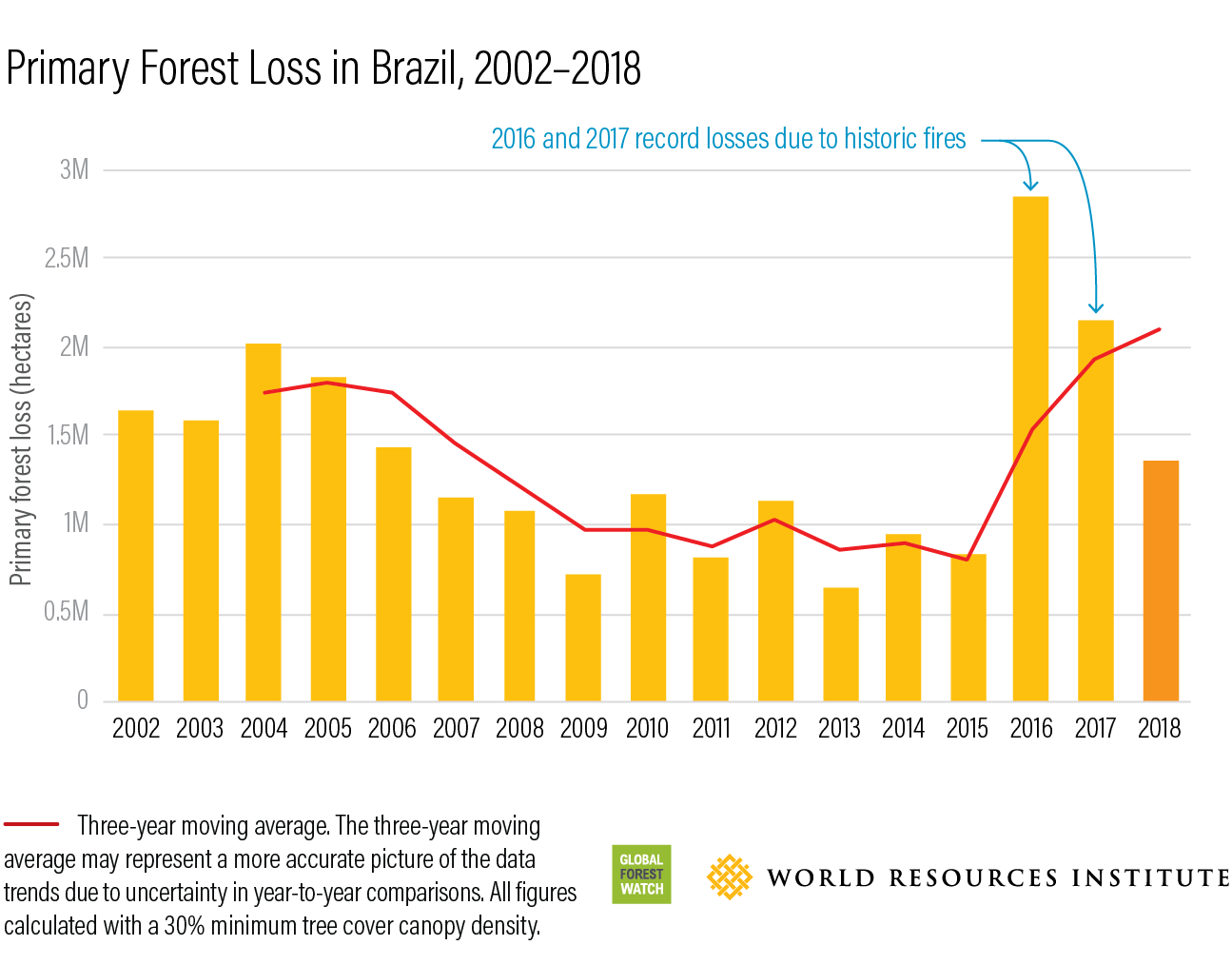 Notably, several hot spots of primary forest loss occurred near and within indigenous territories. For example, the Ituna Itata reserve saw more than 4,000 hectares of illegal clearing within its borders in the first half of 2018, more than double the total loss from 2002-2017. The reserve is home to some of the world’s last remaining uncontacted peoples who depend on the forest for survival and have conserved it for centuries. 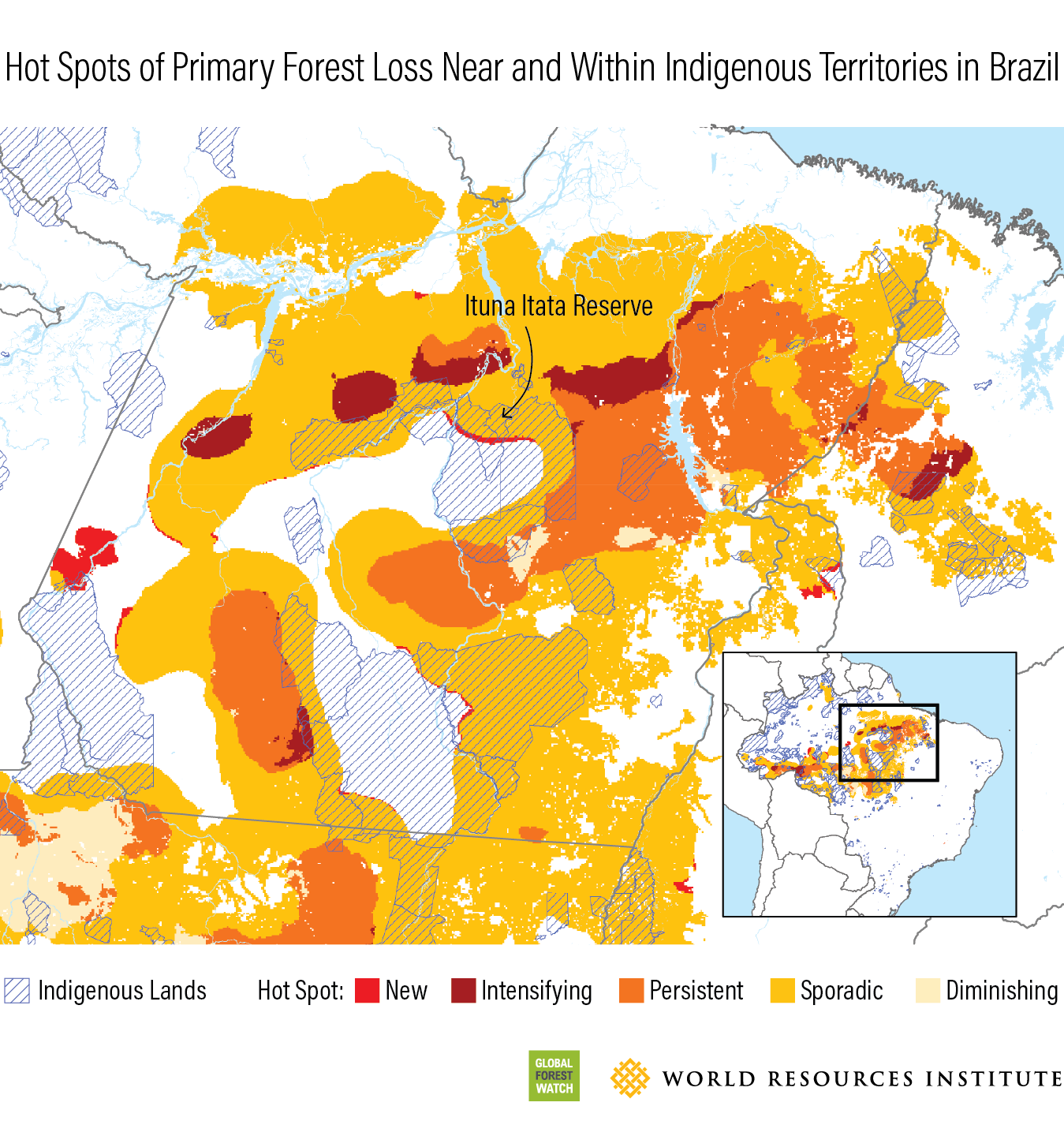 It’s still too early to assess how the weakening of environmental laws and enforcement under Brazil’s new administration will impact forest loss. The high rate of primary forest loss in 2018 occurred before President Bolsonaro took office (though there is evidence of deforestation rates spiking during the election season)— we’ll have to wait until next year’s data for more insights.

Though Brazil experienced a decline in deforestation in the early 2000s, this has not been true in other parts of South America. Colombia, Bolivia and Peru all experienced rising rates of primary forest loss since the turn of the century, though with quite different drivers. 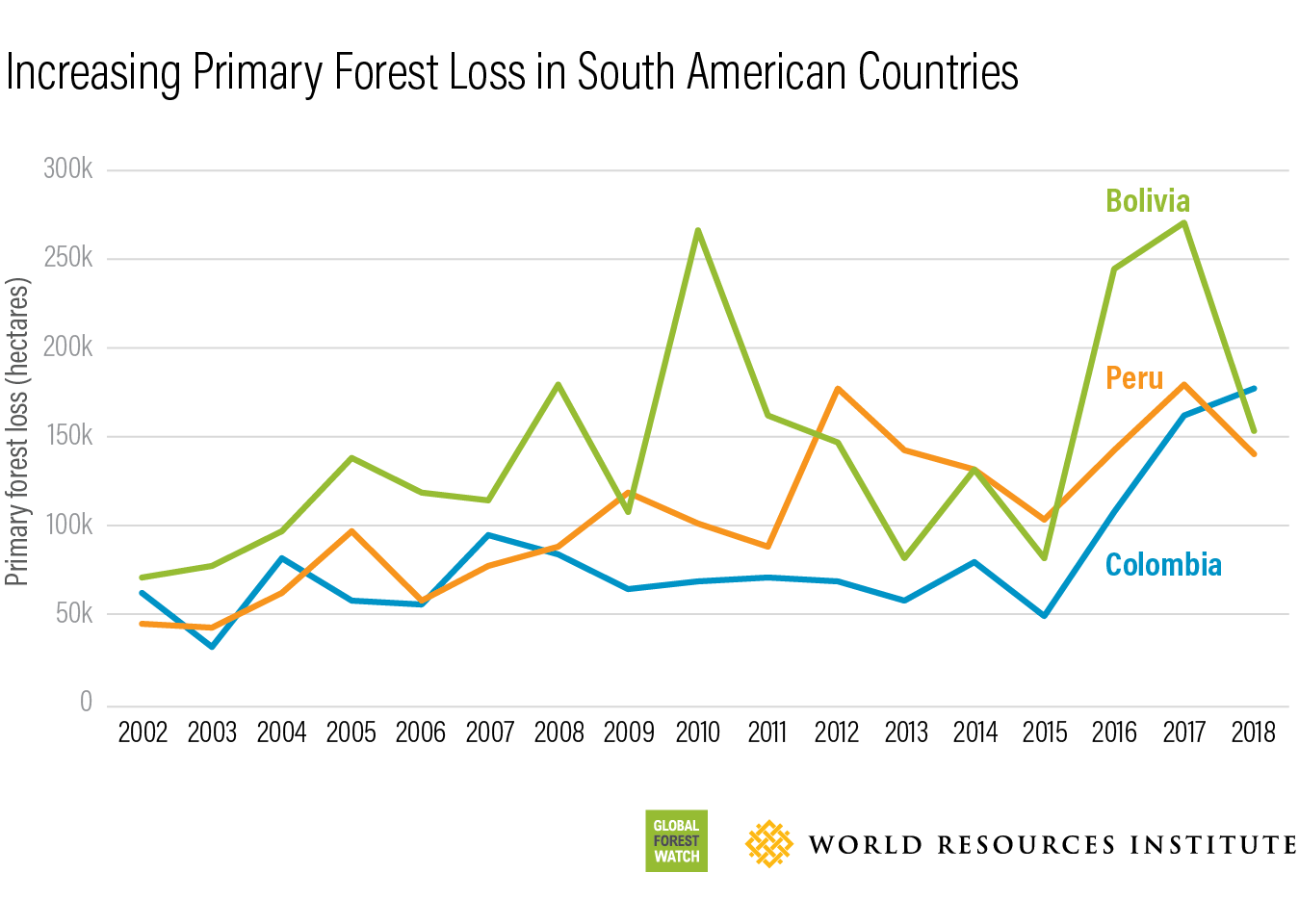 In Colombia, primary forest loss increased 9 percent between 2017 and 2018, continuing a dramatic upward trend since 2016. Ironically, this loss was related to the peace process, as areas in the Amazon previously occupied by the Armed Revolutionary Forces of Colombia (FARC) have opened up to development. Tinigua National Park has been an unfortunate casualty of the rampant forest clearing, experiencing around 12,000 hectares of forest loss in 2018, 6 percent of its total forest area.

In Bolivia, most forest loss was related to conversion of forests to large-scale agriculture and pasture, particularly in the Chaco. Forest loss in Peru, on the other hand, was generally for small-scale agriculture – including some illegal coca production. Peru also saw a proliferation of new logging roads in remote areas of the Amazon in 2018, as well as continued clearing for illegal gold mining in the south of the country.

New frontiers of loss are emerging in parts of Africa.

Ghana and Côte d’Ivoire experienced the highest percent rise in primary forest loss between 2017 and 2018 of any tropical country (60 percent and 26 percent, respectively). Illegal mining caused some of the loss, and while it is difficult to attribute the exact location and amount of forest loss, expansion of cocoa farms caused loss in both countries. Ghana, Côte d’Ivoire and leading cocoa and chocolate companies pledged in 2017 to end deforestation within cocoa supply chains. While this is a promising first step, the recent rise in primary forest loss—especially in protected areas, where 70 percent of the loss occurred—is a worrying sign. The cocoa sector needs effective monitoring systems such as Global Forest Watch Pro, set to launch later this year, to help reduce forest loss in future years.

In the Democratic Republic of the Congo, primary forest loss was 38 percent higher in 2018 than it was from 2011-2017. Expansion of small-scale forest clearing for agriculture and fuelwood likely caused about three-quarters of this loss. Some loss patterns suggest that new, medium-sized agriculture and conflict-induced population displacement have also contributed.
Finally, Madagascar lost 2 percent of its primary rainforest in 2018, a higher proportion than any tropical country. While most of this loss was caused by slash-and burn-agriculture, some was due to illegal mining for sapphires near the northern part of the Corridor Zahamena Ankeniheny protected area, as well as legal nickel mining in the southern part of the Corridor.

Hundreds of countries and companies have made commitments to reduce or eliminate deforestation by 2020. As we draw closer to this deadline, some countries are making real progress at reducing loss of primary forests, but many others are trending in the wrong direction. Early reports and the high rate of primary forest loss in 2018 suggest that we are not on track to meet these goals. Given the urgency to prevent runaway climate change and irreversible biodiversity loss, we need to rein in deforestation— before it’s too late.

BANNER PHOTO: Tropical Rainforest. Photo by Stokpic/Pixabay. Originally appeared on WRI Insights. The authors would like to acknowledge Peter Potapov and Svetlana Turubanova from the University of Maryland, who updated the tree cover loss data set.