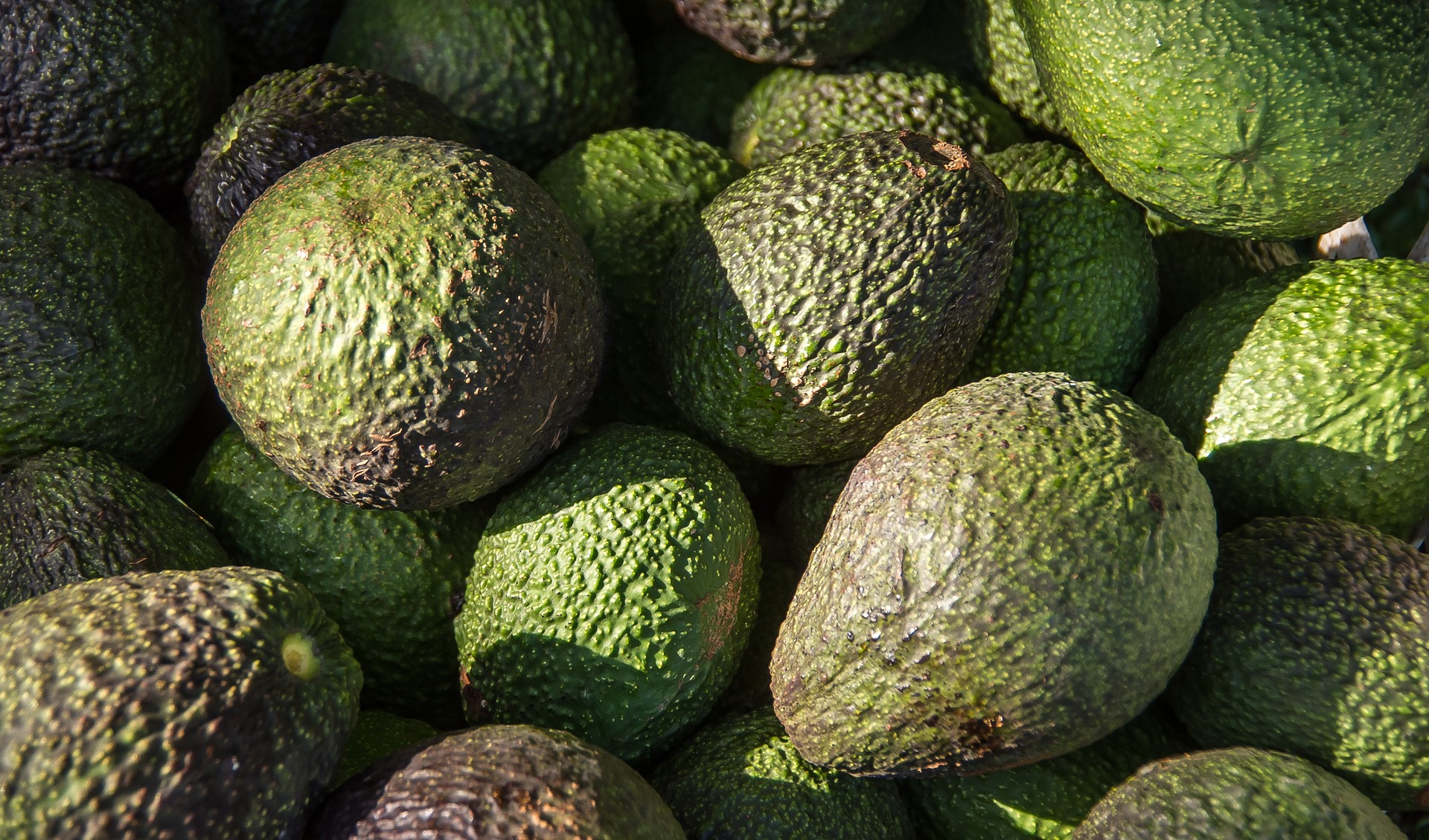 In 2016, the expansion of agricultural frontiers accounted for 98 percent of deforestation in Mexico. While the booming production of avocado (often referred to as Mexico’s “green-gold”) has contributed to the country’s economic growth, it has also caused deforestation and degradation in central and southern Mexican forests. To continue this economic growth without further deforestation, it is crucial that a comprehensive sustainability certification scheme be implemented to safeguard Mexico’s rich biodiversity. 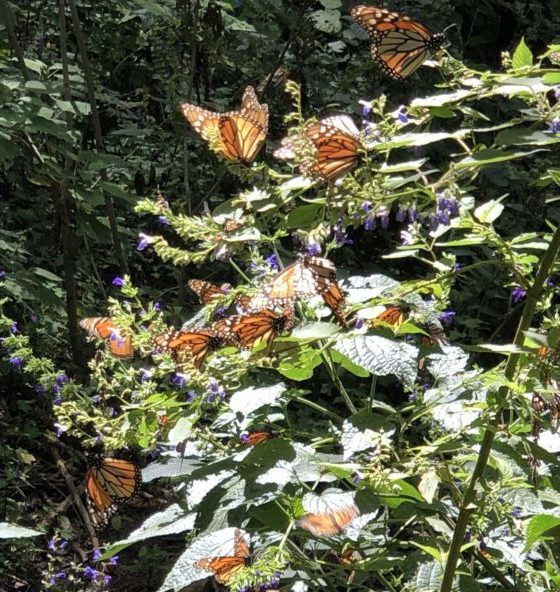 A popular “superfood,” U.S. per-capita consumption has increased by 440 percent in the last 20 years, driving much of this demand. The U.S. has become the largest importer of Mexican avocados, with 83 to 93 percent of its fresh avocado imports coming from Mexico. Michoacan, the only Mexican state that exports avocados to the U.S., has felt particular pressure from the increased demand, with between 14,800 and 19,800 acres of deforestation driven by avocado orchards each year.

Michoacan is also home to some of the most biologically important forests in Mexico. Each year, the Monarch Butterfly Biosphere Reserve (RBMM) plays host to one of the largest migratory events in the world: the arrival of millions of monarch butterflies that have traveled more than 3,000 miles from Canada to the forests of central Mexico.

While deforestation inside the reserve due to illegal logging has been reduced from its peak between 2003 and 2005, the expansion of avocado now poses a threat. Indeed, municipal subsidies for avocado have been encouraging forest clearing. In 2017, four of the six Michoacan municipalities that form the reserve received a total of 1.25 million pesos from the Ministry of Agriculture and Rural Development (SAGARPA) to create avocado orchards. While forested land owners in the RBMM can receive about 683 Mexican pesos (about 33 USD) per hectare as a payment for conserving ecosystem services, a landowner who plants an avocado orchard earns on average 1,317 pesos (68 USD) per hectare. 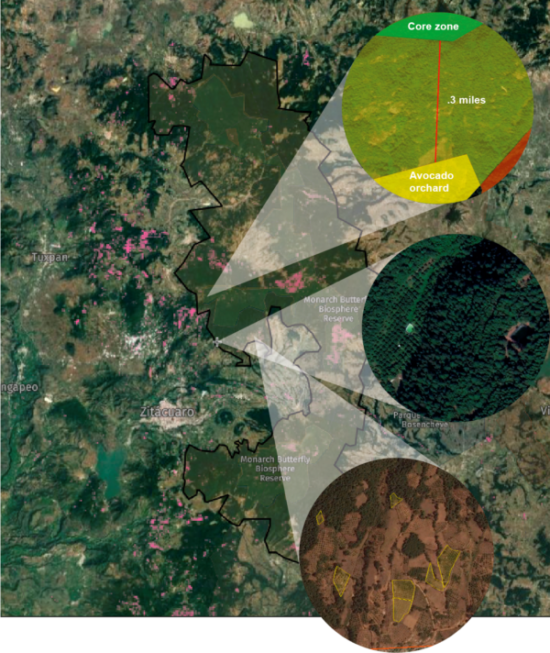 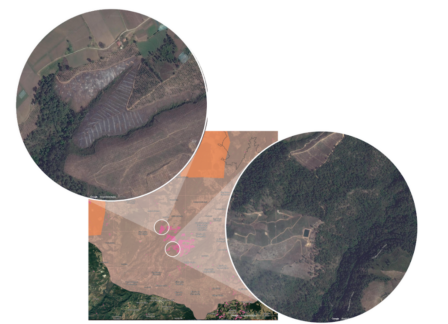 Natural Protected Area within the Basins of the Rivers Valle de Bravo, Malacatepec and Tilostoc in the State of Mexico. The tree cover loss (pink) shows how forests throughout this natural protected area are being deforested to establish avocado orchards. This can be seen in the amplified images.

The opacity surrounding land use authorizations in Mexico has also contributed to the increase in avocado orchards. According to research by Reforestamos Mexico, there are no records of government Land Use Change (LUC) authorizations for avocado in Michoacan after 2003. In 2017, 96 percent of LUC inspections resulted in the discovery of illegal avocado orchards and in most of those cases, no penalty was issued.

Similar cases have also begun to appear in protected areas in the State of Mexico, including the river basins in Valle de Bravo, Malacatepec and Tilostoc where deforestation poses a growing threat for several endangered species in addition to the monarch butterfly. The transverse volcanic leopard frog, arboreal alligator lizard, cougar and the axolotl all depend on the forest habitat for survival. According to GFW data, these protected river basins lost an area three times the size of Central Park between 2001 and 2017.

Some sustainable certification efforts for avocado are underway, but market participation has been low. A local sustainability certification program created in Michoacan in 2016 had less than one percent of farmers signed on by August 2018. Currently, only the Rainforest Alliance Agriculture Certification includes criteria that implies legal tenure of the land and approved Land Use Changes, which is a crucial piece of enforcing restrictions on forest clearing.

While many companies have pledged to eliminate deforestation from their supply chains, these commitments are mostly linked to commodities such as palm, soy, timber, pulp and cattle. So far there are no commitments of this scale for avocados. NGOs like Rainforest Alliance are working alongside government agencies to encourage a sustainable production strategy for Mexican avocados, but the support of key market participants, like U.S. retailers, investors and consumers, is critical to accomplishing zero-deforestation goals.

Incentives from retailers and consumers are essential for inducing producers to comply with the legal use of forest land and avoid deforestation. By making informed decisions, consumers can help bring about positive change — from more sustainable practices in avocado plantations, to more transparent product labeling and even boosted consumption of certified avocado. If consumers, retailers and producers work together to encourage sustainable production, we can ensure both forests and avocados are considered Mexico’s “green gold” for generations to come.