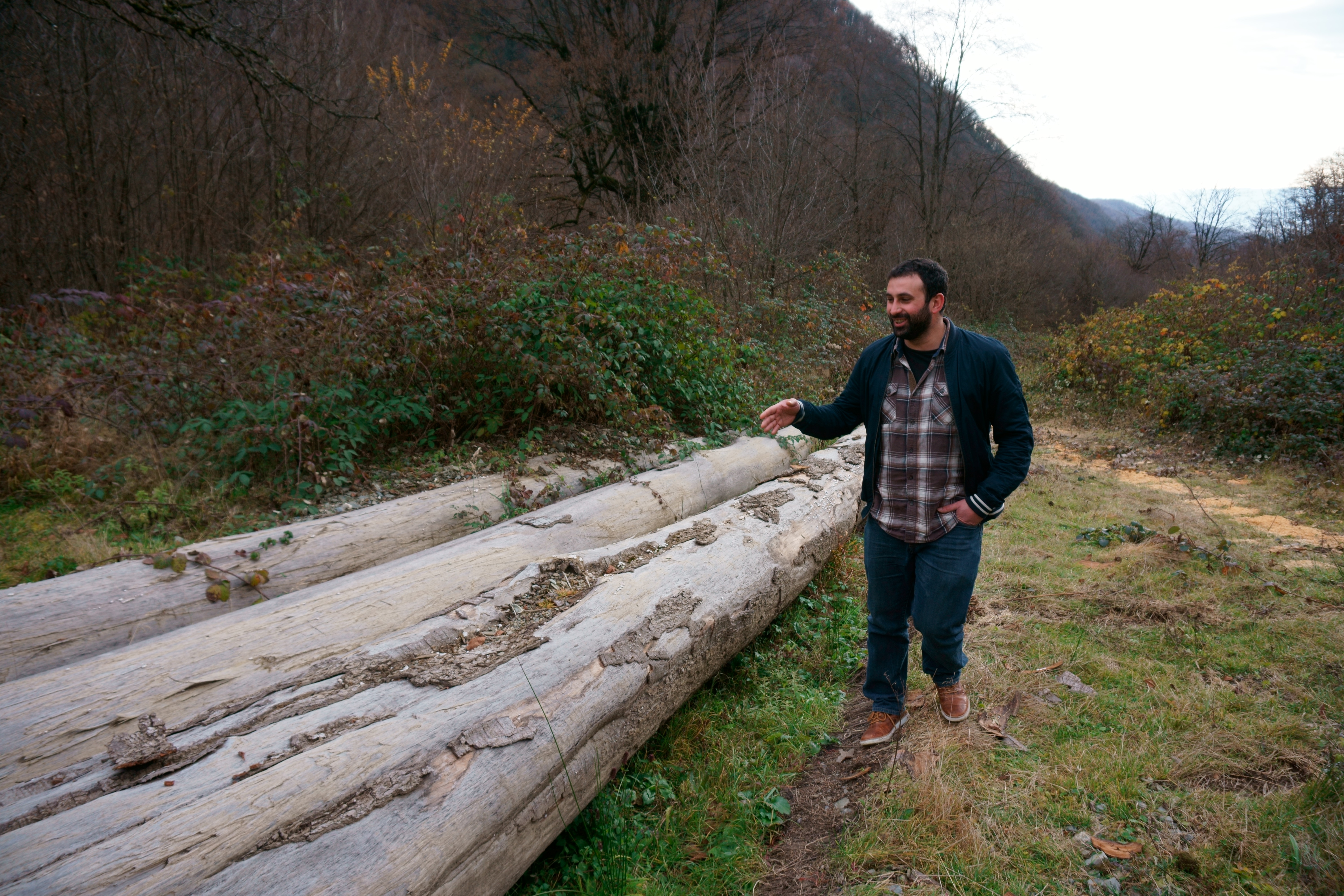 By
Inge Snip
Posted on January 24, 2019
Subscribe to the
GFW newsletter

Using Maps, This Community Fought a logging Company and Won

By
Inge Snip
Posted on January 24, 2019
Subscribe to the
GFW newsletter

The air is filled with the distinctive smell of burned wood in the tiny village of Sabue, tucked away in the crescent of the foothills of the Caucasus mountains. Misho Keinoshvili and his father chop wood for the wood burner to heat their house, while the sound of running water from the outside sink murmurs in the background. 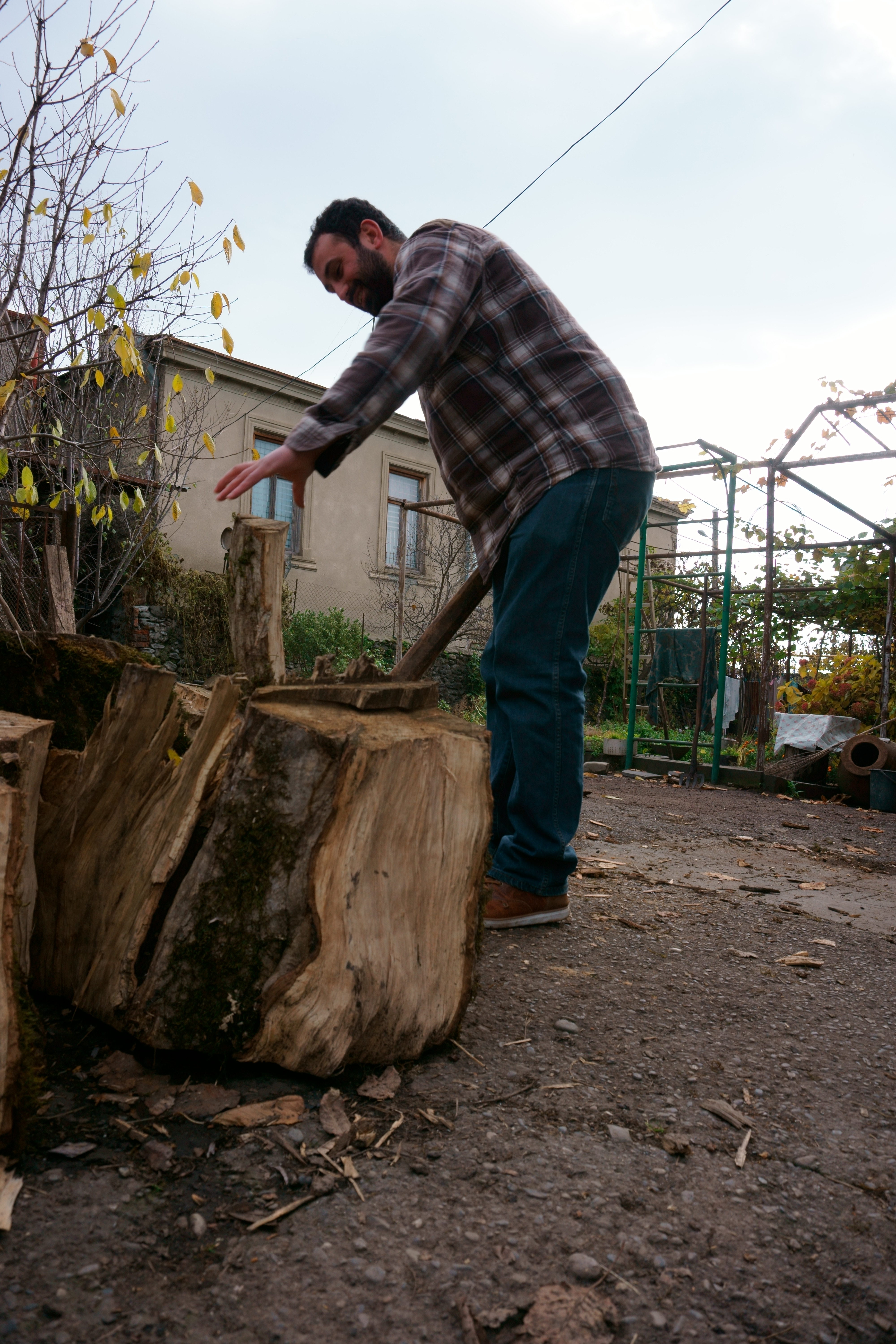 Resident of Sabue, Misho Keinoshvili, splits wood outside his home.

“It was probably the best day of my life,” Misho says while he gets a few new logs to split, “the whole village had come out, cheering and clapping.” The 27-year old law student speaks about the day the commercial logging company drove their hefty trucks out of their village.

That day marked the end of a years-long battle against a logging company that was legally permitted to cut trees in the woods behind the village.

The area assigned to the logging company lays right behind the village on the slope of the mountains. A small dirt path, partially paved during Soviet times, leads the way through an abandoned summer camp, past a tiny — still working — hydroelectric plant providing the village with electricity, and an ancient abandoned church positioned almost on the road.

To get to the logging site, you have to cross a crystal-clear creek with pipes that run water to the village. “This is our livelihood, this water is our drinking water,” Misho says as he crosses over the boulders in the water. It isn’t hard to imagine the pollution caused by 6X6 timber trucks driving day in and day out through the creek, the village’s main water supply, not to mention the damage heavy logging traffic caused to the fragile fourth century church.

“We couldn’t wash our clothes, we couldn’t drink the water,” Misho’s mother says, seated next to their wood burner on a worn-out floral-patterned couch. The moment the company came into the village, she explains, the water turned yellow brown, with a horrid smell. 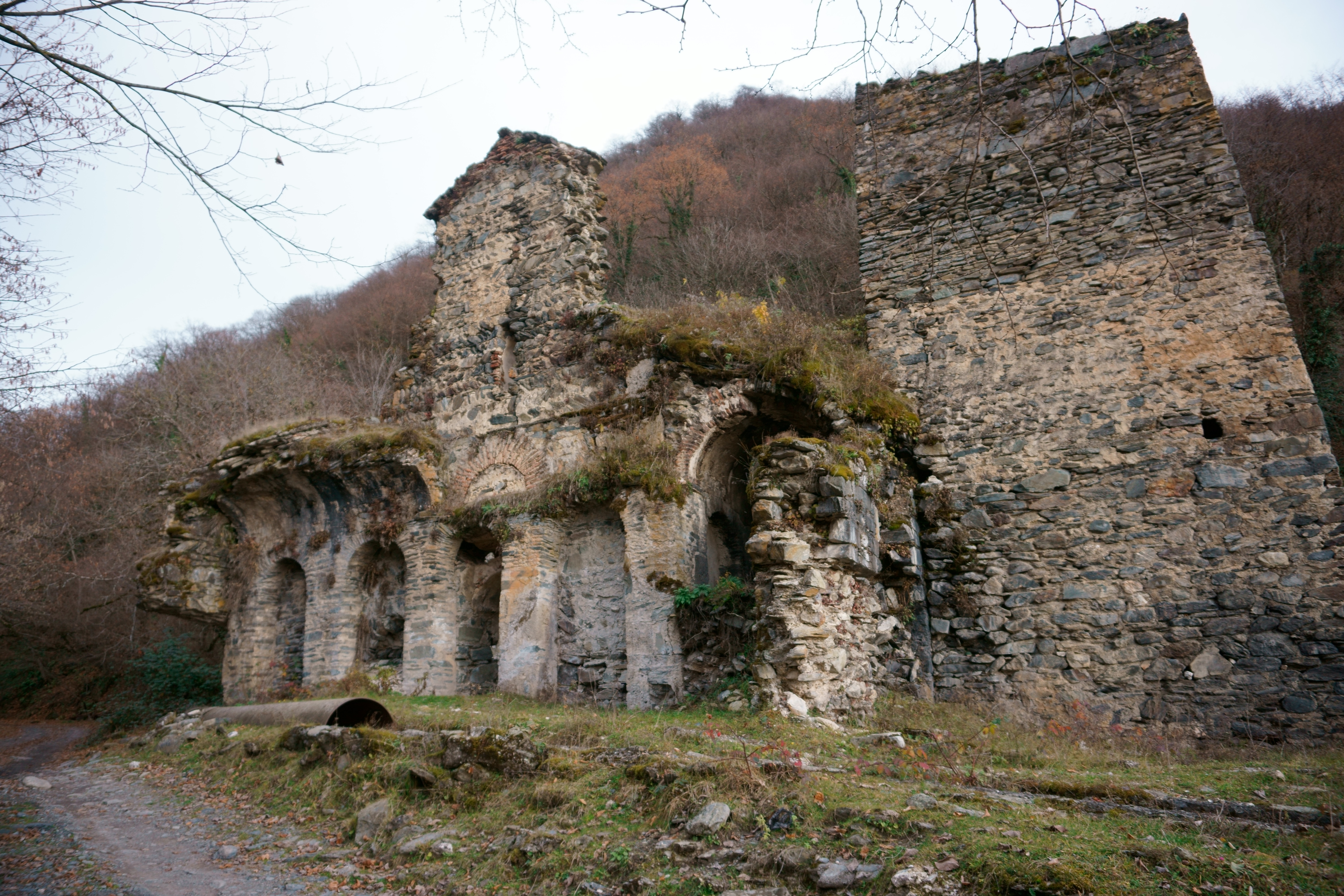 Ancient church along the road through Sabue’s forest that dates back to the fourth century.

According to Georgian legislation, trees cannot be logged on a slope greater than 35 degrees due to risk of erosion and potential landslides, or near a freshwater source due to risk of contamination. But it wasn’t until the Caucasus Environmental NGO Network (CENN) began investigating Georgian forests for high risk zones that the community realized the permit was given in an area that met these criteria and should not have been logged. 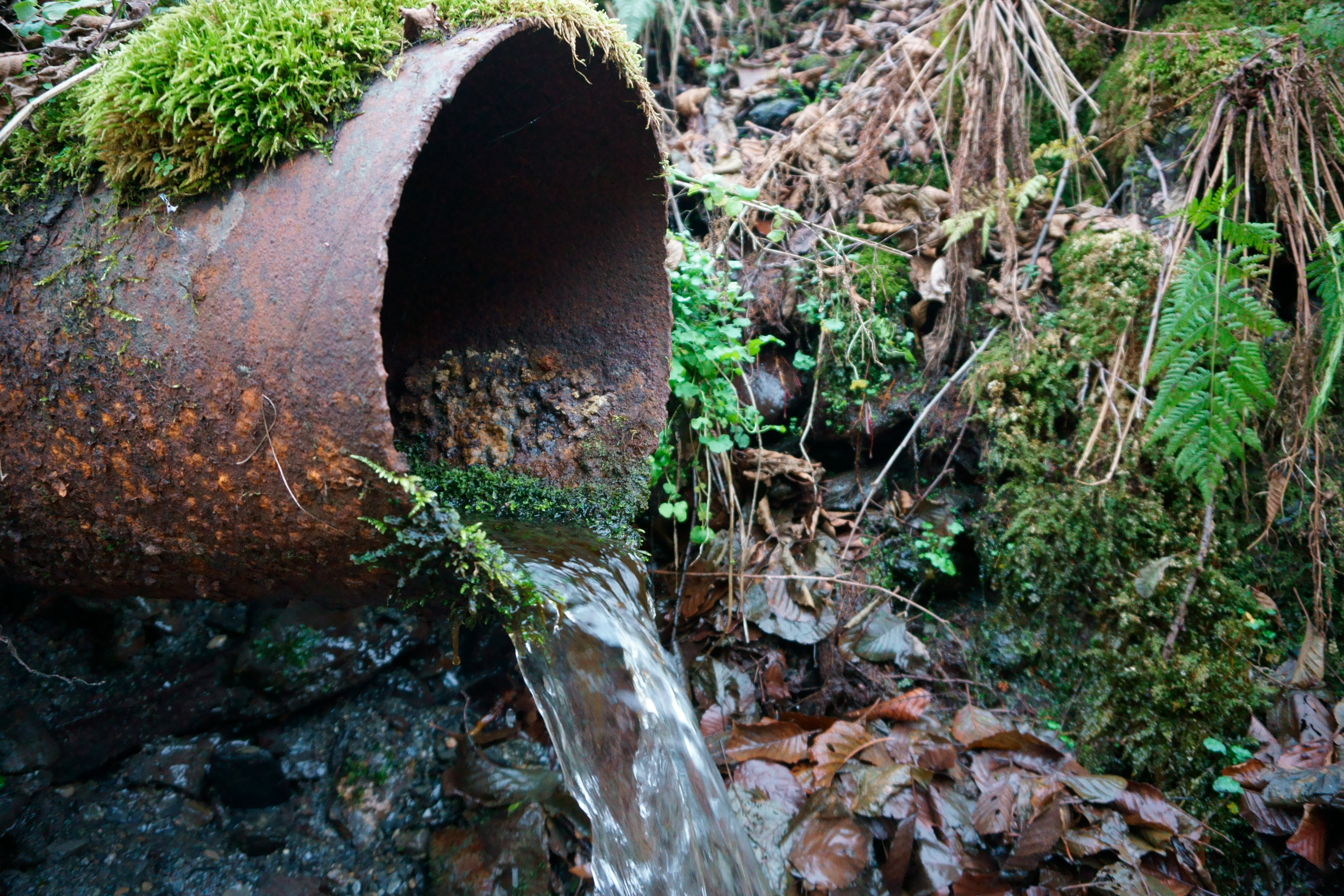 Sabue’s main water supply comes from the stream that ran through what used to be the commercial logging area.

Using their map building tools, GFW has been working together with the Ministry of Environmental Protection and Agriculture for three years to create a comprehensive Georgian Forest and Land Use Atlas, a project funded by the Global Environment Facility. The Atlas shows Georgia-specific data on land cover dynamics — including monitoring forest loss and gain, fire alerts, hazards and biodiversity.

By overlaying the hazard data with areas licensed for logging on the Georgian Atlas, CENN knew immediately that the area was not appropriate for commercial logging and should not have been given a permit. Noticing this, they reached out to the community, the National Forest Agency and the logging company to work towards a solution.

Although the logging company never showed up to the meetings that followed, the National Forest Agency and their rangers immediately understood that a major mistake was made by giving out a permit for the area. After hours of conflict resolution sessions, the Ministry settled on a solution. The company was given a different, lower-risk concession to log instead. Not soon after, the company packed up their business and never returned.

Part of the agreement struck with the Ministry was that the forest would be absolutely off limits for logging from then on, including to the people living in Sabue. The village, like many other remote villages in Georgia, relies heavily on firewood to survive the cold winters. But the villagers were given special vouchers to log trees in specific areas outside of the high hazard zone. The drive to the logging area takes about an hour on a dirt road through the forest, but it’s a drive Misho says the villagers are happy to take to avoid damaging the forest nearer to their homes.

“That part of the forest is sacred to us,” he says, “even in the most harsh times, we never took wood from there.” 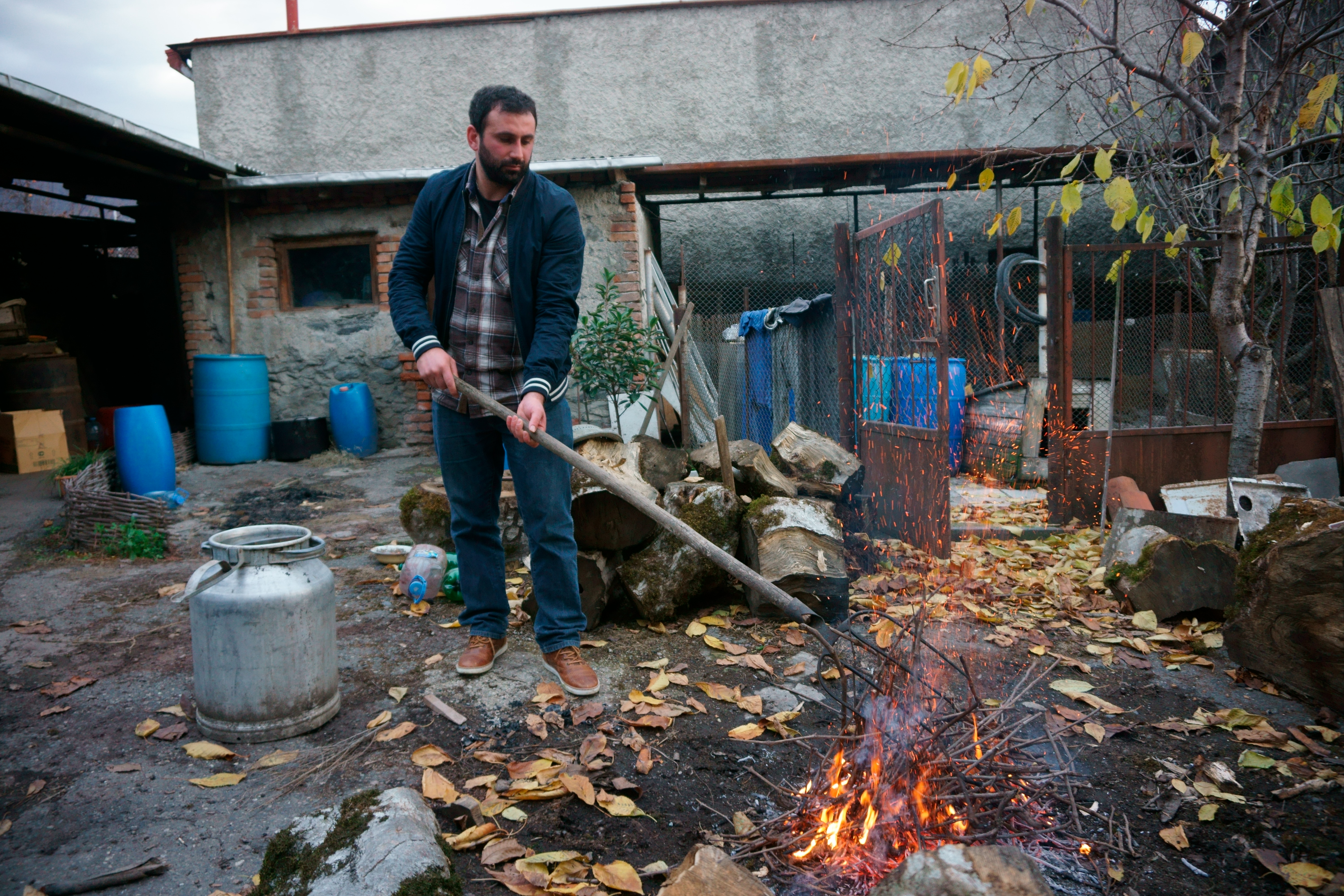 Sabue depends heavily on firewood for cooking and home furnaces. The villagers collect wood from forest areas that are not strictly protected.

Back in CENN’s office in the country’s capital, Tbilisi, Project Manager Ann Inasaridze says that it used to be extremely difficult to know whether an area would be viable for commercial logging, explaining “once they gave a lease to a Chinese company and it turned out there weren’t even trees on the area to be logged.”

But with the addition of GFW and Georgia’s Forest and Land Use Atlas, mistakes like the one in Sabue are much less likely to happen again.

“We’re working closely with the National Forest Agency,” Catherine Nakashidze of WRI explains, “to have them use the platform, sustainable forestry management is possible, finally.”

For communities such as the one in Sabue, if it weren’t for the Atlas, their fate may have been quite different.

“Our forests are part of our culture, our identity,” Misho says while walking through the ancient forest valley where the company used to log, “they are such a major part of our lives, and always have been, that they need to be protected — to make sure they won’t disappear.”

BANNER PHOTO: Misho shows trees that were felled and left when the logging company had their permit revoked. All photos by Inge Snip.